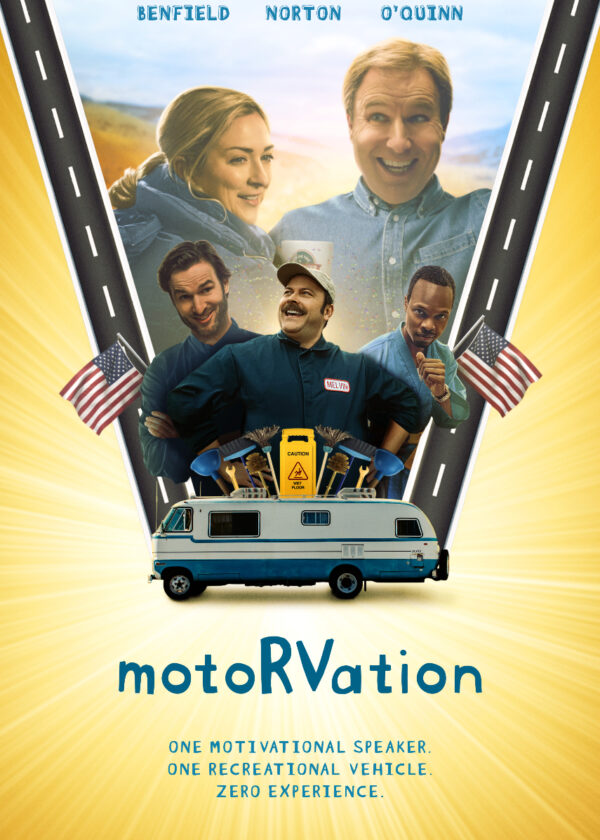 A small-town janitor / motivational speaker, stumbles along through life, until he has a personal revelation and begins ‘un-motivating’ the town, turning everything upside down in the process.

Motorvation works for a few different reasons, and one is because of the likable and quirky performance of Angus Benfield as Bob “Fatty” Melvin, an ordinary guy who winds up making a difference in several people’s lives. The acting is really good from the entire cast and Cammy Brickell as Lisa Cohen, a potential love interest for Bob, does a terrific job as a friend who could be more than a friend. And Judy Norton (Mary Ellen from The Waltons) gives a brief but fine performance as Kathy, Bob’s friend.

Bob’s brother, James, is a motivational speaker and author, and is swimming in the dough. He even buys a Lamborghini, a lifelong dream. However, his marriage went on the rocks sometime before and he really doesn’t seem happy. Bob (“Fatty”) is proud of his brother, and Bob feels as if his dad was always proud of him too and kind of overlooked Bob. But this will play a part in the plot as the story progresses. Especially after James tragically dies in an accident.

Lisa Cohen is engaged to a man with an inflated ego named Derek, but she likes Bob, even though he has been the janitor at her business for years and she doesn’t know it. And that’s another one of the pluses of this movie—it’s about the family and friends in one’s life, the people, that truly brings us happiness and being what God created us to be, instead of focusing on “more stuff.”

Lisa has sold her business to a company, Octocircle, which plans on building a mall, and right through their little town! Bob is not happy with the plans and wants to stop it from happening. In addition, he decides to follow his heart and to become a motivational speaker like his brother. He begins working on a book, and he travels around in a small motor home. He paints a sign on it which says, “Motorvation, the Fatty Melvin way,” and it has his image on it. A lady tells him he may become the next Tony Robbins. He doesn’t believe it but he begins to lead more by example than by his eloquence.

There are characters in the story, like Lisa, who see Bob’s kindness and sincerity, but there are others who call him “fatso” and see him as an imbecile. And the lawyers who are involved in the mall plans make life very difficult for him.

There are some bumps in the relationships along the way. But Bob’s dad sees the goodness in his son and apologizes for not showing him more attention while he was growing up. His dad had battled with drinking and he manages to finally stop. “Write your own story” or “Rewrite your story” are some nice themes in the film which adds value to the story. The idea is to let go of the old to make room for the new.

There are funny moments scattered throughout the film, such as when Lisa attempts to send Bob some texts, but his “old” phone (really old) isn’t up to receiving them. And when the words “Chase the American dream” is followed up by the sound of a toilet flushing as a certain character practices his speech, well—it will give the audience a chuckle.

Bob has to deal with greed and cynicism by others in order to push forward his message of the importance of family and friends. And he winds up at an extremely important town council meeting to decide if the mall will go through or not. We won’t give the ending away, but this film wraps everything up nicely, and the characters grow, which is a treat.

The film is geared more toward an audience of 12+ and has earned our Dove Seal for Ages 12+.

Here is a nice story with a likable lead actor, who offers hope that love and friendship can still conquer greed and ego.

A man refuses to give up on keeping his positive attitude among people who are egotistical and greedy; a man goes to a council meeting because he cares about the town; a dad apologizes to his son for not being in his life more.

OMG is uttered several times; Crap-1; You suck-1; Fatso is used against a heavy-set man several times; Fat Loser; You low-life piece of trash; Son of a… (Not finished)

A man is thrown down to the ground a few times but is not seriously hurt.

The drinking of wine and talk of having vodka and a barrel of wine; a character has dealt with drinking but manages to quit.