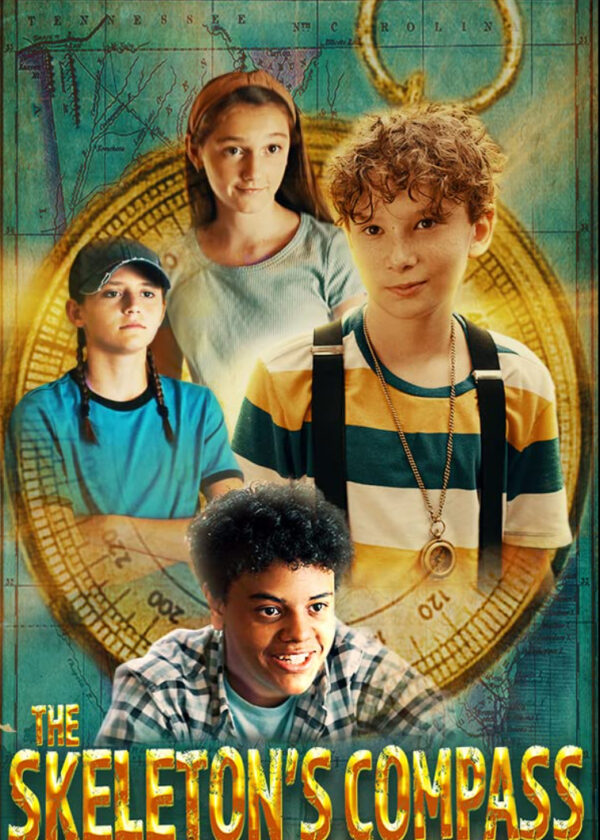 A group of middle school friends go on the hunt for treasure after finding a skeleton in the woods.

This fun movie features a group of likable kids along with a time travel plot. Champ (played nicely by Luke Loveless) is a boy who is loyal to his friends. The narration in the beginning makes note that his friend Stryker (Caleb Baumann) shared his lunch with Champ in the second grade when Champ forgot his lunch. Stryker is a bit offbeat, and he brings humor to the story.

Champ also tells the viewer about Jennie (Reagan Shumate), who lives two doors from him, and he says, “She’s smart and funny.” He also mentions Pip (Abby Grace Flynt), and says, “She can be annoying, but she’s Jennie’s best friend. She’s always just hanging around.”

Champ’s dad has been out of work for a while and the family is planning to sell their home and move, something which Champ doesn’t want to happen. His dad would like to start up his own business, but the funds just aren’t available. Champ sets up the story with a bit of history, noting that the Native Americans, the Cherokee, inhabited the Appalachian Mountains from the Carolinas and Tennessee to north Georgia, where he and his family now live. He said because his dad’s company started downsizing, that it’s kind of like when gold was discovered in the area in 1828 and the Cherokee were forced to move too. He adds his great, great grandmother was Cherokee, and married someone who wasn’t, so they stayed in the area.

Champ makes an observation-that the past is linked to the present and history is “more important than I thought.” He is playing “army” and shooting at unseen enemies when he discovers a skeleton, and it is wearing a compass. It says “sidanelu” on it, and that word will have more meaning later on. Champ grabs the compass and, in a humorous moment, says to the skeleton, “I promise to take care of your stuff-rest in peace-amen!” And he hightails it out of there along with the compass.

Upon learning of Champ’s find, Stryker tells the girls, and soon Jennie and Pip are a part of the gang, and they all try to figure out what exactly happened to the skeleton. In a noteworthy scene in the film, Champ also has found a journal and tries to read it, but he has a little difficulty at first because “it’s written in cursive!”

Champ learns of the history of Joshua Ryder, who wrote the journal in 1828, and about a wicked colonel and a mean man named Jedediah, who drinks a lot and didn’t thank Josh when Josh saved his life. Due to the help of the compass, Champ winds up back in 1828! In another funny scene, Champ’s friends soon join him in the past and one of the girls doesn’t like learning that the bathroom is ”outside”! And when Champ’s mom finds out about his excursion into the past, she doesn’t believe it at first, and says had he traveled back to 1828 that he would have been grounded! Champ learns about the gold that Joshua claimed, and since Champ knows he has Cherokee in his blood, he believes that the gold which Joshua hid belongs to he and his family, that is-if he can find it. In another comedic scene, Stryker fist bumps Josh, and says, “Dude,” and Josh wants to know, “Did I do it right?” Champ is sorry to leave Josh behind, as they have formed a bond, but Josh tells him, “We’ll always be connected, not even time can change that.”

Back home, Champ’s family is about to sell their home, but Champ is convinced the buried gold is nearby, and if they can just find it, it will save their home and also enable his dad to start his own business, as he has desired. How will it end? We won’t spoil the ending, but we will say the movie features nice themes about forgiveness and the importance of family. Champ puts it nicely when he tells his family and friends, “The best part was searching (for the gold) with you guys.” Due to these admirable traits, the film has earned our Dove seal for All Ages.

Join this likable group of kids as they journey back in time to learn about a treasure which can help them today!

Friends help a boy out in his search for the truth regarding a certain man and the gold he claimed; a man who was bad and drank a lot changes and saves a man’s life; a boy wants to share the gold (if they find it) with his friends.

A girl kisses a boy on the cheek.

A man holds a gun on a man; a man saves another man from being shot; an evil man pursues a good man; a bad guy winds up shot when he tries to take out a good guy.

A man drinks in a few scenes, and he is obviously drunk.

A girl is in shorts.

A bad guy wants to harm a good guy; tension.