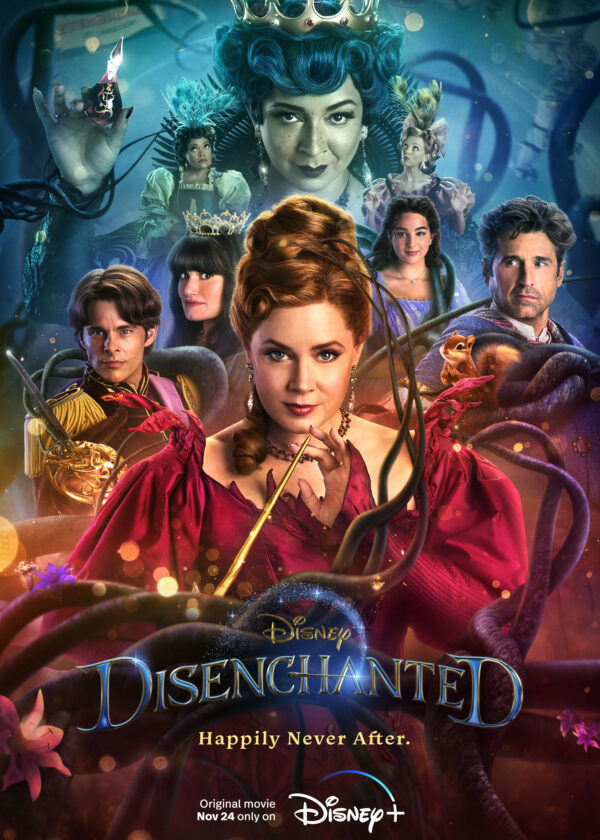 Years after their “happily ever after,” Giselle and Robert have a baby, Sofia, and Morgan is a teenager. Giselle and Robert decide to move to the suburbs to a place called Monroeville. Morgan isn’t happy about leaving New York and the city, and she isn’t given much hope when they arrive to a “fixer-upper” house. Morgan also feels like an outcast at school. King Edward and Queen Nancy visit from Andalasia to give Giselle a wish-granting wand that would only work for a true daughter of Andalasia. Giselle comes into contact with Melvina Monroe, the stuck-up leader of the town council. After a fight with Morgan, where the teenager says some hurtful things, Giselle decides to use the wand to make her life more like a fairy tale. However, that wish begins to turn Giselle away from the sweet heroine and into a villainous wicked stepmother, along with other major changes to the town. The wish also begins to hurt Andalasia. There is time to reverse the spell, but the wand is stolen. Will they be able to change everything back before it’s too late?

What if a “happily ever after” isn’t the end of the story? Disenchanted is the sequel to the 2007 popular film, Enchanted. Amy Adams and Patrick Dempsey return as Giselle and Robert, who are now married with a young baby, Sofia. Morgan, a child in the first movie, is now a teenager with an attitude. Giselle and Robert decide to move from the city to the suburbs, a town called Monroeville. Their house looks like a run-down castle, and they call it a “fixer-upper.” Morgan isn’t happy about leaving New York, and she doesn’t fit in at the new school. Robert has to commute, and he feels stuck and stressed. Giselle meets Melvina Monroe, the leader of the town, who puts obstacles in Giselle’s way to get involved in the upcoming fair. Morgan is angry and tells Giselle, “You aren’t my mother.”

King Edward and Queen Nancy from Andalasia have given Giselle a wishing wand as a house-warming gift, and Giselle wishes that her life would be like a fairy tale. The real world begins to transform into a fairy tale. That wish has consequences, however, making Giselle a wicked stepmother and harming her home country of Andalasia. There is time to reverse the wish, but the wand is stolen. Will they be able to change it in time?

Along with Adams and Dempsey, James Marsden and Irina Menzel are back in the sequel. Alan Menken and Stephen Schwartz come back to write the music. Fans of the original will like Disenchanted, which continues to make tongue and cheek references to Disney fairy tales, using them in a creative way while also giving the audience great themes of the power of love and adoption.

There are no problems with sex, language, nudity, or drugs. There is some light fairy tale type violence, and the only other negative issue with Disenchanted would be the discussions of magic, which is consistent with many of the Disney animated movies, both classic and modern. However, that might be a concern for some parents.

For positive aspects, there are some great themes in the film. First, there are consequences for trying to manufacture our idea of a perfect type of life. We should be thankful for the relationships and people we have. Second, the movie speaks about how love and our memories with our family and friends have power. Third, there is a strong adoption theme, where Morgan calls Giselle her “stepmother” and feels left out because she’s not a biological daughter. Giselle expresses how her love for Morgan makes her a “true daughter of Andalasia.”

There are several ways to have great conversations between parents and kids with this film. What are some ways that we are thankful for what we already have? So often we think having more stuff or a different life will solve our problems, but we must be grateful for the blessings of God that we already have. There is power in gratefulness. Next, bring up Ephesians 1:5 and how scripture says we have been adopted into the family of God through Christ. This makes us true sons and daughters of God by choice and love, just as Morgan was a true daughter through the power of Giselle’s love.

Dove Take – Disenchanted is a fun and heart-warming musical with great songs and important themes about gratefulness, adoption, and the power of love.

Giselle tries to “wish” and manipulate a perfect, fairy tale family, but it does more harm than good. She must be thankful for the life she has and see the beauty within it. There is a strong adoption theme in the film, where Morgan is Giselle’s “stepdaughter” but because of the “power of love” is just as much her real daughter as a biological one.

Fairy tale magic with a wand and fighting between two magical villains.