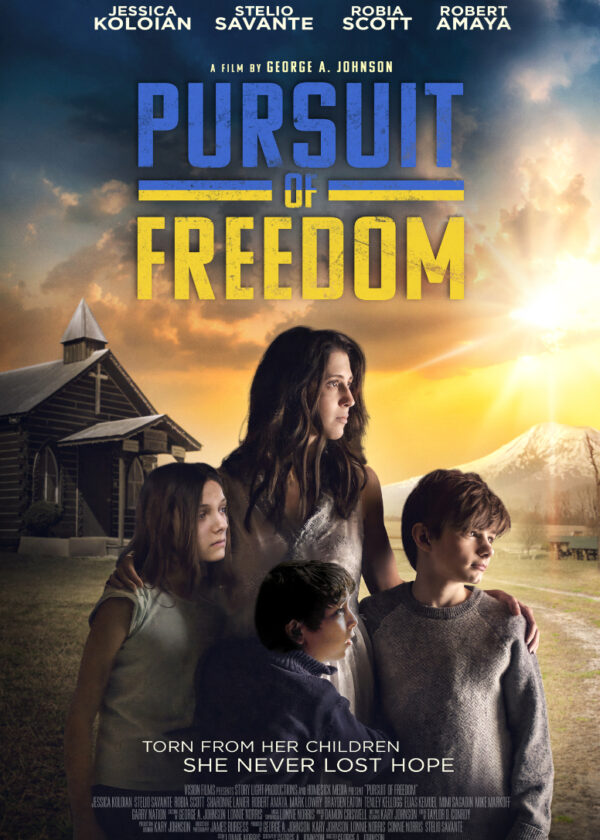 The real life story of a Ukrainian woman who was separated from her three children and sold into trafficking by Russian gangsters. Defying all odds, she survived to be reunited with her children.

Based on a true story, this hard-hitting film tells of a Ukrainian woman named Anna (nicely portrayed by Jessica Koloian), who is separated from her children when she is nabbed by Russian gangsters, and she is forced into trafficking.

The viewer will have to wait for the good stuff more toward the middle of the film and to the end, as the first sequences deal with the violence of the gangsters and them roughing up Anna’s gambling husband, Razmig (Mike Markoff), but also slapping her around, taking the children, and killing Anna’s father.

Anna undergoes a life that could only be described as a living nightmare, as she is forced to have relations with men and, as a result, years later it takes a toll on her health when it’s discovered she has cancer. Soon, the question becomes this-will Anna live long enough to be reunited with her three children? Her children include the oldest son, Armen, the daughter, Siran, and the youngest boy, Hovan.

Adding to the power of this drama is an excellent score, and its suspenseful plot as the movie moves ahead, and Anna must jump through more and more hoops as she is trapped in Amsterdam, and tries to find a way to travel to see her kids while not owning a visa or passport.

And quite effective in the film is Anna’s Dutch nurse, Naomi (portrayed by Sharonne Lanier), who is a Christian woman of compassion and she becomes a strong pillar for Anna to lean on. She helps support Anna mentally, as well as treating her. And, due to the help of a Pastor Bill, and an Armenian Christian man named Bedros, Anna has enabling help which she will need as the odds are definitely stacked against her.

The film features church scenes and various comments about praying to Jesus, and ends with John 8:36: “So if the Son sets you free…you will be free indeed.” The children come to trust the Lord too, and they pray for a reunion with their mother.

Pain and suffering are obvious themes of this movie, as well as waiting on the Lord for answers. But it nicely showcases the hope we have in Christ. As Anna, despite declining health, gets closer to seeing her children, the obstacles continue to plague her, including a plane that is apparently about to take off without the kids. But then a miracle occurs.

The weeks turn into months, the months into years, and the ending will be satisfying to viewers, which also includes a few major surprises as to what happens to all the main characters.

For anyone who has suffered obstacles in realizing a dream or reunion, this movie will resonate. It does feature some violent moments, and drinking scenes, but contains the powerful and gripping story of what happens when people trust the Lord. Therefore, it has procured our Dove seal for Ages 12+.

The family in this film undergo a lot, especially at the beginning, but the good stuff in this movie is worth waiting for!

Various Christian characters help both the mother and her three children; the mention of praying to Jesus and Bible verses.

Various Christians help a family while they undergo hardships; a woman takes kids in to help although she has little herself.

A woman is forced into trafficking although it is more hinted at than seen.

Several scenes of violence including a woman being manhandled and slapped; guns are held on various characters; a man is shot; several children are grabbed and kidnapped, and they are beyond frightened.

Men smoke cigarettes and cigars, and they drink a lot; some are drunk.

The hardship of a family being separated; gambling; tattoo on the arm of a character; characters are threatened.