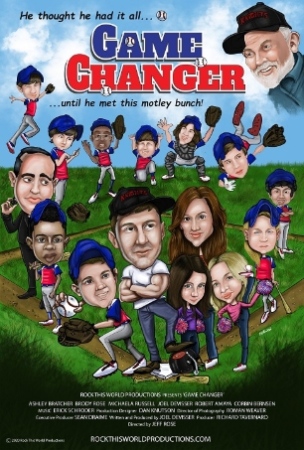 Game Changer is a family comedy that follows Jordan Gabriel, the richest, most famous, and best quarterback in the pros.  Don’t believe it?  Just ask him.  Eagerly awaiting a record-setting contract renewal, “only the best will do,” much to his dismay he’s suddenly forced to coach a little league baseball team.  Lohan Everette is still dealing with the recent loss of his father and is wanting to be his new middle-school’s star pitcher.  He is Jordan’s biggest fan – until he actually meets him.  As the baseball season progresses, “Coach” Jordan rebuilds Lohan’s trust and begins to rely on him, his mom, his adorable and hilarious 9-year-old sister, and the rest of the team as they turn their losing season around.  As Jordan begins to “stand in the gap” as a coach/father figure he begins to realize just how empty his life was when he only lived for himself as they all learn the importance of teamwork and using their God-given talents to help others in need.  Faced with the biggest dilemma of his life, and with his record setting football contract on the line, can he finally put another person’s needs before his own?

Jordan Gabriel may be pro football’s best quarterback, but he’s also insufferably self-absorbed — so much so that when a young fan asks for an autograph, the quarterback thinks the kid is misspelling his name. Actually, the young man was letting him know to whom the QB should address the autograph.

Gabriel (played by the movie’s muscular writer and producer, Joel DeVisser) is well on his way to landing the biggest contract in pro sports history, but an horrific lapse of judgment lands him in front of a no-nonsense judge. Clocked at 147 mph while street racing, Gabriel faces a contract-jeopardizing 90 days behind bars unless he can fulfill the judge’s outside-the-box option — coach the Johnson Middle School baseball team to the city championship.

To say the Johnson team resembles the “before” version of the Bad News Bears is to be generous. They are more like the Woefully Overmatched Warriors, a team that isn’t sure which end of the baseball bat is supposed to face the pitcher. And who should be the best player on that overmatched team than Lohan Everette (Brody Rose), the very fan whose jersey Gabriel wouldn’t sign?

So, Gabriel has to whip them into shape while dealing with other issues — most notably, a strained relationship with his aging Hall of Fame baseball father (Corbin Bernsen) who was never around when Gabriel needed him as a child. First, of course, Gabriel must get out of his own way and stop thinking that everything that befalls him is supposed to be about him.

“When are you going to realize that the world doesn’t revolve around Jordan Gabriel?” Lohan’s mom, and a potential girlfriend, asks him.

He doesn’t start to realize other people have problems until Lohan passes out after pitching a game. Gabriel hadn’t even done enough homework on the players he inherited to know that Lohan is a diabetic and could have died for the lack of monitoring his health.

That begins to change Gabriel’s outlook on life — that and some friendly advice from Tim, a believing friend, and Lohan’s praying 9-year-old sister.

He buys the team new uniforms. He lends fatherly concern to a player whose father never shows up at the games. More importantly, Gabriel’s willing to risk losing the championship, even at the risk of going to jail, to put Lohan’s health above his selfish concerns.

The movie has more than its share of slapstick-type humor, with pratfalls that seem out of place for an athletic guy who’s supposed to be a three-time football MVP. Real-life Hall of Fame pitcher John Smoltz even makes a cameo as himself. But there’s also a lot of feel good in this feel-good movie, and as such it merits the Dove-approved Seal for All Ages.

A pro football MVP learns from middle school baseball misfits that it’s better to help others than to help yourself.

Gabriel's friend, Tim, witnesses to him about the Heavenly Father wanting a relationship with him. Gabriel struggles with the concept, since his earthly father was absent; A little girl prays and tells Gabriel that her father isn't lost, but is in heaven. A boy prays to win a game to keep his coach out of jail.

A couple of teachers fawn over Gabriel and one paws his biceps. Gabriel flirts with a girl at a party.

Gabriel seems on the verge of a fight with a fan who says the QB cost him a fantasy football bet. They agree to street race instead.

None, though Lohan is a diabetic and requires meds and monitoring.