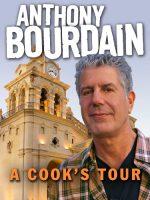 The #1 food writer and television host in the world, Anthony Bourdain reinvented the food travel genre. In his groundbreaking first series, Bourdain travels around the world indulging his taste for local cuisine and eccentric characters.

Traveling to other countries, sampling the best of their cuisine and presenting it to the world like a video menu seemed to be what Anthony Bourdain was born to do. He took such pleasure in his appetizing adventures on A Cook’s Tour, starting with a trip to Tokyo for the pilot episode — “A Taste of Japan.”

“Prepare to lose your mind,” Bourdain said as he toured the Tsukiji area with Kiminari Togawa, an elite sushi chef who shows that the difference in good and great meals begins with the selection of ingredients. Only the finest tuna, flounder, shrimp and octopi will do; no skimping can be tolerated.

Though Bourdain wasn’t known for expressing an affinity for Christianity, he acknowledged that “there’s something church-like, at least for me,” about his trips to foreign locales to taste what the locals eat. “There’s sense of solemnity here, there’s no nonsense, there’s no distraction, nothing fake about it. It’s the church of food. It’s the only church I know.”

Part of the reason A Cook’s Tour took off for its 35 episodes over two seasons was Bourdain’s willingness not only to play the bumbling American, ambling through the unfamiliar, but to unflinchingly contrast what he saw abroad to what he saw at home.

“Our restaurants are like gas stations — you pull in, fill up and move on, preferably as quickly as possible,” he said. “Volume is more important than quality. That says a lot about our culture.”

Unfortunately, Bourdain took his life while on a trip to France shortly before what would’ve been his 62nd birthday in June 2018. His appreciation for fine dining lives on, however, and his A Cook’s Tour merits the Dove-approved seal for All Ages.

Bourdain’s trips are an eclectic mix of the educational and entertaining, ambitious and even audacious at times, and even when the fare doesn’t look appetizing, you can appreciate his zeal for a good meal.

Faith: None
Other: None
Sex: Bourdain refers to sea eel as "the Viagra of the sea," for its legendary effects.
Language: A word is bleeped out as he refers to a tuna sandwich.
Violence: None
Drugs: Cigarette smoking, and sake wine.
Nudity: Sumo wrestlers, known as rikishi, seem exposed in their traditional gear (mawashis).
Other: None