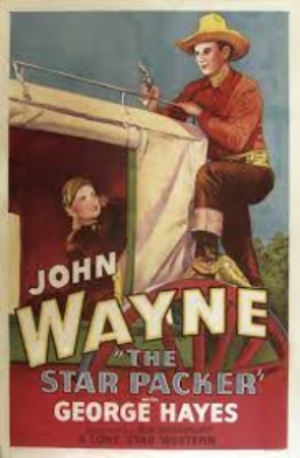 A gang working for The Shadow is terrorizing the town. John Travers decides to take on the job of sheriff and do something about it.

The combination of the exchange of gunfire and John Wayne always match up nicely and that’s exactly what you get in this film. Wayne stars in one of his earliest Western roles, playing John Travers. A villain known as “The Shadow” terrorizes a town and plots to use a machine gun on the locals. When the sheriff is killed, Travers steps in and assumes the office, determined to bring “The Shadow” and his gang to justice.

Joining Travers is his Indian companion, Yak (Yakima Canutt), who assists the new sheriff in a variety of ways. He’s determined to protect Travers. Travers and Yak work together to recover stolen money, which doesn’t set well with The Shadow. Interestingly, Gabby Hayes, who usually played a good guy sidekick in a lot of Westerns, plays a desperado named Matt Matlock in this film. The movie features some terrific villain names. In one scene Travers is with Yak, and spying on the enemy with binoculars. He comments that he sees Slippery Williams and Spike Morgan, appropriate desperado names.

In a subplot, a woman’s uncle wants her half of property left to her and to himself from her late father. He plots to scare her away. She shows she can handle herself when they show up late at night, presumably as ghosts, and she sends them away with several gunshots, actually hitting one of the bad guys. Travers works on getting a few of the gang at a time, and in a prolonged scene exchanges punches with one of the crooks. The fight goes on for a while but Travers eventually prevails. However, gaining total victory will not come easy. The suspense builds as, in one scene, a man is about to identify who The Shadow is when he’s shot and killed. In one of the neat action sequences, a villain is using a canoe to get away and is pursued downstream by the Duke or, as his character is named, “Travers”.

The film does a good job in developing a few of the main characters such as Travers and Yak. And its theme of being brave enough to stop bad men from doing bad things is commendable.

There is a bit of drinking in the film, and a man smokes a cigarette in one scene, and the aforementioned fist fights and gunplay takes place, with several characters meeting their violent ends. However, the only real blood is seen on the lips of a bad guy during a fight with Travers. The story of pursuing justice is terrific. The movie has merited our Dove seal for Ages 12+.

This Western will speak to people who commit to acting when a problem presents itself rather than just spectating.

Tension between characters; bad guys steal money; a man tries to steal from a relative.

Several characters are shot and killed; gun held on characters; fist fight with a man’s bloody lips being visible.

Drinking in a scene and a man smokes a cigarette in one scene.

Wayne’s chest is seen during a fight when his shirt comes loose from its buttons.

Tension between characters; bad guys steal money; a man tries to steal from a relative.