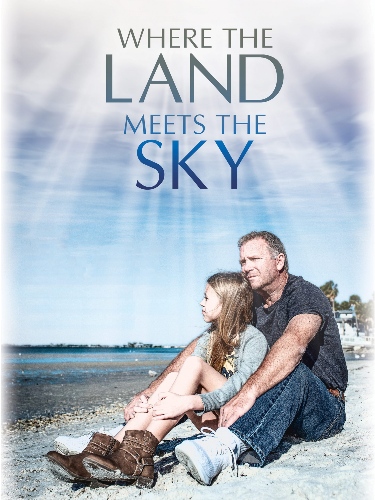 Where the Land Meets the Sky

After eight months of separation, Eric Rodgers must deal with the sudden death of his wife and the emotional process of reconnecting with his young daughter, Rachel.

Eric Rodgers blames himself for a tragic accident that resulted in a teen’s death. To survive the constant memory, he turns to alcohol. When Lily comes along and steals Eric’s heart, it seems that the memories grow quiet and alcohol loses its grip on him, but after the honeymoon phases and hype of being a new dad die down, the memories creep back. And as you might guess, Eric returns to the bottle.

Lily and his daughter Rachel leave, unable to force Eric to change. Less than a year into Eric’s new lonely season, Lily dies in a car wreck, forcing Eric at a crossroads where he must choose: the bottle or his daughter.

Eric wants to accompany Rachel on the trip to pour Lily’s ashes at one of their favorite family vacation spots in Florida. Since Lily’s parents are wary of Eric making that drive with their granddaughter, they send a trusted church friend, Sharon, along on the journey. Together, Rachel and Sharon witness Eric hash through hurt, open up to new friends who offer hope, and turn to God with hard questions and a much softer heart.

Alcoholism is a heavy, consistent theme throughout the film, including content that isn’t suitable for young children. However, the Christian truths of repentance and forgiveness come out on top, awarding Where the Land Meets the Sky Dove-approval for Ages 12+.

Where the Land Meets the Sky is a story of father-daughter restoration, as both discover what it means to forgive the past and let God restore what was lost.

Consistent themes of Christ’s love, forgiveness, and plans for a hope and a future.

Eric and Lily kiss several times, the couple seen lying in bed together, though fully clothed and within the confines of marriage.

A flashback scene shows a teenage girl crushed (and killed) after a stage prop accident; Rachel hits her head while playing and is left with a purple, bruised face.

Family tension/arguments, birthing scene (no nudity shown), character discusses cutting herself after losing her husband, a flag most noted for supporting Muslim terrorism is seen hanging in a hotel (moon and star flag).