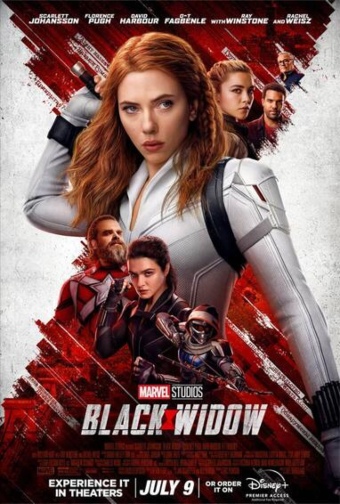 A film about Natasha Romanoff in her quests between the films Civil War and Infinity War.

There is a Bible verse that speaks of being “dead while she liveth.” While it is not for pleasure that Natasha Romanoff (Scarlett Johansson) lives, it might be the best way to describe the eponymous central figure in Black Widow. Because while we watch her back story, set between Captain America and Avengers: Endgame, we do so knowing that this is a woman who is already dead, having offered up herself on Vormir midway through Endgame. It was set in stone, so to speak, that someone must die in order to secure the Soul Stone, by which Thanos could be defeated. Natasha/Black Widow beats Hawkeye to the heroic act of sacrifice.

Fans of the Marvel Cinematic Universe have waited a long time for a female-centric superhero story, and when Johansson finally delivers it, it’s through a character who we know has already gone on to her reward. Not only that, but for her heroic act of sacrifice, it isn’t isn’t a movie that will gain Dove approval, given all the bad language liberally employed therein.

But, as we are to learn in Black Widow, there are themes worthy of exploration, well before Natasha will demonstrate “no greater love than this: that a person would lay down his life for the sake of his friends.”

General Dreykov (Ray Winstone), the power-hungry villain bent on stealing, killing and destroying, enslaves girls to do his bidding and become elite spies and assassins by means of the top-secret Red Room. It’s a Soviet brainwashing program where among other things are involuntarily stripped of reproductive rights — as Yelena (Florence Pugh), Natasha’s so-called sister, describes in perhaps the movie’s most hilariously blunt, scene-stealing clapback.

There is one thing that can reverse the effects of the Red Room and set a woman free — Red Dust. I’m not sure Natasha and Yelena understand exactly how this chemical antidote originated, but the synthetic gas sets Widows free from Dreykov’s clutches.

Whether that was intended or accidental, it’s reminiscent of what the blood of Christ does for us today — and it has much the same effect. As in Natasha and Yelena’s case, where the Red Dust emboldens them to actively take down Dreykov’s “kingdom,” so are we freed — and set free to set others free —  to take down Satan’s kingdom.

Even in movies that we can’t approve, there are themes/truths of which we do and Black Widow has a few.

Yelena’s favorite song asks, “Do you have faith in God above if the Bible tells you so?” But it seems clear that “the big god from outer space she refers to is not the Father, Son and Holy Spirit.

Families, even those non-biological, even those arranged for nefarious purposes, can still show signs of familial bonds.

The horror of human trafficking. Dreykov uses girls because he considers them recycled “trash” that the world has “too much of.”; Alexei makes a pass at Melina, calling her “beautiful” and “supple.”;

The Lord’s Name is misused two times. Sh– is used nine times. Also, “a–,” “d–n” and “pr–k,” a handful of times each. Foreign bad words are translated through subtitles, such as “b-tch” and “douchebag.”

It’s a superhero movie, so there’s all kinds of: fighting, gun play, the occasional choking and stabbing, an arm-wrestling match that comes to a gruesomely unfortunate end for the loser; explosions, an avalanche, crashing cars; It is through Natasha’s broken, bloodied nose that the path to healing is found.

Alexei bares down to his underwear, revealing a tattooed chest and a body that finds an old costume a tight fit; Natasha bares her bra-strapped, bruised back; women in form-fitting costumes.

Families, even those non-biological, even those arranged for nefarious purposes, can still show signs of familial bonds.