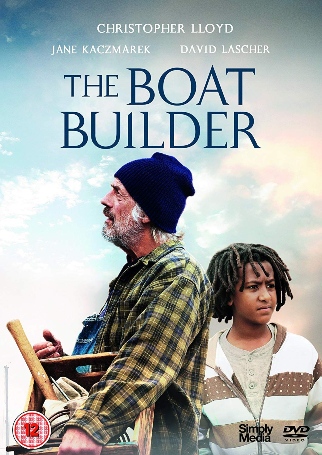 An embittered old mariner and an unwanted young orphan form an unlikely bond building a boat.

** — Editor’s Note: This review replaces a previous version, in which language concerns kept the movie from being Dove-approved. This review reflects the edited version of the movie that was resubmitted.

Now, we need more movies like this one! A crotchety old man in his late 70s (Christopher Lloyd) who wants nothing to do with anyone, even his adult daughter, takes to a young orphan boy in this heartwarming story. Christopher Lloyd has created another memorable character as Abner, the grumpy widower who is a retired Merchant Marine. The former mariner meets an understanding soul in Ricky, an African American orphan boy who lives with his uncle and aunt and two cousins, Donny and Ruth, but feels alone until he meets the elderly Abner.

Abner’s dream is to build a boat and to sail out to sea, one last time. Tekola Cornetet plays Ricky and he and Lloyd have an undeniable chemistry on screen.  This is one of Lloyd’s finest roles since his turn as Doc Brown in the Back to the Future trilogy.

The local kids (and some adults) think that Abner has been too long out in the sun without a cap on. He rides around town on his bike and when a lady calls to him, asking how his boat is coming along, he grumpily waves her off. When a local police officer sees him riding momentarily with one hand on the handle bars, he yells to him, “Remember, Abner, this is a two-hand zone!”

The scenery is amazing at times in this movie, and Abner rides past some trees and the area is bursting with green. He goes to a grave and removes old flowers and replaces them with new ones at the headstone. We later learn his wife has been dead for some time. A sunset which is seen later is also gorgeous, as it is bursting with various shades of blue, pink, orange and yellow.

Abner’s daughter, Katherine, played by Jane Kaczmarek, obviously cares for her dad, pleading with him to take care of himself and to give up riding the bike. “I already gave up the truck!” he exclaims. “How am I supposed to get around?” Kaczmarek is very good in her role as the concerned and pleading daughter. She doesn’t like her father living alone. At one point she says that at least he can’t send her to bed anymore without supper. “Did I really do that?” he asks. “Yes, a few times,” she replies. He looks crestfallen and regret is plainly seen on his face. But his soft side is clearly revealed when he looks at a wedding photo of himself and his deceased wife, and plainly misses her, commenting that she always “worried about me.”

Abner tells Katherine that the Eskimos send their elderly out to sea on a block of ice, and that “nature takes care of the rest. At least it serves some purpose in the food chain,” he says, adding that “polar bears love it!” Death is obviously on his mind, as he feels he has nothing to live for. He adds that happiness is something you outgrow. She asks him to have faith, and that he used to take her to church when she was a little girl. “I took you to see Santa Claus too,” he says, “it doesn’t mean I believe in him.” However, comments later come his way about Jesus, and he slowly softens a bit. He ignores the comments of “crazy” and “old man” and heads to his boat to paint and work on it.

The local officer confronts kids who are truant, and they tell him they’re not in school because it’s a holiday. They tell him it’s “Support your local officer” day. The officer loses his patience when one of the boys jokes the officer is about to go get donuts. After the officer leaves, the boys are soon heckling Abner again, even taunting him to fight them.

Soon, Ricky comes along and explains to Abner that the boys tried to “pants” him. Abner misunderstands and thinks they tried to put pants on him. “No, to take them off and put them up a tree,” he explains. He explains to Abner that his mother has died and his father has long been gone, and he is a “bastard.” He also explains that Jesus didn’t have a father (although Joseph filled that role), so he believes he is in good company anyways.  “Jesus? Jesus?” asks Abner, in disbelief. He can’t seem to get away from God! Ricky tells Abner that his mother is in heaven and can see and hear what he does. “She sees everything I do, so I can’t cuss,” he explains.

Ricky and Abner hit it off and Ricky is amazed by Abner’s determination to finish building his boat, so he offers to help. Later, the cruel boys come along at night and spray paint the boat, and cause problems, and even spray paint Ricky. When Abner comes outside, he sees the destruction and he believes Ricky has done it, because of the spray paint on him. But before long the misunderstanding is cleared up and Ricky is soon helping Abner again. He tells him he wants to help him finish it because, “that’s what friends do.” He even gets Abner to laugh. Ricky helps Abner paint the boat black, white and mahogany. And they joke about not getting “keel hauled.” They choose the name “Little Bastard” for the boat.

When the county inspector shows up from the zoning department, he tells Abner the boat is non-conforming to the area, and that he has to get it off the property within two weeks. This makes Abner determined to finish it. When Abner sails away a short time later, he finds a surprise onboard.

This story features some nice moments, such as the boy bonding with Abner. And it makes the point that loneliness is bad and that the two, Ricky and Abner, are better together than alone. There is the use of some mild language, scattered here and there, but the film has earned our endorsement and our Dove seal for Ages 12+ due to its wonderful theme of helping others out and the idea that God seems to place some unlikely people together.

The two leads, Lloyd and Cornetet, do a wonderful job in showing that two unlikely people can connect and help one another to not be lonely, and anyone who has ever been lonely will appreciate this film.

Jesus is mentioned in a positive way by a boy and heaven; a man doesn’t seem to believe in Jesus but softens a bit about him later in the movie.

A man learns to be kind to a young boy and the young boy is also kind to him; a man’s daughter continually checks on him and calls him to make sure he is all right; a boy’s uncle and aunt care for him and don’t allow their own children to mistreat him.

An innuendo of “That’s no way to get me into bed.”

Some boys spray paint a man’s boat and throw things off it; they spray paint a boy; boys threaten elderly man and young boy; a boy becomes agitated with his sister and keeps pelting her with his pillow.

A man finds a bottle of urine on his boat; a man misses his deceased wife; arguments and misunderstandings between a few characters.