Hope in the Holy Land 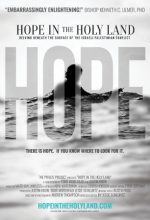 Todd Morehead, an American Christian with a deep love for Israel, sets off on a journey across the Holy Land to confront his indifference toward the Palestinians and to search for the deeper truths behind one of the most perplexing and polarizing conflicts in the world. Along the way, he discovers the painful struggles of Jews, Muslims and Christians on both sides of the conflict. The result is an enlightening journey that exposes viewers to perspectives rarely seen in the media, and a challenge to a man’s heart to love his enemy.

I’ve been hearing about the Israeli-Palestinian conflict since the late Walter Cronkite, the most trusted man in the media, sat in the CBS Evening News anchor chair. Never have I heard it so sensitively addressed as Todd Morehead, an American Christian father from California visiting the Holy Land, does in this documentary.

What makes Morehead’s attempt to understand the conflict is his honesty and transparency in doing so. Set aside what Cronkite, or Dan Rather or Peter Jennings, or any of ten thousand talking heads, have said about it, and hear it from the mouths of those living in the war zone, as Morehead does.

Morehead first sets aside his background — as a self-proclaimed Christian Zionist who was indifferent to the Palestinians — to see the conflict for what it really is. He relates to Jew and Arab alike, visiting their homes, cooking in their kitchens, surfing with them in the Mediterranean Sea. Though he’s a Zionist, he acknowledges, “If I grew up here and I saw IDF soldiers all the time with their guns out and even drawn on me, I think it’d be easy to hate them.”

What might be surprising is how so many of those interviewed simply want to peacefully co-exist, and Morehead does an admirable job of providing a balanced viewpoint. But the politics and the centuries-old schisms rise up as stumbling blocks. Those interviewed pull no punches. Some get along with their adversaries and others would take the first opportunity to kill them. Morehead walks on the razor’s edge, blurring faces and concealing names when needed for safety reasons while fending off those who would rather forcibly prevent their words from being recorded.

It’s a conversation that’s needed, sometimes blunt, and sometimes with images that can be jarring, and with an ending quote from noted German theologian and World War II martyr Dietrich Bonhoeffer — “the only way to overcome our enemy is by loving him” — merits the Dove-approved Seal for Ages 12+.

This documentary can’t heal the deep rifts in the Israeli-Palestinian conflict, but it does allow us to hear the hearts of those in the middle of it, in a refreshing, candid but balanced way, which might be the most hopeful aspect of the whole thing.

Faith: The conflict dates back to Abraham's sons, Ishmael and Isaac, and many Christians believe they have a duty to take Isaac's side, even if it means overlooking Ishmael's suffering. In the light of Christ, is this right?
Other: None
Sex: None
Language: The language isn't profane, but it is passionate. Palestinians call Israelis "murderers," express unfiltered hate.
Violence: The documentary contains scenes of graphic violence, and it blurs out some faces due to "safety concerns."
Drugs: Mild consumption of alcohol and tobacco.
Nudity: None
Other: None