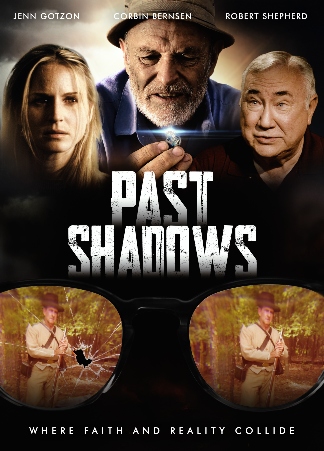 Past Shadows reveals the story of Professor Charles Bando, who suffers estrangement from his family who blame him for the kidnapping of his grandson. God works in miraculous ways, including use of a piece of glass from the Holy Land, to bring healing and reconciliation.

Charles’ grandson, Shay, was kidnapped on his watch. Now, Charles’ wife, son, and daughter-in-law blame him for what happened, and after everyone abandons him, he turns to the bottle.

With therapy and a weak, but viable relationship with God, Charles puts down the bottle and accepts a job as a professor at the local college, assigned to instruct a new class: Why Religion. There, he meets Monty, a young boy who only wants to pick up a record deal and give God the glory.

As Professor Charles’ class progresses, students are asked to highlight hobbies or interests that give them a deeper sense of purpose. Monty’s best friend brings in a set of glasses he created from a (magic) Jewish relic his uncle sent him. By accident, Monty discovers that these glasses have the ability to see into the past, but once several jealous Physics professors discover this secret, Monty’s now a target.

It’s up to Professor Charles to protect Monty, restore his family, and keep his relationship with the bottle at bay.

Past Shadows reveals the realities of family trauma and how unhealed wounds can lead to addiction, tear families apart, and challenge true faith. These are heavy themes throughout the film, but as Charles stays loyal to faith and family, and Monty and his friend boldly proclaim the wonders and power of Christ’s miracles, these themes of faith and integrity award this film Dove-approval for Ages 12+.

Past Shadows takes the magic of an old Jerusalem relic to intersect the lives of two college boys and their religion professor, changing the past, present, and future.

Hope in miracles and salvation in Christ are consistent throughout the script.

A young couple shares an innocent kiss; a female professor makes a deceptive pass at Charles.

Charles quietly struggles with alcoholism. He visits the bar and picks up the bottle multiple times, but never drinks. Monty is drugged with THP.

Heavy themes that include Charles’ grandson being kidnapped, leading to a strained relationship with his wife, son, and daughter-in-law; Jewish relic holds the magic to see into the past, several college professors display animosity; several outspoken, hateful non-believers make rude comments about Christ and faith in class.