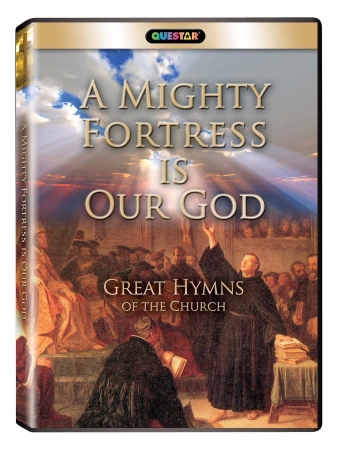 A Mighty Fortress is Our God

Great Hymns of the Church Sung in Church for Generations including A Mighty Fortress is our God Be Thou My Vision All Creatures of Our God and King O Sacred Head Now Wounded.

Narrated by George Sarris, it includes inspirational music from Aron Jasso, Amy Salter Rutherford, Ross Smithe, and Charlie Zahm. Directed by Ross and Julie Smithe, the biographies, paintings, and history that is shared is amazing. Possibly even more amazing is the fact that songs like “A Mighty Fortress is our God” are still sung and played in churches to this day.

The film kicks off with the song “Be Thou My Vision” by Patrick of Ireland.  Illustrating his story is a painting of the Ascension based on Matthew 28:19-20 and Acts 1:9. Another painting of Christ teaching his Apostles is another inspirational work of art. Then the narrator shares the history of the gospel being shared in Jerusalem and then spreading from there, to both Jews and Gentiles. A scene is shown of a group of ladies singing for the Lord, and then the camera is pulled back and we see children joining in with them. This testimony of God’s strength and blessings is nicely illustrated. It’s stated that soon after persecution hit the church, along with martyrs and the spilling of blood. We learn that Constantine eventually was converted to Christianity.

We also learn that Rome was eventually defeated but Ireland and Great Britain still needed the gospel. The Roman Catholic church eventually arose and the power of the papacy grew. In fact, it’s stated that Pope Leo the 3rd crowned Charlemagne king. It was a time of the papacy and then monasticism. Benedict wrote what became known as the Rule of Benedict, which promoted simple values. For a time music in the church was only practiced by the clergy and monks.

Another great hymn that is mentioned is “All Creatures of our God and King.” Featured with the songs is more church history, for instance the 4th Crusade, an effort to unite the Eastern and Western church. Feudalism and the friars are all examined, the charity of the friars. St. Francis of Assisi is mentioned as an example of a man that loved joyful songs. It is said that as he died in 1226 A.D. that he was singing Psalms 141.  “The Canticle of the Sun” is performed in the film, which he penned a year before he died. “All creatures of our God and King, lift up your voice and with us sing, Alleluia … Alleluia … ”

Next in the film we hear of Martin Luther and the Reformation, and his 95 theses. Soon we hear the wonderful song, “A Mighty Fortress is our God,” based on Psalms 46:1. We hear this blessed song in its entirety. This terrific film winds down with Psalms 100:4: “Enter into his gates with thanksgiving, and into his courts with praise: be thankful unto him and bless his name.”

How appropriate it ends with comments about Jesus, sent by God to save His people from their sins. And, as the credits roll, we hear another great hymn: “Shout to Jehovah, all ye Earth.”

This inspiring, wholesome film has easily earned our Dove seal for All Ages and merits being watched by families everywhere.

This wonderful film brings history to life with amazing songs and paintings and every family would be blessed to view it!

A powerful documentary based on scriptures, songs, and history.

Some bare-chested men are seen in paintings.

A few comments about Christian martyrs and spilled blood.

Some bare-chested men are seen in paintings.

Persecution is mentioned of those who stood strong in their faith.