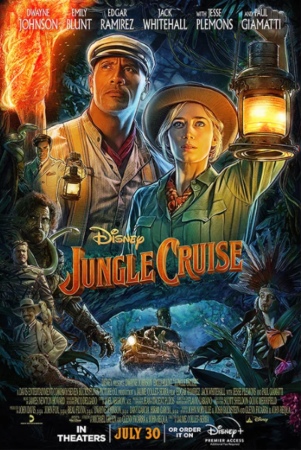 Based on Disneyland's theme park ride where a small riverboat takes a group of travelers through a jungle filled with dangerous animals and reptiles but with a supernatural element.

Jungle Cruise the movie is a high adventure down the Amazon with action, plenty of funny dialogue and humor, and a big plot twist just past the middle of the film. The chemistry of the actors is palpable and one of the delights of the film. Dwayne “The Rock” Johnson plays Captain Frank Wolff, who puts on a show for the people who take his riverboat tours. He tells stories of close calls, and even has natives show up in the weeds of the river, to give a moment of scary thrills.  He also speaks of the “back side of the river” flowing down in a waterfall, which is supposedly an added attraction!

Frank jokes that he once worked making orange juice but, “I got canned. I had a hard time with ‘concentration’. They put the squeeze on me.” His corny puns are so bad they’re good. He winds up taking on Lily Houghton (Emily Blunt) as a passenger, along with her brother MacGregor (Jack Whitehall). Emily is a tough, no-nonsense woman who wears pants, unusual for 1916, two years into the first world war. Frank calls her “Pants” and she calls him “Skippy” instead of Skipper, in her annoyance with him. It’s obvious that these two will either kill each other or fall in love. Lily’s brother is a bit on the prissy side, even bringing a ton of luggage with him to the boat, which Frank promptly throws overboard. He allows MacGregor to only keep a few suitcases for necessity. MacGregor admits in a scene later in the film that he hasn’t had success with women, and he would be ostracized for the “one” that he does love. He loves his sister as Lily is fiercely loyal.

Lily is hiding a special arrowhead, which is coveted by a German soldier, to use as a key to open the lock of another world of possibility, one that can bring healing as it pertains to the “tears of the moon.”  A lot of mystical powers play a part in the plot. The creepy scenes abound. For example, in one bar scene some men have a tarantula and scorpion opposing one another. This movie contains half men/half zombie like creatures. One species of man is made up of bees and honey, another species are half vines and snakes (and man). And Frank always seems to know more than he lets on, and Lily doesn’t think she can trust him. In fact, he won the job of guiding her on his boat by allowing his pet leopard, Proxima, to come into a bar, apparently ready to attack — and Frank promptly fights him and subdues him. His “show” wins Lily over and he lands the job of taking her to her destination. Proxima is really an easy-going pet and when MacGregor finds him on the boat, he and Lily learn this fact.

Frank also allows the “showman” in him to come out again a bit later when he and Lily and MacGregor are apparently captured by a tribe with an evil chief who is about to do them in. Frank jokes when they sail to where the tribe is that they are head-hunters, and it is “a terrible place to ‘be headed’! It’s really a charade, and the chief turns out to be a lady friend of Frank. Lily is livid!

We won’t give all the details away, but a lot of action and more humor show up in this fast-paced and action-packed adventure that takes place not only on Frank’s boat in the Amazon of Brazil, but also underwater, and it’s a mystical adventure that spans several hundred years. In one exciting sequence, Frank and Lily make their way to the bottom of the river, with Frank holding onto Lily as she can’t swim. They have a goal as they swim under the water, but Lily gets trapped behind a barrier and only by Frank “kissing” breath into her can save her, but will it be enough?

The German soldier pursues them, after Lily’s arrowhead, and he winds up showing up in a submarine. Both he and Lily are determined to use the arrowhead and the question is, who will win this race to find the healing power of the moon of tears, and the mystical petals which bring life?

This movie may well turn out to be a blockbuster, with its elite group of actors, and fast-paced plot, not to mention the monstrous-looking characters in the film. It has met the content requirements of Dove and has earned our Dove seal for Ages 12+.

This is one of those old-fashioned popcorn movies that will leave many family members, particularly the kids twelve and above, with gaping mouths wide-open-and it features a bit of romance for those who love some emotion in their movies.

The soul is mentioned.

There are characters who care about helping those who are physically or emotionally hurting.

Kissing between a couple; it's intimated that a character is gay.

Several “Oh my gosh” comments and it sounded like a few “OMG” comments during the action sequences; “H” mentioned as a real, Biblical place; “Oh Sh…(Not Finished)-1.

Several scenes of violence including fist fights; snake bites; monsters grabbing at people; a man is run through with a spear but survives; etc.

Drinking; a character drinks a lot of strong alcohol and beer is mentioned; some alcohol is spilled, and a leopard drinks it and gets drunk.