A Baby for Christmas 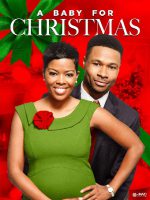 A group of orphans help a family realize that there’s more to Christmas than wrapping gifts and baking cookies.

This hilarious Christmas movie will bring the laughs any day of the year. The film centers on several family members and the various life situations they are dealing with every day. For instance, Marci (Malinda Williams) and Blair (Karon Riley) are about to become parents for the first time and Marci’s due date is the day after Christmas. Everyone says the baby could come on Christmas day, and Marci always replies, “The first baby is always late!”

Marci and Blair are stressing over being perfect parents. And Marci’s sister, Elizabeth (Chrystale Wilson), is all about her career and is up against a cocky male co-worker who is confident he will get the upcoming promotion they are both vying for. In a few comedic scenes when Marci has some contractions Elizabeth accuses her of trying to “upstage Christmas!”

And one of the plots circles around older parents, Donald (Gregory Alan Williams) and Myra (Deetta West), who are retired, but dad Donald is finding it difficult to enjoy the retirement. Their only daughter is married to a missionary and lives far away. Donald is used to working hard and now he feels useless. And, finally, Stephanie (Victoria Rowell), Marci’s and Elizabeth’s mother, is in love with a man named Lawrence (Kristoff St. John) who does missions work across the other side of the world. Their dilemma —can they somehow make this relationship work? Stephanie delivers a funny line when she means to compliment Lawrence on his meaningful work: “I admire your biceps — I mean your benevolence!”

Despite the serious plot points, there is plenty of laughter to be found in this witty movie. For example, during a false labor moment, both Marci and Blair say, at the same time, “You get the doctor! I’ll get the doctor!” In another scene Marci, who feels contractions, says, “Just be calm.” Then, unexpectedly, she lets out a big “Ahhhhh!” scream from the pain. The timing of it is hilarious. A few moments later, in the presence of her family, who are continually eyeing her, she blurts out, “Please stop gawking at me!”

A few of the conflicts that must be resolved include Marci wanting to continue her career but Blair’s concern that she be home for their daughter. Marci is upset but then begins to consider that maybe her husband has a point, especially after work becomes stressful. Is it time for her to let her agency go?

Donald winds up being needed to help assist a friend and this might just be what he needs to feel useful again. And Myra becomes a “pretend” grandmother to an orphan girl who misses her recently deceased grandma. And, interesting enough, Elizabeth begins to rethink the importance of getting ahead in her career. Could spending more family time be more valuable to her life?

One of the nice focuses in the film is the birth of Jesus, and we see children preparing for a Christmas presentation and we hear a nice rendition of “Away in a manger.”  One of the touching scenes shows Myra bow down in prayer with the orphan girl who has touched her heart. And the Bible references sometimes are laced with a bit of humor. For example, when Elizabeth considers the possibility that Marci might have her baby on Christmas day, she says, “What woman has a baby on Christmas-besides Mary?!”

The film makes a great point about the importance of working through family differences and overcoming misunderstandings, and the need to see things through the other person’s eyes. It also focuses on love and the importance of life going on-in the form of a new birth, and a brand new child being born into the world.

The film contains some mild language but meets our Dove content requirements and has earned our Dove seal for Ages 12+.

This funny, family-friendly movie will have you laughing in July as well as in December!

Faith: Christmas songs are sung and references to Jesus and his birth; two people kneel and pray in church.
Other: Some family tensions and disagreements.
Sex: Several kissing scenes between couples; a potential client wants to meet a woman at a “gentleman’s club.”
Language: Several uses of “OMG” and O/G”; H-1; Frickin’-1
Violence: None
Drugs: None
Nudity: Mild cleavage.
Other: Some family tensions and disagreements.