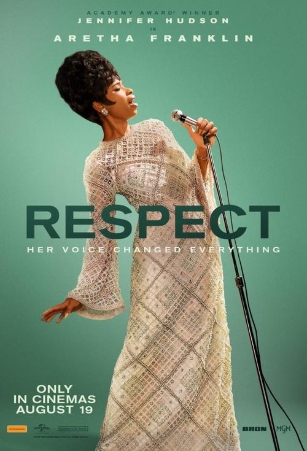 Following the rise of Aretha Franklin's career from a child singing in her father's church's choir to her international superstardom, RESPECT is the remarkable true story of the music icon's journey to find her voice.

It was a long, winding and sometimes hard-to-watch path that brought the daughter of a prominent, but abusive pastor to life as the Queen of Soul. Aretha Franklin lived it. The biopic Respect gives that life a sometimes glossy and often dark retelling, and has now gone on demand scant weeks after its release in theaters.
Let’s get the cautionary stuff out right up front — there’s sex and violence (some of it implied in the same act), there’s adultery, there’s bad language and an unhealthy dose of alcoholism. If that’s what automatically disqualifies a movie, then Respect is not for you and in the strictest sense, it is not a Dove-approved movie.
But there is no redemption without something to be redeemed from, and Respect does not shy away from pointing out Aretha’s “demons” any more than Exodus shies away from Moses’ Egyptian-killing past or any more than Acts sidesteps Paul’s church-persecuting ways. Though we should hasten to add that church life is hardly idealized by this movie, the bigger point is that we all have something from which we need redemption and Respect shows it in Aretha’s life.
Before she died in 2018 at the age of 76, the Queen of Soul was well aware her story would be told, was personally involved in bringing it to the screen and tapped Jennifer Hudson as her personal choice to portray her. It’s the role of a lifetime for the Dreamgirls star Hudson, already an Academy Award and Grammy winner and one of the few with the vocal chops to pull it off, even if she doesn’t really try to sound exactly like the queen. But if Respect was just about singing, there wouldn’t be enough positive elements to recommend it, despite the fact that we’re not approving it.
What recommends this two-decade highlight of her career from 1952 to 1972 is the Prodigal Son-like path she takes from young, Gospel-singing prodigy to R&B superstar and back to her faith in Jesus. As the Scripture says, “Train up a child in the way they should go, and when they get old they will not depart from it.”
Aretha tries to depart from it. She runs from her father, the Rev. C.L. Franklin (played by the gifted Forest Whitaker), a Detroit pastor who was one of the most prominent preachers of his day, but whose prominence conceals a dark side. That chases her into the arms of first husband Ted White (played against type by the normally comedic Marlon Wayans), who is even more abusive. Aretha isn’t just looking for R-E-S-P-E-C-T, she’s looking to S-U-R-V-I-V-E.
Along the way, with many trials and lots of errors, she finds her voice. It becomes powerful enough that she can stand with the Rev. Dr. Martin Luther King and the Civil Rights movement. It becomes powerful enough that she sings at his funeral after his 1968 assassination. It becomes powerful enough that Aretha can demand she be allowed to do a Gospel album, even when the studio executive insists that nobody wants to buy Gospel music. It goes on to become “Amazing Grace,” recorded in 1972 at Los Angeles’ New Temple Missionary Baptist Church — her best-selling album and the top-grossing Gospel album of all time.
If the movie has some of the feeling you’ve seen it before, it’s probably because it adheres to a familiar formula. It brings to mind other musical biopics — the ode to Tina Turner in What’s Love Got to Do with It and the nod to Ray Charles in Ray. Like those movies, it has the fledgling days of obscurity, the meteoric rise to stardom, the dark and rocky middle, followed by the triumphant ending.
It isn’t an easy watch, but Respect can be a rewarding one. Minus the coming back to Jesus, it probably wouldn’t have been close to being approved, just as Ray wasn’t or What’s Love Got to Do with It wouldn’t have been, had we reviewed it. (It was before Dove’s time.) But with the story arc bringing us back to the ultimate redemption, Respect came close to an 18+ rating. Taking the Lord’s Name in vain is almost always a deal-breaker for us, and we could’ve gotten the redemption angle even without it.

The arc of redemption, in which Aretha traces a Prodigal Son-like path back to Jesus, makes this a biopic worth watching, but the language detracts from it.

Though she's the daughter of a prominent Detroit pastor, Aretha takes some of her most enduring lessons in faith from her mother, who dies of a heart attack before her 10th birthday. It's this faith that she returns to as she completes an arc of redemption.

Plenty of kissing scenes, a butt-grabbing scene, and much more that is implied.

God's name is taken in vain multiple times. Racial epithets aimed at both Black and White individuals. Also a--, b-st-rd, b-tch, d-mn and a few others. Police are referred to by disparaging names.

Pre-teen Aretha is raped behind closed doors and is pregnant soon after. Her pastor father C.L. pulls a gun on her boyfriend Ted. Ted becomes her husband and gives her a black eye. He gets in a fight in a studio session. Aretha also gets into a table-flipping altercation with Dinah Washington over a song.

Alcohol flows a little too freely. Aretha takes solace in drinking to excess. Smoking too, including marijuana.