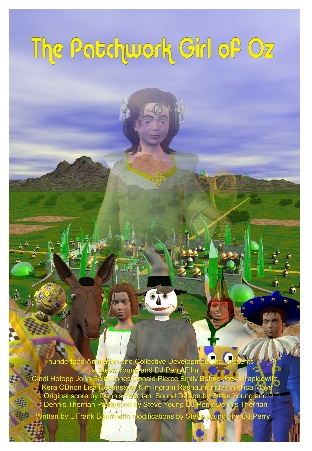 The Patchwork Girl of Oz

Ojo is a little Munchkin boy who is nicknamed "Unlucky," and indeed, some dreadful things happen in his life, particularly when his beloved Unc Nunkie is turned to marble because the work of the Crooked Magician had some unexpected effects. Ojo sets off on a journey to collect certain items in the land of Oz — a six-leafed clover, water from a well that's never seen light, three hairs from a Woozy's tail, various stuff like that — so that the Crooked Magician can concoct a formula to free Unc Nunkie, along with the equally marbelized magician's wife. Joining Ojo on the quest are a couple of the magician's creations, the Glass Cat (with a brain that you can see work, she conceitedly repeats to everyone she meets) and the Patchwork Girl. One of the funnest parts of the book is what happens when the Scarecrow meets this vividly constructed new Patchwork Girl, whose name is Scraps.
5
Negative Rating
12345
SexLanguageViolenceDrugsNudityOther
3
Positive Rating
12345
FaithIntegrity

Few people know The Wizard of Oz is only one of eight books in The Oz book series. The Patchwork Girl of Oz is book seven, which takes readers—and, in this case, viewers—on another magical adventure through the Land of Oz.

Young Ojo and his not-so-lucky uncle visit Dr. Pipt, a nasty man who defies Oz’s law excluding the practice of magic for everyone except Glinda the Good Witch. This “crooked magician” offers false hope to Ojo and his uncle, presenting the possibility to put an end to all their bad luck. However, when one of Dr. Pipt’s charms goes wrong, he petrifies Ojo’s uncle, turning him to marble.

To save his uncle, Ojo must gather five ingredients throughout the Land of Oz so Dr. Pipt can create a reversal charm. Ojo meets all sorts of new friends along the journey, like the Patchwork Girl, but a few classic characters including Dorothy, the Scarecrow, the Tin Man, and a different sort of Lion make their own debuts. Together, with the help of his friends, Ojo discovers that goodness is a choice, and no amount of luck will ever control his life.

While this cartoon film promotes sacrifice, bravery, and friendship, parents should note that concepts like magic, spells, and charms are sometimes used for evil in this film, including Dr. Pipt’s attempt to create “the power of life” potion. Luck and trickery are other themes warranting discretion. Yet, because these elements present opportunities for healthy conversations with children, and because righteousness and character are celebrated, The Patchwork Girl of Oz is Dove-approved for Ages 12+.

The Patchwork Girl of Oz takes viewers on a new journey through the Land of Oz as young Ojo discovers the power of choosing what’s right.

Cartoon violence including a porcupine quilling characters and a plant monster gulping characters, but no gore.

Lots of magic, including bad characters who create “petrifying” charms/spells to harm other characters, references to witches (as wicked creatures), and trickery/deceit.