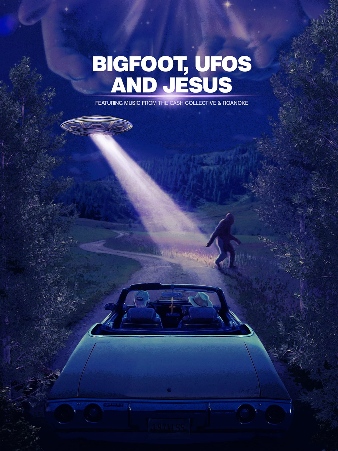 A lifetime ago in a sleepy Michigan lake town, Hannah Howard (Melissa Anschutz) experienced something otherworldly. For years the event was pushed to the corners of her mind, seemingly forgotten until a trip home starts unlocking her past memories. Can her advice-giving, hippy-mother (Victoria Jackson) or the small town preacher (Don Most) or her newly discovered, bigfoot-hunting brother (Josh "Ponceman" Perry) help her make sense of it all? To add to the growing mystery, the strange events have started again upon Hannah's return. Strange lights appearing in the sky over a place locals call the Devil's Crossroads.

When you watch this movie, you will watch a movie that is based in realism but is inspiring in its message of hope and forgiveness. Starring Melissa Anschutz as Hannah Sweet and Don Most (who played Ralph Malph on Happy Days) as Pastor Milo Williams, the film is about facing the past with God’s help and some forgiveness too.

In the opening sequence Pastor Milo is seated in a car with Harris Howard (Dean Teaster), and they are looking for UFOs while discussing the Bible.  Harris says a lot of stories in the Bible sound like Close Encounters. He mentions the woman turning into a pillar of salt, giants the size of trees, a lake of fire, and Elijah going to heaven alive in a flaming chariot. “There are a lot of unexplained things in the Bible,” concedes Pastor Milo. Suddenly, there is a burst of light in the sky and the two men jump out of the car with the plan to take photos. But Harris, clutching his chest, falls to the ground, the victim of a heart attack.

In the next scene, we see Hannah at an interview, drinking wine, already inebriated, and spewing out sarcastic remarks. She used to be Hannah Howard, Harris’ daughter, but has become a big country western darling in Nashville.  It is obvious the fame and wealth has not brought her happiness. She speaks of being the “whore woman” girl from a little lake town in northern Michigan. “Nothing ever really happened there, that’s why I left. Mom was a singer and Daddy was an ex-soldier. He drank. My father was a horrible drunk. He was abusive to me and Mama.”

She adds that things got so bad that her mother “went crazy and up and left us. But that’s how I got strong,” she adds, but it is obvious that she is not strong. This story will resonate with anyone who has ever had a difficult upbringing or has observed others in abusive relationships.

Hannah’s manager insists on the camera being turned off and questions Hannah, whether she can perform that night or not. They argue and he yells at her, telling her she has already burned all her bridges in Hollywood. Her manager, Marty, tells her that she walked off a TV show, cancelled her Grammys appearance, and “cursed at Dolly!” He tells her if she messes this one up, they’re both done. He adds he’s given her 20 years of his life. He threatens to quit, and she tells him he can’t because he’s fired. She breaks a glass in a dramatic moment in the scene. Hannah receives word that her father has died in Michigan.

We see Hannah arrive back in the small northern town of Lost Heart (the movie was filmed in Whitehall, Michigan), and a young boy says, “Miss, you ain’t from around here, are you?” She is wearing tight black leather pants and doesn’t blend. “No!” she replies, and then says, “Don’t be touching the car!” (she has arrived in an expensive one).

The film is peppered here and there with Hannah’s memories. She recalls her father shoving her mother to the ground. “Daddy, I’m sorry!” she remembers saying, and her father replied, “Sorry is for sinners!” The boy sees her condition and asks if she’s all right. She heads into a diner.

There she sees Elsie, her cousin, and Elsie tells her they loved “Pops” (her father). Hannah, during the course of the movie, begins to hear about the man who was her father and how he had changed into a good and caring man. Elsie is star struck and wants to become a famous singer like Hannah. Elsie’s boyfriend, Sterling (Shane Hagedorn), wants her to remain in Michigan. She currently works at the little diner.

In a memorable scene Hannah, who has a flat tire, almost takes the Lord’s name in vain in front of the pastor, and Pastor Milo (excellently played by Don Most), says, “Why are we so quick to invoke damnation on His name every time we do something clumsy or stupid? Maybe we should damn ourselves for our own lack of judgment and mistakes!”

Hannah, while standing in front of her father’s corpse in the casket, spits toward the corpse and a young man with Down Syndrome, Chip (humorously played by Josh Perry), is amazed. When first meeting Hannah, the first thing Chip says to her is, “You have dark lipstick.” “You have Down Syndrome,” she replies. Chip looks at the pastor and says, “I like her!” What Hannah doesn’t know is that her father adopted Chip, making him her stepbrother. “You know who this is, right?” asks Pastor Milo. “Of course,” Chip replies, “if I didn’t people would think I’m retarded.” Josh Perry does a great self-deprecating acting job with the character of Chip and he had me laughing and smiling several times. After Hannah spits at her father’s corpse, Pastor Milo asks what happened. “Spit happens!” he says. The movie features several flashback scenes and the people of Lost Heart, Michigan catching Hannah up on who her father became. She learns he changed after she left home following an argument with him.

The film does a good job in showing the battles various characters struggle with, including Sterling’s insecurity about Elsie trying to make it as a singer, and Hannah trying to make peace with her mother and with the memory of her father. In an interesting twist, the pastor and others believe that the spotting of bright lights and UFOs might actually be UFAs, “unidentified flying angels.”

Hannah doesn’t show up at her father’s funeral, but will she leave town or attend the graveside ceremony? The movie has a strong finish and emphasizes the need for forgiveness before a person can move forward. Chip cries at the funeral and anyone who has lost someone to death will feel his pain.

The film includes a few crude remarks and smoking scenes, and, due to its mature themes, we are awarding it our Dove seal for Ages 12+. It has earned it, due to its themes of compassion, asking the Lord for forgiveness, and the need to forgive others. And it has a great line near the end: “The devil can’t take what we don’t give him.”

This inspirational movie is a blend of drama, heartache, comedy, and features a wonderful theme of the need for forgiveness which anyone can relate to.

A strong message of finding forgiveness in the Lord; a few Bible comments.

Several scenes of arguments and tempers flaring; disagreements between characters; a woman says she sold her soul to the devil but we later find out that this was only talk; tattoos on woman’s arm.

OMG: A woman comes close to using the Lord’s name in vain with a “G…” and later a “G…D….” but she doesn’t; “Shut Up”; “That drunk”; ”Crap”; a man uses a crude remark about having to go to the bathroom to urinate.

A woman breaks a glass in anger; flashback scenes of a man shoving his wife to the ground and his sister punches him; heated arguments.

A couple of drinking and smoking scenes; a woman drinks wine and pours alcohol into a drink; a comment about marijuana being legal in Michigan and another character says, “I don’t think that’s exactly right.”

Several scenes of arguments and tempers flaring; disagreements between characters; a woman says she sold her soul to the devil but we later find out that this was only talk; tattoos on woman’s arm.