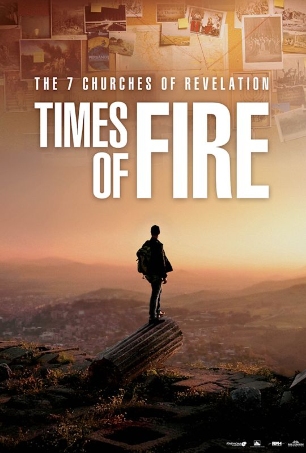 7 Churches of Revelation: Times of Fire

An investigative filmmaker examines the letters of Christ given to the Apostle John to share with the 7 Churches of Revelation, hoping to find connections to current world events. Traveling to Turkey to uncover archeological insights into the 1st Century Church, he discovers keys to their persecution by the Roman Empire. Scholars and theologians weigh-in to connect these ancient churches to the modern Church of today. Are we ready for Times of Fire?

Of all the places that the Lord Jesus could’ve chosen to reveal Himself as King of Kings and Lord of Lords, it was a little island in the Aegean Sea, as famous now as it was remote and unheralded then. Not Jerusalem. Not Rome. A little island called Patmos.

That’s where the Apostle John, who’d proven himself faithful throughout the years by taking in Jesus’ own mother and by recording smaller revelations — the Gospel that bears his name, as well as 1 John, 2 John and 3 John — received visions of things to come in his old age. He was there, having been exiled by the Romans “because of the word of God and the testimony of Jesus.”

So that’s where a French investigative filmmaker named Christophe Hanauer ventured — a place still remote and unheralded — in search of the meaning behind Jesus’s letters to the seven churches of Revelation — Ephesus, Smyrna, Pergamum, Sardis, Thyatira, Philadelphia and Laodicea. Just his ambling through historical sites is fascinating, even though he only gets to the first three stops in this documentary. The other four churches were scheduled to be examined in documentaries to come in 2022 and 2023.

With the help of local scholars, theologians and ministers, Hanauer takes us into a cave that local tradition says is where John saw the vision, to the place where he prayed, meditated and slept. He takes us into a monastery where one of the oldest copies of the Gospel of Mark is kept.

But it isn’t just for the history that Hanauer made this trip to the island and then to western Turkey, where those seven churches were based. His idea is to tie the past to the present and to the things which are to come. The idea is for the viewer to ask himself and herself, “Are we ready to stand strong for Christ, no matter what?”

Hanauer says he came away from his trip with a renewed understanding of what it costs to walk with Christ.

“The letters to the churches and the whole book of Revelation resonate as a tremendous encouragement and a strong call to believers to become victorious,” he says. “The victory described in the book of Revelation is not a promise for the believer to escape the test before them, but to face it head on, with faithfulness and courage, rooted in their first love of Christ.”

It is a thought-provoking trip that’s intended for us today, because Jesus invites those who have an ear to ear to eavesdrop on what the Spirit is saying to the churches. We all can find ourselves with kindred experiences to what those seven churches experienced, and the answers Jesus gave them should be considered lamps unto our feet as well. It merits our Dove-approved seal for All Ages.

The letters to the seven churches are mined for meaning in today's world, although only three — Ephesus, Smyrna and Pergamum — are covered at length in the documentary.

Tales of martyrdom and of Christians suffering grisly fates for refusing to compromise their stands for Jesus.