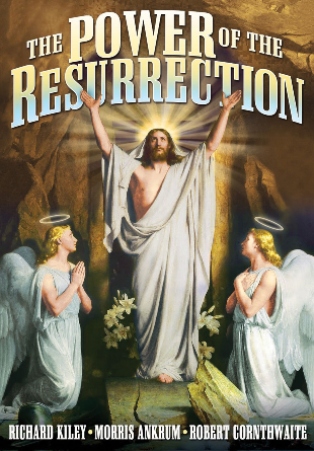 Power of the Resurrection

A young man who faces torture and possibly death for his Christian beliefs confesses his fears to Peter, who awaits a similar fate. Peter tells him of the fear he felt just after Jesus' arrest in the Garden of Gethsemane, when he denied knowing Him three times - and yet Jesus told him that he would be the rock upon which the Church was built. Peter goes on to relate the events of the passion week, including the Christ's crucifixion, resurrection and ascension.

The Power of the Resurrection does a commendable job in sharing the inspiring story of the influence of Jesus on the disciples, particularly Simon Peter. From the opening sequence, with Peter witnessing to a young man while in jail, to the ending when he preaches a powerful sermon after being filled with the Holy Spirit on the day of Pentecost, this is a remarkable film.

As one follower of Jesus is taken from the cell, a young man cries and Peter, to quiet him down and calm him, begins to tell his story of walking with Jesus. “Loud and boastful I was,” he says. “Oh, proud I was of my faith in the Master.”

In an early scene there is a discussion among a few men of Lazarus and him being raised from the dead. One man plainly declares he believes the Almighty performed the miracle through the Galilean, Jesus. There is a bit of creative license in the film as the filmmakers imagined how a few conversations might have gone, but it is all based on scriptural events. This includes Judas Iscariot working it out for Jesus to be captured, and a comment is made about Jesus showing his power to the Romans, which would appeal to Peter’s vanity.

Peter shares the story of Jesus calling Lazarus from the tomb, and humorously suggests he was the first one to detect movement in the tomb! In another scene Peter visits an armor shop and purchases a sword. This is set up to explain why he has one and cuts off the ear shortly afterwards of the man who attempts to arrest Jesus in Gethsemene. Peter explains to a Roman guard who wanders in that he has to travel and there have been crimes on the road. The guard tells the shop owner it’s all right, “As long as he’s not a bandit himself.”

Peter and John speak soon after this event and Peter tells John he will defend the master if needs be. They also speak of Jesus’ triumphant entry into Jerusalem, astride the donkey, and the chants of “Hosanna! Hosanna!” from the people.

The religious leaders are already plotting to take Jesus into custody, and this includes giving 30 pieces of silver to Judas Iscariot for his betrayal. One of the powerful scenes of the film includes Jesus at the Last Supper, giving unleavened bread to his followers, saying, “Take, eat, this is my body broken for you. Do this in remembrance of me.” He next gives them wine and says, “Drink of it, all of you, for this is my blood of the new covenant which is poured out for man for the forgiveness of sins.” He says one of them will betray him, and looks at Judas and says, “What you’re going to do, do quickly.”

All of these scenes lead up to Jesus being arrested, but it is a non-bloody and pretty tame scene which shows Peter using his sword on the guard. We don’t see the ear being cut off. Jesus restores the man and soon afterwards Jesus’ prediction of Peter denying him thrice before the rooster crows comes to pass.

It should be noted that the costumes and sets are all well done and realistic-looking in the film. And the acting, particularly that of Richard Kiley as Peter, is all spot on. The writing of Henry Denker and the direction of Harold D. Schuster is nicely executed. They stay close to the heart of the gospels.

Jesus tells the Jewish religious council “I am” when they wonder if he is the Christ, the messiah. They turn him over to Pilate to be judged and put to death. The scene of Jesus’ crucifixion is simply portrayed with the women at the foot of the cross, weeping, and looking up at Jesus, who is not seen. We hear him say, “It is finished.  Father, into thy hands I commend my spirit.” Next Jesus is placed in a tomb, and the Romans seal the tomb and place a guard at it.

The film concludes with Jesus’s resurrection, and him telling the disciples to wait until they are empowered by the Holy Spirit. Once they are, Peter preaches a powerful sermon to the Jewish leaders, declaring boldly that they put Jesus to death, who is alive, and that they need to repent. The final scene features Peter going off to be put to death by the Romans.

This is a powerful film, including the scene when Jesus appears to the disciples and tells Thomas to see his wounds and to thrust his hand and fingers into the wound and to not be faithless but believing.

This movie has merited our Dove seal for All Ages.

This film is a faithful telling of the last days of Jesus, leading up to His death and resurrection, and every family member will be caught up in its inspiring story.

Strong re-enactments of scriptural events; the resurrection of Jesus and the coming of the Holy Spirit are emphasized.

A few imagined conversations during the telling of the story; persecution of Jesus and His followers.

Mild violence with Peter non-graphically cutting off a guard’s ear and Jesus restores it; Jesus speaks from the cross but is not seen.

Just the sharing of wine at the Last Supper.

A few imagined conversations during the telling of the story; persecution of Jesus and His followers.