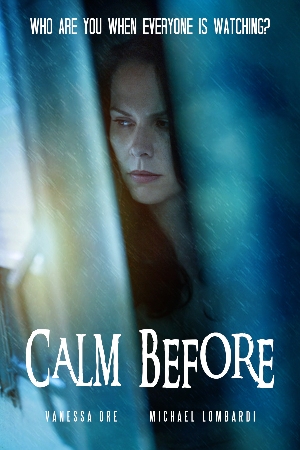 A husband and wife on the brink of divorce are trapped at a Lake House on their anniversary and are forced to confront their demons, both real and imaginary.

This movie comes across as a combination of melodrama, horror, a paranormal tale, and a TV soap opera. A couple, named Shane and Gia, are celebrating their anniversary, and they reflect a lot on their past marriage, which is shown in various flashback scenes. It has had its share of ups and downs, and has had more recent down moments than the up times. It seems like in every few scenes Shane loses his temper with Gia, only to say, “I’m sorry. I’m sorry.”

Gia has been in therapy, and as the story unfolds we learn that she had a verbally abusive mother, and her father had left home when she was a young girl. Also, she and a man named Isaac, Shane’s friend, are drawn to one another despite her marriage to Shane. She and Shane travel to an isolated beautiful house next to a large body of water, and the landlord, Helen, tells them the house is haunted. Her son, Jedediah—who wants to be called “Jedi”, insists there have been paranormal activities in the house. He is an expert he claims and even has a webcast. He claims he has communicated with the dead. To add to all this drama, Isaac shows up and it is obvious he wants to pursue a relationship with the married Gia.

Gia accuses Shane of having had an affair, stating there were times when he was at work that she couldn’t track him down. He says he had gone out to dinner a few times with a lady co-worker, but only to discuss business. Gia is withdrawn on this anniversary excursion, and she seldom opens up with Shane, who is much more affectionate than her. She wants to have a baby but hasn’t been able to thus far and she doesn’t like Shane’s suggestion that they think of adoption. And a man’s complaints that being faithful to a marriage partner over time isn’t realistic is of no help to the couple.

Soon the idea of perhaps Gia being the one to have had an affair with Isaac becomes a possibility. How much of what is in Gia’s mind has really happened and how much is just in her head? To be honest, this movie is a pretty depressing film to watch.

As far as content, the film contains many, many drinking scenes, of mostly wine in glasses, with drinks taken from a  bottle of alcohol too. There are also smoking scenes, scenes of the talk of the paranormal, and communicating with the dead, not to mention several uses of language including the Lord’s name taken in vain. In addition, adultery is a theme of the movie too. For these reasons we are unable to award our Dove seal to the film.

The content in this movie is much too much for us to consider it a family-friendly film.

Constant tension between a couple; a woman remembers her mother as being verbally abusive; a woman vomits; tattoos on a man’s arm; a man speaks of the paranormal and of the unrealistic expectations of marriage; a woman sees another woman who isn’t really there.

Adultery; kissing between a couple; a few scenes of couples lying on bed, kissing.

A man punches another man, and the other man shoves him; a man grabs a woman by the arm.

Cleavage in a few scenes; a woman’s bare shoulders are seen in a shower scene; part of a man’s chest seen as he lies in bed.

Constant tension between a couple; a woman remembers her mother as being verbally abusive; a woman vomits; tattoos on a man’s arm; a man speaks of the paranormal and of the unrealistic expectations of marriage; a woman sees another woman who isn’t really there.