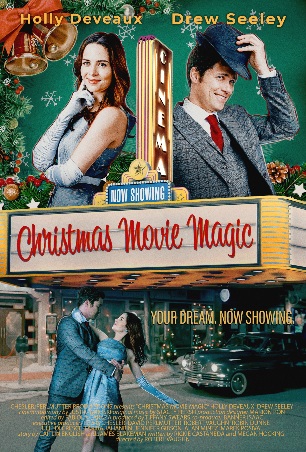 A reporter teams up with a local theater owner to uncover the romantic mystery behind a classic Christmas film and its signature song, and along the way find their own love story that rivals the movies.

One of this reviewer’s favorite movies!  You will love the well-written script and attention-grabbing storyline, the beautiful sets, the casting, and the onscreen chemistry between Alli (Holly Deveaux) and Brad (Drew Seeley) as they work together to make awesome movie magic that can take you wherever you want to go.  Jill Frappier, who plays Brad’s grandmother, Margaret, is magnificent in her portrayal of a loving companion who gave her heart to two very special gentlemen.  The magic of movies will reach into your own heart as you and your family watch this unforgettable movie that’s Dove approved for all ages.

Alli’s pitch to her boss, Dennis (Roy Lewis), does not go over well.  She begs to be a news writer and he agrees to consider transferring her to the News Department,  but only if she can cover an important story and make it sensational.  The story – this year is the 65th anniversary of the release of the movie classic, “Christmas With You” that was filmed in White Falls, NY, premiered at a local theatre and she needs to go there and  cover it.  However, Christmas is not of much interest to Alli but her move to the News Team rides on the incredible story she needs to write.

Arriving in White Falls, the signage is going up on the local Westdale Theatre, showcasing the 65th anniversary and the exhibit of the newly restored film.  Brad is a 3rd generation admirer of the classics and believes “Christmas With You” can provide common ground to people from all walks of life and all ages. Brad is all about the charm and magic of movies and the excitement that Christmas can bring.  Alli is all about a good story with no interest in being converted.

The famous movie star of the time, Walter Andrews, wrote the lead song, “Christmas With You” and when Alli and Brad accidentally find a love note to someone called “D”, handwritten by Walter on the back of the original music sheet, it confirms Walter wrote the song for someone special and the search is on.  Alli sees a story forming that has the makings of a super article, exactly what Dennis is looking for.  But Walter is a recluse and refuses to speak to anyone connected with the press.  Alli will have to find another way.

A very big tip…wet cement…Walter wrote her name somewhere in wet cement 65 years ago!  When Alli and Brad find the name, Daisy, the search intensifies for the mystery woman in Walter’s life that inspired the movie’s signature song and the town legacy.

But there is an unbelievable twist when Alli discovers the truth about the gifting of the Westdale Theatre, and an even darker side that is bound to cause hurt, disbelief, and broken hearts.  Dennis is ecstatic and assures her she has made the News Team, but she agonizes….at what cost?  As Alli struggles with the trauma the scandal will bring, Dennis threatens her in that he will find another reporter to take over if she doesn’t deliver.  Everyone loves a good scandalous Hollywood love story!  Facts before feelings.

As Alli searches for a way to fulfill her boss’s request without upsetting the townspeople and destroying trust, Daisy herself provides the perfect ending to a story she is happy to tell.

Magic is where you make it, and movie magic can take you anywhere, if you just sit back and let it happen.  A welcome escape from reality, bringing dreams to life, renewing a sense of wonder, and restoring faith in humankind.

Everyone in the small town looks after each other; Brad is loyal and his motives are honorable and for the greater good; Alli does not compromise her moral standards even though she may lose her dream job

Wine with friends at home; champagne at the Christmas tree lighting event; no abuse of alcohol or bad behavior