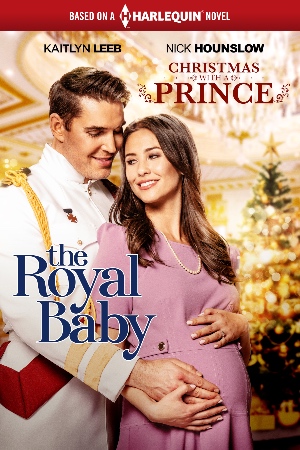 Christmas with a Prince: The Royal Baby

Things get complicated for the expectant Prince Alexander and Princess Dr. Tasha when a Royal State Visit is planned abroad, passing through her hometown. A slight scare delays their return, and the couple must struggle with defying tradition and delivering, literally, on expectations.

Based on the Harlequin Novel, “St. Piran’s: Prince on the Children’s Ward” by Sarah Morgan, a Sunday Times and USA Today bestselling author of romantic women’s fiction and with 21 million copies of her many books sold, in 28 languages, you are sure to enjoy this movie screenplay by Celina Dean and Josh Dean.  Only books that appeal to a wide demographic in specific genres are chosen to become movies.  Sit back, enjoy the orchestral music fit for royalty that abounds throughout, and the devotion to family and duty as portrayed by a very-much-in-love royal couple.  This Dove-approved movie for all ages will entertain you and your family on a special movie night at home.

Following Christmas With a Prince and Christmas with a Prince: Becoming Royal with Kaitlyn Leeb as Princess Tasha and Nick Hounslow as Prince Alexander,  the viewer is transported for 90 minutes into the fascinating world of the life as a royal, but with a delightful smattering of unlikely unroyal scenarios as the Prince and Princess expecting their first child, are pressured “it must be a boy” to preserve the tradition of male heirs to the throne.

When Princess Tasha (Kaitlyn Leeb) of San Savarre announces to her brother, pediatric physician Dr. Jeff (Josh Dean), that she and Prince Alexander (Nick Hounslow) will be at the opening of the new pediatric wing of his hospital in the United States, everyone is ecstatic!  Tasha is strongly advised not to travel at this crucial time in her pregnancy, but she insists.  Their personal attendant, Blevins (Tom Morton) is determined this event will end quickly and get the pregnant Princess back to San Savarre to protect the royal baby’s citizenship and eligibility as successor to the throne. When Tasha experiences pains on the way to the airport, she is rushed back to the hospital and put on bed rest for an indeterminate length of time, much to Blevin’s irritation. King Edward (Charles Shaughnessy) is demanding that the baby be born in San Savarre and Prince Alexander better figure out a way to get Tasha home!  It takes an elaborate scheme involving both the US and San Savarre governments to find a solution.

Although royal duties must prevail, Tasha is remorseful that she hasn’t been able to practice as a medical doctor.  But then as thoughts of creating her own workplace begin to unfold, with San Savarre citizens benefitting, King Edward has a change of heart, admits new traditions can be created … which includes who becomes an heir to the throne!

The actors are superb and the script is light and pleasant telling a story of the perils of being responsible for the birth of a future heir to the throne … who has always been a boy, but what if the royal baby is actually “royal babies”? A twist in the movie may change that tradition!

Becoming a parent changes one’s life, and being royal brings on the same responsibilities of caring for offspring … but perhaps with a little more help! Enjoy every precious moment with your babies … time passes quickly.

The King’s subjects display unfaltering loyalty to him and to their country; the Prince is attentive and caring; Blevins is loyal and the epitome of integrity and proper behavior