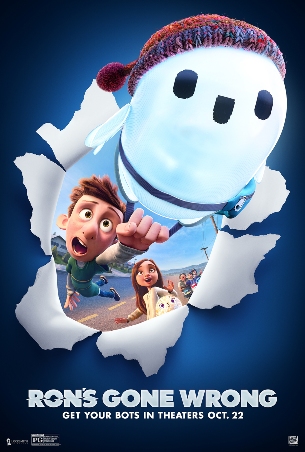 The story of Barney, an awkward middle-schooler and Ron, his new walking, talking, digitally-connected device. Ron's malfunctions set against the backdrop of the social media age launch them on a journey to learn about true friendship.

Sometimes the most perfect friends are the most imperfect ones. And in a world where people try to project the most perfect lives on Facebook — even when those lives don’t really exist — perhaps that message isn’t more needed than it is now.

Ron’s Gone Wrong is an animated tale that gives awkward and lonely middle schooler Barney Pudowski the platform to broadcast just such a message. It’s not done in a preachy way, mind you, but in a cute format to which kids are likely to relate.

Everybody at Barney’s school has a B*Bot, a kind of perfect robo-friend that digests its owner’s social media profiles and picks out perfect other friends. Everybody’s got one, that is, except Barney.

Barney’s birthday doesn’t look like it’s going to be a happy occasion, either. He’s got borthday-party invitations to give out, but doesn’t — because he’d rather avoid the embarrassment of nobody showing up. Perhaps his only consolation is that Barney expects to get a B*Bot for his birthday, but Dad and Donka — his widower father and his Bulgarian grandma — completely misread the room and get him a rock-excavation kit and a hand-knitted cap. Ouch!

By the time they figure out how far wrong they went, it’s too late to get one at the Bubble store. They’re sold out. Poor Barney!

But Donka has ways of getting around that, involving her saved-up funeral money and a certain back alley, and they procure a slightly dented B*Bot that fell off a delivery truck. But even though it’s dented and imperfect, it’s absolutely perfect for Barney, who names his R2D2-like friend “Ron.”

Part of Ron’s imperfection is that the safety programs that keep B*Bots from going rogue never got downloaded. It’s like having a friend with no filter. So when bullies pick on Barney, Ron has no program to keep him from exacting a little violent vengeance.

That’s good for Barney, but bad for Bubble. When others learn that Ron has short-circuited the safety programs, they want to copy. Soon, everybody’s B8Bot is going rogue, and Bubble wants to recall Ron to destroy him and keep the rogue bot from giving the company a bad name. Hilarity and high jinks ensue.

Things that might cause a little pause are the poop humor — even one girl is derisively referred to as “Poop Girl.” The language is mild, but overall the message seems to be more about friendship being a two-way street, and there’s no way to avoid the imperfections that come with it. As such, it merits our Dove-approved seal for All Ages.

Friendship is a two-way street, and true friends aren’t looking to avoid the imperfections that come with it, but to love despite them.

Building friendships in the age of social media can be tough, as Barney shows, but this movie makes it clear that friendship is a two-way street and that friends must listen to each other and care about the other's needs.

H-ll is referred to twice. OMG, freakin'. Several toilet humor references, including a girl, who proclaims after a gaggle of B*Bots "swallows" her: “It pooped me!” Another reference to "dumb robot." Still another reference to hind ends: "I can see his ro-butt!"