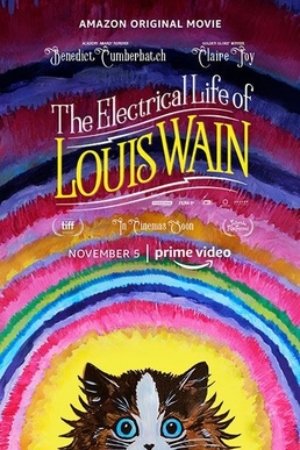 The Electrical Life of Louis Wain

Louis Wain was many things during his incredible life: artist, inventor, entrepreneur and caretaker. After adopting a stray kitten, he went on to paint the extraordinary images of cats that made him world famous.

Cats: the animal, the pet and the word defined culture in the 2010’s, in movies, GIFS and YouTube videos, and in our own homes and apartments. The growing number of felines in families, the growing number of felines in commercials: it’s all become such an intrinsic part of life that it’s important to remember the discovery came from a man living in England at the turn of the turn of the 19th century, a painter and inventor who made cats a part of everyday life.

Louis Wain was the first person to see cats as more than strays, and the first person since the Egyptians to put them in art. His life’s work is the subject of Will Sharpe’s feature debut, The Electrical Life of Louis Wain, adapted by Simon Stephenson from a number of articles written about Wain over the course of his career. Benedict Cumberbatch stars as the pioneering artist who painted cats, but also dealt with mental illness and severe loss.

The contradiction marks Sharpe’s film, which chronicles both the highs and lows of Wain’s life: the art that made him famous, but also the trauma that made him crazy. The film opens with his life at home, where he shares a house with five sisters, two nieces and a governess. Along with his mother, Wain has all sorts of chaos going on in his life, not least of which is drawing animals for the London Illustrated News.

He’s got a loose screw that enables him to finish these drawings in seconds, leading him to eventually take a gig drawing cats. But it also leads to a sad, devastating mental breakdown, with embellishments of magical realism sewn throughout, as Wain’s delusions get worse and his flights of fancy turn into fantastical works of art.

Cumberbatch carries the story beautifully as the titular character, in a role that allows him to demonstrate his comedic chops while also playing the most serious man in the room. He has a subtle comedic style, at once bemused, belittled, but also polite, which makes him a likable and human protagonist.

Cumberbatch faces off with a host of other talented actors playing the characters who orbit Wain’s life, from his wife Emily (Claire Foy) and sister Caroline (Andrea Riseborough) , to Toby Jones, who just about the steals the show as Wain’s editor William Ingram, with whom a young Wain lodges after the death of his sister.

It’s not just the actors who bring electricity. Sharpe’s style is also electric, offering up a purrfectly pleasant, occasionally brilliant plunge into our hero’s mind. Throughout his life, Wain has delusions and sees cats as people. He learns how to channel those delusions into paintings, finding the beauty in the world as he sees it, in the grass, the trees, the animals. Using broad strokes, wide eyes and explosions of expressionistic color, Sharpe also finds the beauty in Wain’s world, offering audiences a quirky tribute to a quirky man who made art, cats and memes just a little better. Give this film two hours of your time, and it will likely do the same.

If your kids are over the age of 14, they will likely find this biopic a lot of fun. Younger ones may be scared or put-off by the more serious sections.

Wain has faith in what he is doing (drawing cats, marrying someone not his class), even when society tells him he is wrong.

Kissing on a bed. Kissing in a bathroom.

Wine and cigarettes. Wain's illusions are similar to LSD trips, though he never takes drugs.

Mental illness is portrayed throughout. Younger kids may be scared by cats on the heads of people, etc...