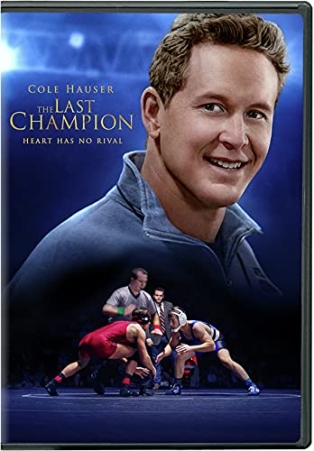 John Wright was a hometown hero — the powerful star of his high school wrestling team and a promising Olympian. He could have had it all ... but one bad decision destroyed his dreams and forced him to leave under a cloud of scandal that has haunted him ever since.

Twenty years later, John returns to his small town after his mother’s death, hoping to save his family home from foreclosure. His icy reception proves that his former friends and neighbors still haven’t forgiven him for letting them down. Unexpectedly, John gets the opportunity to turn everything around — by coaching his high school’s wrestling team. There he meets Michael, a talented underdog with a troubled homelife who faces a vicious opponent out to destroy him both on and off the mat. Can John become the leader the team and Michael needs, or will he lose himself to the dark demons of his past?

The Last Champion is an inspirational family sports drama that will have you believing in second chances. Beautifully photographed in the Pacific Northwest, it’s a story about faith, loss and redemption starring Cole Hauser (Yellowstone), Hallie Todd (Lizzie McGuire), Randall Batinkoff (X-Men: First Class) and Peter Onorati (This is Us). The film is directed, produced and co-written by actor Glenn Withrow (The Outsiders).

Based on a true story, this inspiring story about Olympic wrestler John Wright is well worth the viewing time. The film is about his meteoric rise to the top of his profession, and then his fall from grace due to the use of enhancement-performing drugs. His gold medal was stripped away from him. And when he returns home following the death of his mother, he must deal with a “cold shoulder” from many of the town residents.

Starring Cole Hauser in the role of John Wright, Hauser plays a clever balance of grace under pressure while still showing he has some fire left in the furnace. Directed flawlessly by Glenn Withrow, other strong performances are given by Annika Marks as Wright’s love interest, Elizabeth Barnes, Peter Onorati as Wright’s former wrestling coach, Frank Stevens, and Sean H. Scully as up-and-coming wrestler Michael Miller. And, also quite good in the role of the villain of the movie is Randall Batinkoff as local banker Bobby Baker, who attempts to manipulate Wright to get his son, who attends the local high school, to the State Finals.

In an early scene in the film Wright visits the local diner and the waitress, Peggy, remembers he likes vanilla milkshakes. She asks a customer who is about to leave if he would like a piece of pie. “No pie tonight, Pete?” Pete looks at Wright and replies, “I’ve lost my appetite.”

Wright learns through banker Bobby Baker that his mother was far behind in payments on her house, and he is unwilling to work with Wright. That is, until Baker finds an angle. After revered coach Frank Stevens dies suddenly from an apparent heart attack, Wright becomes the high school wrestling coach. Baker fronts Wright $75,000 to help make sure Baker’s son, Scott, makes it to the State Finals and promises another $75,000 if that happens. However, Wright isn’t comfortable with the situation as Baker doesn’t care what Wright has to do to make sure that Scott comes out on top. And when Wright witnesses Scott and some others from the wrestling team beat up Michael Miller, Scott’s biggest rival on the wrestling team, he can’t live with himself any longer. He turns to drinking-at first. But then a visit with Pastor Barnes (Bob McCracken) and a prayer at church helps him realize what he must do.

Supported by strong music by composer Kazimir Boyle, and a good script, the movie captures several key moments and the human emotions in a powerful way. For example, the sparks are seen between Elizabeth Barnes and Wright, but he holds back until he talks with the pastor and makes peace with himself. He gives the $75,000 back to Baker, and begins to work with Michael Miller, who has a difficult home life. Wright sees the potential for Miller to go far as a wrestler. And this might just be a way for him to redeem himself from scandal if he can coach Miller to the finals. And Miller wins his teammates over, who apologize to him for the beating.

The film does an excellent job in demonstrating the consequences of decisions and the powerful ally of God’s forgiveness. It also features words of wisdom such as when Coach Frank Stevens tells Wright, “Don’t travel backwards,” referring to his mistakes of the past. He encourages him to move forward.

Included in the film is a character of a not-so-great mother, who doesn’t support her kids, and won’t attend Michael’s wrestling events. And she smokes a lot. Yet there are wonderful scenes including a Christmas play by the kids recreating the Nativity scene and singing, Away in a Manger. And the scene in the church when several people step up to help the kids is a touching scene and a memorable moment.

We won’t plot-spoil the ending, but we will say that Coach Wright coaches Miller to the State Finals and Miller’s opponent winds up being — who else? — Scott Baker. You will have to watch the movie to see who wins but it features an exciting finish. This a powerful and gripping drama, with inspiring moments. It has deservedly captured our Dove seal for Ages 12+.

This film has earned good “word-of-mouth” praise, and deservedly so, and it is a winner all the way.

Praying and a Nativity scene with baby Jesus, with the song Away in a Manger; a local pastor is seen as a good and caring character.

A man who coached a wrestler continues to help him, even after he has been touched by scandal; local residents help some kids who have an unfit mother; a pastor encourages a man; people show forgiveness to a man who faced public embarrassment for cheating by using enhancement drugs.

A couple kisses a few times.

A teen boy is beaten by several other teenagers, and he winds up with a bloody nose, but he is okay; some roughhousing in a few of the wrestling matches.

A woman smokes a lot, and a man is seen smoking; a few scenes of drinking, including beer and strong alcohol, and a character becomes inebriated.

A man schemes to give his son an unfair advantage in wrestling; a few people are judgmental toward a character, but some forgive him; a mom is not a good mother to her children and doesn’t support them as she should.