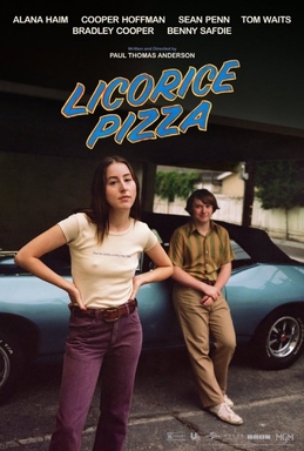 A love letter to 1970s San Fernando Valley in California, Licorice Pizza follows a 15-year-old boy and 25-year-old woman who end up falling in love.

It’s not shocking to say that Licorice Pizza is Paul Thomas Anderson’s funniest and most euphoric film yet. This is the man who gave us There Will Be Blood.  And yet Licorice Pizza is a blissful hangout you don’t so much watch as breathe, inhale and soak up like sun. The film is closer to Almost Famous than Blood, a golden haze of nostalgia that floats off the screen, and overwhelms you with a sense of discovery and childlike innocence.

Licorice Pizza is still very much an Anderson film, chockablock with his obsessions and aesthetics. His fetishes and fixations are front-and-center, from the production design (shaggy carpets, wooden panels) to the music (David Bowie, The Doors). Anderson’s camera lingers on every detail in the frame, whole swaths of San Fernando Valley recreated to mirror 1973 Los Angeles. He wants to recreate the vibe, the smell, the place.

The 133-minute film has a lively feel because Anderson is more interested in crafting an experience than a movie — he’s more interested in “kickin’ it” than telling a story. We are in Los Angeles, after all, where it’s cool to hangout, where kickin’ it is all people do.

Early in the film, one of our protagonists, Gary (Cooper Hoffman), a child actor known for his role in sitcoms, walks up to a girl at school. He’s a smooth-talker, the kind who clearly steals his moves from Burt Reynolds. But she’s ten years his senior, a photographer on campus who isn’t impressed with his acting credentials: “What are you? A 15-year-old Dean Martin or something?” But, against her better judgment, Alana (Alana Haim) agrees to kick it at a restaurant near his house.

The next day, Gary is invited to a sitcom reunion of Under One Roof, and Alana ends up going as his chaperone. Begrudgingly, she starts to fall for Gary as the two bond over dinners, as well as Gary’s entrepreneurial endeavors, from selling water beds–which yields a hilarious, coked-out interlude with Jon Peters (Bradley Cooper)–to the opening of a pinball palace. There are all sorts of detours on the road to love, including a Hollywood relic (Sean Penn) who takes a liking to Alana, a bike jump over a ring of fire, a smashed Ferrari and a Hollywood party.

This is Anderson’s most tender and joyful film yet, steeped as it is in the memory of childhood: the first kiss, the first breakthrough, the days spent running around with friends, the nights spent running around with people you don’t even know. It’s also his most conservative film. Coasting on homages to hangout cinema (Shampoo, Almost Famous, American Graffiti, Dazed and Confused), Anderson drives around the Valley with his windows down and his volume up, looking for adventure in a host of familiar places.

If you can sit back and enjoy the ride,  you’ll find yourself grinning from ear to ear as Gary and Alana cruise through town, pretending to be grown ups when really, they are still kids. Though Anderson isn’t known for good vibes, he has no shortage of them here, taking us back to a time and place where the streets were alive, the leaves were brown and the skies were anything but grey.

This movie has no shortage of drugs, cursing and sexual content. That being said, it’s also one of the best films of the year, a must-see for anyone over the age of 18 who fancies themselves a movie buff.

Jews are brought up often.

A woman says, "Can I show you my boobs?" Her back is turned to the camera for five seconds.