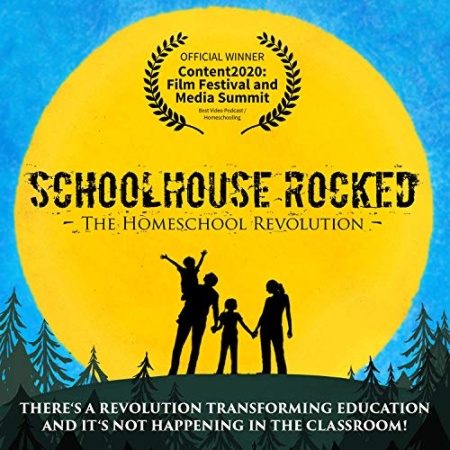 Schoolhouse Rocked follows Yvette Hampton and her family as they travel the country, interviewing education experts, curriculum developers, college and university faculty and administrators, and homeschooling families at every stage in the process, from kindergarten to college graduation and beyond. Viewers follow Yvette’s progression from strong opponent to homeschooling, to reluctant homeschooler and first-time teacher, to outspoken advocate for this growing education revolution.  Along the way, viewers share in her challenges and victories, and gather the necessary resources and encouragement to homeschool with excellence.

It’s nice to see a documentary like this one come along, one that is inspirational and unashamedly Christian, showing firsthand the benefits of homeschooling for those who dare to do it. What is truly amazing is the number of parents who never dreamed of homeschooling and then, for various reasons, decided to and the satisfaction they have garnered from it.

Directed by Garritt Hampton and produced by his wife, Yvette, this documentary chronicles how the Hamptons sold their home some years ago, bought a motorhome, and set out to see various parts of the world while homeschooling their daughters, Brooklyn and Lacey. They consequently came across many other homeschooling parents, and they shared various experiences and learned from one another. They also learned of resources that were available that they previously never were aware of.

Various scriptures are used throughout the film, and the film starts out with Proverbs 1:8-9 (ESV) which says, “Hear, my son, your father’s instruction, and forsake not your mother’s teaching, for they are a graceful garland for your head and pendants for your neck.”

“We weren’t trained as teachers,” says Yvette, and she and Garritt were concerned that the kids would not be well educated. She also felt, “It’s not my job,” but then various factors changed their minds. The Hamptons left in their motorhome on December 15, 2016, and they finished filming their last documentary interview in 2019. We see them travel in Texas as well as in Georgia, with all sorts of weather marking the various travel days.

The documentary examines their learning experiences as it plainly shows the liberal teaching that has infiltrated the schools, including that of various sexual genders, and orientations, and the lack of absolutes when it comes to right and wrong. Shockingly, it is revealed that the idea of abortion being acceptable is brought into the school curriculum in various schools!

Various people are interviewed in this film, including Heidi St. John, a homeschool author and teacher. She did not start out desiring to be a homeschool teacher. In fact, she says she knew some parents who were homeschooling and thought they were crazy! Various memorable comments are offered in the documentary including this one: “What woman would want to be locked up with her kids all day when a school bus would come along and take them away, right?”

Yet many families wound up doing so, either by accident, or having their minds changed when they tired of the many problems public schools were causing. Several families didn’t plan to homeschool but those who did trumpet the many benefits of having done so. Some public-school problems are examined, including that of school shootings such as took place at the Saugus High School. Along with gender identities and various other teachings, many parents chose to turn to homeschooling.

Another reason many parents changed to homeschooling is due to the quality, or lack of, they were finding at public schools. Sam Sorbo mentions that for some students, a teacher stationed at a blackboard can be stifling in their educational growth. And, as one adult comments, “Real life started when school ended,” speaking of the public school system. And the “Titanic institutional education” is mentioned, referring to a sinking system, at least in some places of public learning.

Prayer was offered up for more homeschool resources in Vancouver, Washington, and they became available. The massive shift in the culture is cited by various parents as to why they chose to leave the public school system. They saw traditional values being destroyed. As one parent says, “The barn is on fire! At what point do you say that enough is enough is enough?” And a survey is cited in which some millennials say they are not born again, despite going to church, and that good people go to heaven, overlooking the need for redemption through Christ. The opposing views of God and man are examined.

There are those who consider themselves missionaries, remaining in the system to teach despite the atheistic views. And the goal of parents wanting their children to become wise and virtuous is mentioned. Parents who decide to take the plunge are encouraged by Ginger Hubbard, who says, “If I can homeschool, you can homeschool!”

There are various supportive groups that are spoken of in the documentary. The view that, “Yes, I will shelter my child” and the parents’ authority in educating their children is a common thread throughout the film. Proverbs 9:10 (ESV) is quoted: “The fear of the Lord is the beginning of wisdom, and the knowledge of the Holy One is insight.” There will be opposition says those who have homeschooled, but a woman named Nanette Brown says, “Read to your kids, and give them Jesus and you’ll be all right.” Parents say their homeschooled children are thriving, and living efficient lives. The documentary also examines homeschooling children with disabilities.

Powerfully, there is archived footage of Hitler, the Nazis, and Stalin shown, with the comment that these regimes made a point of taking the freedom of children away. This is a powerful documentary, and has earned our Dove seal for All Ages, although it is not intended for really young kids.

This documentary is inspirational and shows the power and difference parents can make in their own kids’ lives if they choose to homeschool them.