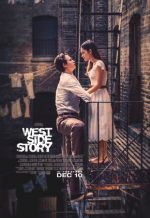 An adaptation of the 1957 musical, West Side Story explores forbidden love and the rivalry between the Jets and the Sharks, two teenage street gangs of different ethnic backgrounds.

Reimagined and then released exactly 60 years after the Oscar-winning original, Steven Spielberg’s adaptation of West Side Story remains largely faithful to the 1961 version, which in turn brought a 1957 Broadway play to the big screen.

The music and dance numbers retain much of their original feel in the aftermath of lyricist Stephen Sondheim’s recent passing as Spielberg directs his first musical, and there remains the can’t-miss Romeo-and-Juliet undertones that form the skeleton of the conflict between the Irish-heritage Jets and the Puerto Rican-heritage Sharks.

It’s cast more realistically, with the old brownface makeup set aside in favor of actual Latino actors playing members of the Sharks, led by Bernardo (David Alvarez), who even speak Spanish (without English subtitles, a seemingly subtle way of playing up the tensions between them and the Jets). It’s so faithful to the original, it even still has Rita Moreno, though age obviously prevents her from reprising her role as Maria’s fiery scene-stealing friend, Anita (played now by Ariana DeBose). Now, she’s Valentina  — a new character and widow of the original’s shopkeeper Doc, a voice of reason as the Jets and the Sharks fight over crumbling New York turf.

That said, there are, of course, other differences. Spielberg’s adaptation feels a bit grittier and a tomboy from the original is a transsexual male, played by an actor who identifies as non-binary in the 21st-century reimagining.

Unfortunately, the language also is a bit saltier and the violence more brutal, which precludes Dove approval. There’s an F-bomb and a few S-bombs in there now. Is that an argument against remaking a classic or is it a revelation that, with those updates slipped in so casually, maybe the original was built on a foundation that wasn’t as innocent as we’d all like to believe? The anti-Puerto Rican racist vibe in the original — echoed by characters like Jets leader Riff and police officer Krupke — was so palpable, Moreno recently revealed it made her feel “horrible” and she nearly quit over it.

But for those who loved the original, there will be much to love about Spielberg’s take, including Ansel Elgort’s performance as Tony.

It’s romance set against the backdrop of gang warfare — what Romeo and Juliet might look like set to music of 1950s New York, with splashy colors and dance — and it comes with all the warts thereof.

Faith: Passing references to it. Anita attends Mass, though it seems her mind is (ahem!) somewhere else. Tony and Maria have a kind of unofficial wedding they conduct themselves in a churchlike setting.
Integrity: Anita tries to aid Tony and Maria's relationship, even at personal risk of others' alienation.
Sex: Tony and Maria kiss a lot, unofficially marry in a museum with churchy things, like an altar, where they kneel. Later, they sleep together. Bernardo and Anita live together, kiss a lot and (implied) do more than that.
Language: Several GDs and misusings of Jesus’ name. One F-bomb, four S-bombs. Additionally, "a–,” “b-st-rd,” “cr-p,” “d–ck,” and “h-ll.” Racial and ethnic slurs.
Violence: Abundant. Jets and Sharks rumble in salt facility. Woman nearly raped in store. Knife fight. Gun fight. Tony beats a Jet half to death. There's a nail in the ear. Police are attacked.
Drugs: Lots of cigarettes and alcohol. Reference to marijuana.
Nudity: Lots of cleavage and leg showing. Bare-chested men.
Other: