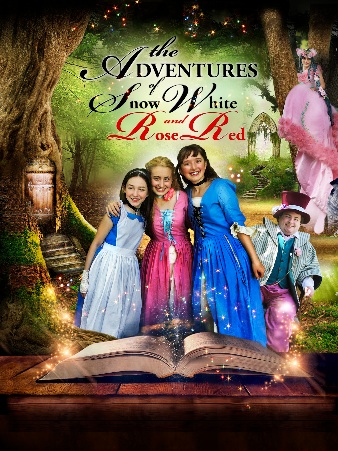 The Adventures of Snow White and Rose Red

This live action fairy tale features two sisters, Snow White, a kind girl with a passion for animals and good books, and her sister, Rose Red, an outgoing girl with a curious spirit. One day while roaming the forest near their cottage, they learn that the woods are magical and they begin to cross paths with the characters they've only read about in fairy tales, such as Cinderella, Little Red Riding Hood and Alice in Wonderland. As they embark on their adventures, the girls learn the importance of sisterhood, friendship, and kindness, and that your life can be far from ordinary, if you just believe in a little magic.
3
Negative Rating
12345
SexLanguageViolenceDrugsNudityOther
4
Positive Rating
12345
FaithIntegrity

In this entertaining and imaginative movie, Snow White and her sister, Rose Red, cross paths with other famous fairy tale legends. The kids will enjoy this one a lot, and especially young girls. The film features giggling young girls who enjoy various adventures in these fantastical worlds of the imagination.

Starring Demetra Zorbas as Snow White, and her sister, Callista Zorbas, as her movie sister Rose Red, the girls cross paths with the most amazing characters. The legends they encounter include the Queen of Fairies, Alice in Wonderland, Rapunzel, Little Red Riding Hood, and Cinderella.

They are aided with help along the way, including Prince Ferdinand and others. The fairy magic includes Snow White and Rose Red placing lumps of coal in the fireplace at night, only to see they have turned into a flower wreath of white and another one in red the following morning. The girls quickly adorn the flower wreaths on their heads. The sisters love reading about magic but enjoy it happening in their lives.

There are nice themes shared in the movie, such as magical things can happen if you only believe, as well as the impossible can become possible. And the importance of sharing with others is another one. The music is fitting, at times whimsical and at other times bold and dramatic. The costumes are appropriate, with the girls wearing long dresses and gowns. They are often seen in the green of the woods.

When the girls meet Alice, they learn of her search for a white rabbit and Snow White and Rose Red promise to help her in her quest. But first, they enjoy a nice picnic together. They are concerned about encountering the dreaded Jabberwocky, but he turns out not to be such a threat. The girls also have an unexpected meeting with an arrogant queen, who insults them. The girls confront her about her attitude, and she apologizes. She is told her apology is accepted, but to try not to be so cross all of the time.

Later Snow White and Rose Red’s father sends them to search for blueberries so they can bake a blueberry pie. As they scavenge for the berries they come across Rapunzel, who has been placed in a tree by a wizard. We learn he placed her in the tree because she stole his ring. She explains she is poor and took the ring to sell for food. The wizard is bald, and the girls come up with a suitable compromise. Rapunzel will give him some of her long hair for a wig if he will, in turn, give her his ring to sell. It’s truly a funny scene later on when we see the bald wizard with long hair, seated along with Rapunzel at Snow White’s and Rose Red’s dinner table, along with the prince and their mother and father.

Later they help Little Red Riding Hood when they discover that her grandmother is missing, and a wolf is in the cottage home. Snow White and Rose Red help settle a dispute when they find that the Fairy Queen is locked in a box by her brother. He has the golden key that can open the box and set her free. But he wants the key. The girls come up with a solution that will bring peace to the enchanted forest and the kingdom.

This one easily earns our Dove seal for All Ages, and it incorporates timeless and important themes.

This movie is a fun and entertaining watch, combining many of the most famous fairy tales in one movie, and is a wholesome viewing experience for the entire family.

Characters help one another, such as the girls helping Rapunzel who is trapped in a tree, and they help a queen who is locked in a box; they show an arrogant queen that she should not be insulting to others, and they help a brother and sister to make peace with one another.

A fairy queen is locked away in a box.

Various characters must overcome difficulties including a few spells.