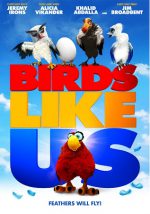 The story follows a group of birds on a journey where they try to find a better life for themselves and the ones they love.

In exchange for the safety of a city inside the cavity of a large tree, the horrors outside of which they cannot survive, flightless birds are required to sacrifice their eggs to the tyrant vultures who run the city, led by one named Kondor. In exchange, the fowl are provided the fruit they need to survive. It’s a grisly exchange, because the young don’t survive, but that’s the way things are.

At least, that’s how they are until a bird named Huppu decides that she’s going to buck this terrible system and hatch her own egg herself. The next thing you know, they are thrust outside the treehouse city and into a Bosnian-animated adventure based on an ancient Persian work from the 12th century (which goes a long way toward explaining the Islamic-sounding name of the city, Birdabad.) It doesn’t look like your garden-variety animated film, even with Lionsgate’s muscle behind it.

The cast is led by Jeremy Irons, who voices Kondor, leader of the tyrannical vultures who rule Birdabad. It’s not his first venture into animated film; moviegoers will also remember he voiced Scar in the original Lion King.

Eventually, they team up with a blind bat named, well, Bat (voiced by Khalid Abdalla), hoping to reach safe haven beyond the horizon, where the sun sets. They wander from place to place before deciding to return home, hoping to effect change, part of which is about remembering that they weren’t always flightless birds.

It’s occasionally funny, eventually hopeful and Dove-approved for Ages 12+, though some of the horrors outside Birdabad may be a bit fearful for the young.

Birds Like Us shows how to overcome the odds by using teamwork.

Faith: None
Integrity: Sometimes, you have to take risks to overturn a bad system, which Huppu does to save her young.
Sex: None
Language: None
Violence: The nightmarish world outside of Birdabad might give pause to younger viewers.
Drugs: None
Nudity: None
Other: