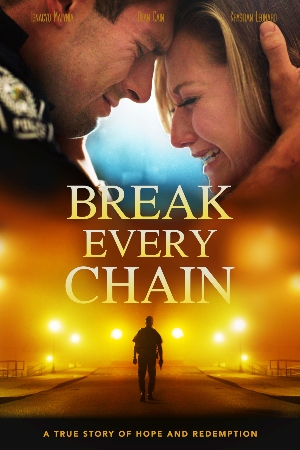 A police officer's battle with alcoholism, depression and devastating loss; and the true story of how God changed his life forever

Jonathan lost his dad at a young age, and ever since, he’s doubted God’s goodness. Now, a rookie police officer, Jonathan is facing death, hurt, and Satan’s worst every day on the job. Unable to unpack this routine trauma, Jonathan quietly turns to alcohol, but his attempts to hide his pain are impossible when he has an affair with a woman he has pulled over. With his marriage and job on the line, Jonathan must decide if humility and true bravery are worth facing to save his marriage, keep his daughter, and embrace a good God.

Break Every Chain is a powerful testimony based on the true story of Officer Jonathan and his wife, Stacy, featuring the grit and grace they embodied as Jonathan stepped into humility and Stacy chose forgiveness. With positive, Christ-like influences from the local pastor, a fellow police officer, and their family and friends, Jonathan’s family not only found healing, but now offers guidance, wisdom, and love for other officers and their families as they weather the storms brought on by the badge.

Parents of youth should note that heavy alcoholism is consistent in this film, and Jonathan’s one-time affair is implied (though nothing graphic is shown). In addition to darker elements, Jonathan’s job includes several scenes of dead bodies, though most are covered in a white sheet. Parents should use caution and discernment when deciding if their children should watch this film, as well as determining which themes to discuss before and after viewing

However, due to the powerful biblical elements—and the excellent cinematography—Break Every Chain is Dove-approved for Ages 12+.

Break Every Chain takes viewers on a true story of humility, repentance, and forgiveness as Officer Jonathan unpacks his past, fights against alcoholism, and seeks God to help save his family.

Consistent guidance from the local pastor and big themes of the power of prayer, repentance, and forgiveness.

Themes of humility, sacrifice, and family

Jonathan is seen entering a hotel with a woman who isn’t his wife—illicit content implied.

Jonathan’s police training and on-the-job experience include guns fired, a taser shot on a criminal, and several accounts of hand-to-hand fighting.

Multiple scenes include dead bodies covered in a white cloth (one dead body not covered), slow death of a loved one.