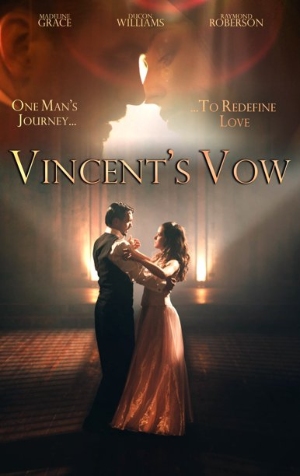 A broken 30-year-old man who struggles with commitment accepts a challenge to "learn what love is before claiming to love someone." The results are certainly not what he'd expect.

This movie focuses on the powerful influence and life-changing gift of love. The film is a bit disjointed at times, juggling several plotlines, and contains enough content as to warrant it receiving our Dove seal for Ages 12+. Yet it resolves the plots very well, calling on 1 Corinthians 13, the love chapter, to help bring the film to a satisfying conclusion.

Ducon Williams stars as Vincent Lovell, a single man, about 30, who lost a close loved one to a tragic accident, and the chance at love when he broke up with his fiancé. The movie opens with him chugging down a beer at a local bar. Later he attends the wedding of friends Steven and Lily, only to come on to a man’s girlfriend. He tells her boyfriend, “I don’t see a ring,” and he winds up getting belted. Vincent is a broken man in many ways, and he is not on a good path. He has become a womanizer and seems to get into trouble at every turn.

One of the best features of this movie is that it includes several memorable lines. For example, the minister tells Steven and Lily that becoming soul mates is a process. Another great, and funny, line occurs when a man finds out his wife is making pot roast for dinner. He is not happy. “Don’t be criticizing your wife’s choices,” she tells him. “You’re one of them!” He then asks, “What is a queen without her king?” “Historically, more powerful!” she replies.

In one scene Vincent is wanting to kiss his girlfriend while they are parked, and he comes on strong. “That’s all I am to you?” she asks. “Just a body? An object?” Vincent continues to drink and to search for answers. He has a memory of his sister that haunts him, not to mention the fact that his parents divorced, following a tragedy in their lives. He tries to help his mom out the best he can, and his mom is facing losing her home. He assures her if it comes down to it, that he has some savings stashed away that could help.

Vincent’s dad is a doctor, and Vincent visits him after his female martial arts instructor injures Vincent’s rib, telling him it is a lesson to not treat women with only lust as he has! His dad is a Christian and tries to get him to look to the Lord.

A co-worker Vincent works with gets in with the wrong crowd, drug dealers, and Vincent attempts to save his life when he sees them roughing him up, but his own life winds up in danger as a result.

The movie moves toward trying to solve the puzzle of what the greatest love story is of all time. Vincent wonders if it is Romeo and Juliet but it’s later pointed out that Romeo takes his life to escape his pain when he believes Juliet has died, instead of continuing to honor her memory. He’s reminded that it is a “tragedy” play, and not so much a great love story. He has people witness to him, including his father, that God’s love for man is the greatest love story of all.

Vincent is changed by the movie’s end, gaining a heart of servitude. We won’t spoil the film, but it wraps everything up nicely. That stated, there are some content issues to be considered. There is a fair amount of drinking in the film, and a character’s sister’s spirit shows up to help guide him. Fortunately, the ultimate guide is the Bible and 1 Corinthians 13, the love chapter. Therefore, the film has earned our Dove seal for Ages 12+.