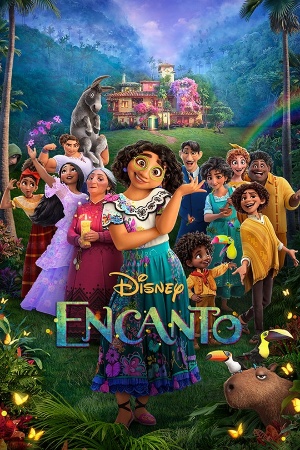 A young Colombian girl has to face the frustration of being the only member of her family without magical powers.

In this visually stunning tribute to Colombian culture, Disney outdoes itself with a unique story that celebrates family, acceptance, diversity, and purpose.
Encanto, which translated can mean “charm,” tells the tale of a magically “blessed” family called the Madrigals. In the beautiful valleys of Colombia, the family escapes persecution from conquistadors through the power of a miraculous candle. The candle creates a magical casita (home) for the matriarch, Abuela Alma, and her three babies, Pepa, Bruno, and Julieta. The home becomes a refuge and haven for the family, but goes a step beyond, endowing each of Alma’s children with a special “gift” — magical power — that will serve and grow the community built around their magnificent home.
We pick up the story years later, after the valley around the casita has grown into a thriving and colorful community, centered around the magic and selfless service of the “amazing Madrigal” family. Everything rests on them, and to keep their community going, the casita blesses each descendent of Alma’s with their very own special gift — except Maribel, the compassionate and fun granddaughter who appears to speak Casita’s own language.
From the beginning, it is easy to tell that Maribel is a unique, charming, and deeply empathetic soul. One wonders why Maribel, arguably a remarkable person in her own right, was not given a gift like her sisters and cousins. Feeling left out and very ordinary, Maribel still persists in loving and supporting her family with selfless devotion and not a trace of malice. She is a fantastic role model and the perfect heroine for a Disney film. When Maribel discovers that the family’s magic and even the casita is in danger, she becomes the hero nobody anticipated or even wanted! Without magical gifts, Maribel proves that sometimes our greatest assets are the ones that contain no fairy dust or mystery — gifts like kindness, listening, selflessness, love, and hope.
Through the film, we see a diverse and rich ensemble cast of characters with luscious backstory, individual struggles, and impactful realizations. Abuela, holding on to every last stitch of her miracle, is reluctant to accept change, even when it is good; the rest of the family, not entirely happy, but struggling to keep it all together, bows to Abuela’s wishes in fear of rocking the boat; Maribel’s own sisters each struggle with the weight of their gifts, showing that being ‘special’ isn’t always what it’s cracked up to be. Through Maribel’s unrelenting empathy and understanding, she is able to help her family in ways magic cannot. And I think, perhaps, that is Maribel’s true gift —helping others with their own, bringing out the “magic” in everyone and everything.
In this “zero to hero” story, Disney dispels with the tropes and formula, producing something new, energizing, and deeply meaningful. Maribel doesn’t have to leave home and go on some grand adventure to discover who she is, doesn’t need a handsome prince or even a grand quest; shoot, she doesn’t even need magic. She is the magic.
Encanto shows us that we can hold on too tightly when it’s time to let go, that sometimes our most magical qualities lie in areas others don’t always recognize or celebrate, and that you don’t always have to leave the ones you love in order to create positive, meaningful change.
Encanto is a triumph of animated cinema, and a film we’ll still be learning from for years to come as it solidifies its status among the ranks of Coco, Moana, and more as a new Disney classic. We award the Dove Seal of Approval for All Ages to Disney’s Encanto, a film that certainly lives up to its namesake.

In this visually stunning tribute to Colombian culture, Disney outdoes itself with a unique story that celebrates family, acceptance, diversity, and purpose.

There is no faith message, however references to "miracles" are made.

Husbands and wives are affectionate with each other (kiss, embrace, etc.)

During a dinner scene, some characters are drinking wine. Abuela acknowledges the potency of some drinks, saying, "The magic is strong ... and so are the drinks."

Magic, fortune-telling; one of the characters can be a bit frightening looking at times; a joke about two heterosexual characters hints at homosexuality "two guys fell in love ... with the family Madrigal."