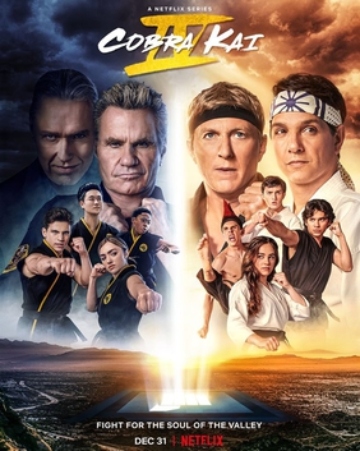 Decades after their 1984 All Valley Karate Tournament bout, a middle-aged Daniel LaRusso and Johnny Lawrence find themselves martial-arts rivals again.

The beloved Karate Kid franchise is at it again with its latest inception, Cobra Kai. Surprisingly, Johnny Lawrence (William Zabka), nemesis to karate hero Daniel LaRusso (Ralph Macchio) in the original 1984 film, is the protagonist here. Both men, now as senseis with dojos of their own, are in their 50s, and still in the San Fernando Valley, but the implication is that Johnny is a loser in life, while Daniel is a success, owning the biggest and most prosperous car dealership in the area. A well-written Netflix original that has been nominated for a myriad of awards, Cobra Kai consistently has 100% approval ratings, and has been picked up for a fifth season.

Original cast members, like Daniel’s mother Lucille (Randee Heller), and Ali (Elizabeth Shue), are on hand at times to support, as well as new teen faces that often give compelling and believable performances, such as Xolo Mariduena as Miguel, Tanner Buchanan as Robby, and Mary Mouser as Samantha, among others. Of course, the beloved Mr. Miyagi (Pat Morita) is a constant presence through reminiscences and consistent flashbacks, and the contrast between living a life on the “offense” as opposed to the “defense” is still highlighted through the continued rivalry between Daniel and Johnny that is mirrored in the teen cast’s relationships and life choices. Like the former duo, the latter struggle with age-old issues, such as identity, bullying, and facing one’s fears, and in this regard, Cobra Kai is for everyone: it is funny, suspenseful, relevant, and dramatic, with endearing classic ’80s music, compelling backstory, and loads of well-choreographed fight scenes, albeit at times a bit violent, like the all-out rumble at school at the end of season 2, episode 10.

One of the most clever, and more modern, aspects of Cobra Kai is how it flips the script: Nerds become cool, the girls are as fierce as the boys, and morality is often blurred, for unlike its predecessor, the characters and content can, at times, be rude, crude, and unethical. Johnny, himself, who is trying to be a teacher and role model, is bitter, hopeless, and angry, often seen drinking too much and shaming others, as he struggles with his past and his future. But as we watch Johnny learn and grow, and truly care about his students, we appreciate that he is a complex and often deeply grieving character, who continues to surprise the viewer. By season 3, while still incredibly rough around the edges, he is working to clean up his life, and make amends with his own teen son, whom he abandoned.

Meanwhile, Daniel also makes some questionable choices in his often blind attempts to outdo and sometimes obliterate Johnny’s efforts, believing firmly that his own style of karate, Miyagi-do, is superior to Johnny’s Cobra Kai methods. However, Macchio is as endearing as always, as he constantly returns to the valuable life lessons he learned from his master about balance and integrity, honoring Miyagi’s legacy by incorporating the timeless wax on/wax off exercise, and the many other disciplines that pull on heart strings for all who loved the original film — the training scenes with his students are especially powerful and emotional, such as when he takes Robby to the lake to learn balance in season 1, episode 6.

For all of Cobra Kai’s harsh characteristics, there is much worthwhile here; the major themes that play out, such as “there are two sides to everything,” and “appearances can be deceiving,” are well constructed. One of the strongest moments of the show is when Johnny and Daniel finally determine to work together against the new rival in town, and in season 4, episode 3 they learn each other’s styles, setting an example for their students not to view an opponent as an enemy, but instead, seek to make amends. Daniel, especially, teaches in season 4, episode 4 that “avoiding conflict is one of the most heroic things a person can do,” but unfortunately, this camaraderie once again breaks down, and by the end of this episode, Johnny and Daniel battle it out, one sensei against another, in a private tournament that leaves the viewer on a cliffhanger about everyone’s future.

Cobra Kai is a must see for all who loved the original film — it feels like it picks up where things left off, only three decades later, and this wild ride is shocking, exhilarating, heartwarming, and inspirational.

Some eastern spirituality, mostly in the form of meditation.

Daniel LaRusso often embodies this quality, as well as his family members, and several other key characters, seeking to do what is right by others. Many of the less integrous are inclined to show compassion.

Multiple references to sex through the suggestive mention of body parts, pornography, forward advances by some characters, and crude jokes

Students smoke weed in one episode, frequent consumption of alcohol by underage students and adults — adults drink with underage youth on two occasions

Multiple instances of sometimes disturbing bullying, even by adults towards students