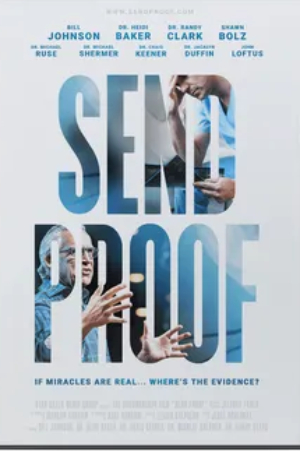 Millions of people claim to have experienced miraculous healing. Send Proof asks the question "Where's the evidence?" When his former pastor leaves the faith, director Elijah Stephens embarks on a journey to find evidence for miracles. Along the way, he interviews atheists and skeptics, medical researchers and academics, and those claiming to have experienced miraculous healing. Will he find the proof he seeks?

A Christian since he was a child, director Elijah Stephens seeks evidence for declared healings and miracles in this fascinating and timely documentary. The intriguing documentary opens with various clips of people being told they are healed, and one evangelist waves his coat toward people who fall on the floor, and a man is seen rolling on the floor. In the middle of excessive showmanship, is there proof of people who have actually been healed after receiving prayer?

Elijah seeks out pastors, doctors, philosophers, scientists, and various authorities to find the answers he is searching for. How many of the cases of healing have been documented? Has someone claimed healing but then relapsed into their former health problem?

One man makes the skeptical comment, “If you’re looking to prove God through miracles, don’t!”

One man believes miracles are a dying breed due to modern technology. But the other side of the coin reveals a boy who was healed in Guatemala. And a person with cancer was healed. Another cynic jokes about a dog show and could a dog with a shortened tail be healed, and have his tail grow back.

Stephens shares all sorts of responses in this documentary. There are those who firmly believe that miracles do not occur and even if people regain their health this doesn’t prove there is a God. But what about those who had serious health issues but were healed following prayer? Stephens learns that some people didn’t have proof of healing due to the fact they couldn’t afford to go to their doctor for the evidence, and some felt there was no need since they were doing so much better. Stephens reminds the viewer that in the Bible when lepers were cleansed of their leprosy, they had to go to the priest for him to confirm their healings. This was the evidence for it.

Stephens takes a sincere approach in seeking out the truth. He was raised in a Christian home and his grandfather was an elder at a Presbyterian church. Despite facing some moments of doubt and many questions, Stephens prayed at a camp and felt the peace of the Lord. He builds on his experiences of faith later in the documentary. Dr. Michael Ruse doubts in God’s existence because of people like Anne Frank dying in a death camp. Some who are interviewed doubt the supernatural plays a part in sudden healings of people.

Dr. Gary Habermas questions how life could come from no life? He shares that 89% of Americans believe in the existence of God. And 79% of Christians believe miracles can still happen today. We see clips of the Reason Rally in Washington, D.C. where atheists meet to attempt to get more secular legislation, but Christians show up to share their testimonies and faith in God.

One evangelist is exposed as having used an audio device in his ear and having had his wife relay information to him about the various people in his meeting. Bill Johnson from Bethel Church comments that some people have forgotten to be humble servants. But then we are shown people who, after prayer, were healed, and have the documentation and evidence to back it up.

One young man who had lost much of his intestines received prayer and documentation showed that it had been lengthened. And more evidence includes 200 million people in 10 countries who said they have witnessed divine healing, some in Pentecostal and Charismatic churches, but not all were from that particular church group. Dr. Joshua Brown shares about a blind person being healed in Mozambique. And, Madolyn Ford from Holland, Michigan, lost her sight for several years but her husband, Acie, prayed for her and her sight was restored and she saw his face. And she saw a photo of her child, whom she had never gazed on before this moment. She stood by her husband, a pastor, and she knows God healed her. The evidence is presented.

Despite the bitterness of some people toward God, there is always someone like Chris Gunderson who is mentioned. Having had severe digestive problems and a feeding tube for years, his parents always told him he was normal and made sure he lived a normal life, participating in sports, for example. Chris thought healings were only for biblical times until he was prayed for and no longer needed his feeding tube. He said he enjoyed a Chinese meal following his healing and his healing is documented.

As Stephens says, “I want to show the world there is evidence for miracles.” To its credit, the documentary also states that healing can come through physicians as well as the Great Physician.

A few other testimonies are shared as the credits roll. This is a wonderful documentary which should encourage people to keep hope alive if they are facing a physical battle with their health. Although the film is not intended for young kids, it shows people of different ages, including children, who have been healed of various health issues. Therefore, it has earned our Dove seal for All Ages.

This terrific and inspiring documentary will bless your entire family as it shows there is always hope for a miracle, no matter how bleak the situation.

Several people give God the glory for their healings and mention Jesus.

Several people share proof of their healing; the narrator and documentarian is fair in his approach in seeking evidence of divine healing; a young man shows gratefulness to his parents for treating him in a normal manner during his illness.

Just in the medical realm, used to heal.

A few patients’ stomachs are seen as they deal with their illnesses.

There are a few atheists and non-believers who doubt in God and who question Him as being the “right kind” of God; people are seen suffering in some situations, but many find healing.