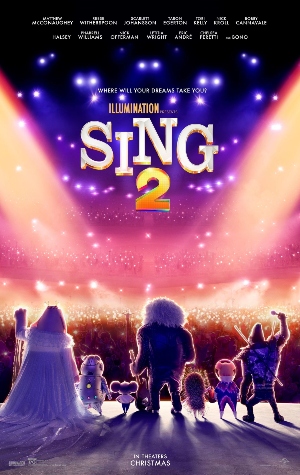 Buster Moon and his friends must persuade reclusive rock star Clay Calloway to join them for the opening of a new show.

When we last saw the Moon Theater troupe, dauntless koala Buster Moon was trying to save his floundering dream by putting on a remarkable talent show. Now a local success, Buster is out to show the world that he’s more than just a small-town theater producer with big city dreams. After recruiting the help of his talented cast (and the delightful Ms. Crawley), he sets out to impress entertainment mogul Jimmy Crystal and put on a show that’s “out of this world”. But Buster’s big dreams (and big lies) are soon to catch up with him when he discovers playing in the big leagues is far more challenging — and dangerous — than he prepared for. With high stakes and high notes, the Moon Theater crew will risk it all to put on the show of a lifetime and overcome their individual fears.
Sing 2 promises to be bigger and better in every way versus its predecessor: bigger sets, better costumes, more songs, more celebrity voice talent, grander locations and adventures. In part, this is accomplished by the addition of Bono in a fantastic debut voice role as retired rock star lion Clay Calloway, a recluse mourning the loss of his wife; “anti-pop-star” Halsey as Porsha Crystal, a talented but spoiled she-wolf; and Letitia Wright, Pharrell Williams, and Eric Andre in key supporting roles. Typical of his head-in-the-clouds personality, Buster ushers the crew to Redshore city (think Las Vegas, but everyone is an animal) in the hopes of being “discovered” by the intimidating Mr. Crystal. In an effort to win Crystal over, Buster improvises a show idea and even promises he can bring Clay Calloway — whom no one has seen in 15 years — into the show. Of course, chaos ensues, and the gang must overcome obstacles with the aid of a spectacular and diverse array of musical numbers, showcasing each one’s talent.
In the first Sing movie, our characters were a group of rag-tag hopefuls trying to win a prize and shake off the doldrums of their lives. But in Sing 2, our characters are already mildly successful, albeit battling internally to show the world what they’re made of, and proving themselves on a much larger (and scarier) stage. To do this, each character must overcome a personal challenge and push themselves further. For Clay, it’s healing from grief and depression; for Rosita and Johnny, overcoming fear and doubters; for Moon it’s self-doubt and integrity; and for sweet Meena, it’s a matter of confidence and leaning into oneself. With the help of their new friends and the ever-hilarious Ms. Crawley, the characters stretch and expand their horizons both externally and internally. Only then can they be “out of this world.”
I love that in Sing 2, we are exploring the internal motivations and fears of our favorite characters farther than before. In some sequels, we find character development lacking, but that is not an issue here. The fine folks behind the film have ensured that we dive deeper into each character, including gaining insight into the lives and personalities of ones we haven’t seen a lot of yet, like Ms. Crawley, Nana Noodleman, and Gunter. The addition of new, strong characters — such as Nooshy, Klaus, Porsha, and Clay — doesn’t detract from our main cast at all, and instead enriches and drives the story forward. There’s just enough newness to make the sequel fresh and exciting, but you’re not deprived of your favorite returning characters.
The first Sing film was all about Buster Moon — his dream, his vision, and his goals, fulfilled by his rag-tag cast. But the sequel allows the franchise to morph into an inclusive pursuit in which everyone’s dream is being acknowledged, pursued, and respected. If “Sing 1” was Buster’s story, Sing 2 is everyone’s story. From the song choices to the characters and even the Rodarte costumes, Sing 2 is an immersive and inclusive artistic experience that ensures there is something for all of us.
More than that, Sing 2 offers an emotional depth that is mature and seasoned. Touted by the creators as a tale that expounds on the healing power of music, the film is anchored by the slow and grounding array of U2 songs and Calloway’s commanding, yet solemn, presence. Built around that anchor is a fast-paced, music-driven story that draws from a variety of genres, artists, and emotions. Adults will appreciate the slower, even somewhat nostalgic and melancholy moments of the film, while kids will enjoy the melodic adventure and animated antics. Indeed, Sing 2 delivers on its promises as the characters are encouraged and, as a result, their lives improved, by music.
Filled with positive whole-character arcs, powerful examples of personal growth, integrity, loyalty, and friendship (minus Buster’s original lie), Sing 2 is a delightful musical adventure adults and kids can both enjoy. Sing 2 is awarded the Dove Seal of Approval for All Ages.

From the song choices to the characters and even the Rodarte costumes, Sing 2 is an immersive and inclusive artistic experience that ensures there is something for all of us.

No Christian message, faith in oneself.

Song lyrics and dance moves are mildly suggestive at times.

Some mildly perilous scenes including one character threatening another, car accident(s), etc.