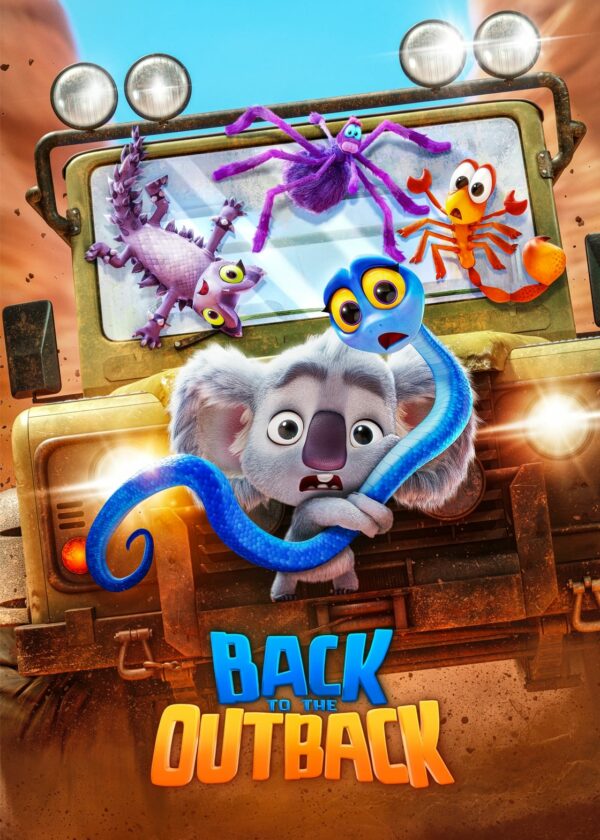 Back to the Outback

Tired of being locked in a reptile house where humans gawk at them like they’re monsters, a group of Australia’s deadliest creatures plot a daring escape from their zoo to the Outback.

Rich in characters, fast-paced and featuring some peppy musical numbers, this film is bound to entertain family members, ages 12 and above. It contains a couple of innuendos and tongue-in-cheek moments, peppered in a few spots in the movie. The animation is terrific. The main characters include Medusa, a blue snake, also known as Maddie. Also in the mix are Zoe, a lizard, Nigel-a scorpion, and a spider named Frank, who does a mating dance with little response from the lady spiders. He also does a Brando bit when he cries out the name “Stella!” in one scene.

A cute koala known as Pretty Boy, escapes the Wildlife Park, headed for the blue mountains and freedom. P.B. (as he is called) is tired of all the park guests and wants to find others of his species. Maddie is aghast when she learns that because of her lethal venom (she’s a taipan snake) that most of the park visitors are terrified of her. “I’m not a monster, am I?” she asks. So, she and the gang decide to follow P.B. and seek freedom too. Many of the creatures are tired of being locked up in the dangerous creatures’ exhibit. They feel like they are just on display for the humans. So, they plan their escape to the Outback. This doesn’t set well with Chaz Hunt, the park director, who is a “Steve Irwin” type, with his energy and voice. He, along with his son, Chaz Jr., leave to find the missing animals, and before you can say “Steve Irwin!” the adventure becomes a nightmare for several of the characters.

Featured in their escapades is Dolly Parton’s “Nine to Five” song, as well as other energetic songs. Another amazing character is a saltwater crocodile, named Jackie, who can, according to one character, “swallow you whole.” When Jackie attempts to save Chaz Jr., who has fallen into the water, her motive is misunderstood. In fact, one of the themes of the movie is that things aren’t always as they appear, and this also refers to Chaz Hunt, who has a side no one knows about. He tells Jr. that he once fought a giant python, and that’s how he lost Jr.’s mother. But is that the true story?

At one point Nigel stings P.B.-who was being difficult and impossible-and he goes to sleep for a while. There is some physical violence and physical comedy in the movie, which for the most part is played for laughs. There are humorous moments for sure, including a scene in which the gang comes across a shark in the water. He flashes his big teeth, and they shriek in terror. “I get that reaction a lot,” he tells them. “It’s the smile, isn’t it?” And in an early scene in the film, Maddie is about to perform and is told to “break a leg.” “She doesn’t have any,” comes a reply.

It’s not been easy for the gang. We learn that Duncan, a dung beetle, wound up in the belly of a seagull. The gang’s lives haven’t been perfect and P.B. refers to his therapist. But the gang soon pull together, and they end up liking P.B. which they never thought they would, as he is a bit rude from time to time.

As stated, there are some cautionary scenes for parents to be aware of, including one in which Frank, surrounded by female redback spiders, says he’s never been so aroused in his life. And one of the spiders, named Legs, says that she will be eating her husband later.

When Legs threatens to kill P.B. Maddie tells her, “He’s with us.” It’s a nice little scene of a friend defending another one. When P.B. gets out of line, Maddie simply smacks him with her tail! And there is some creature romance included. Two toads named Doug and Doreen are a couple, and they kiss each other passionately. It’s even a French kiss. Ewww! Those toads have long tongues.

Some Tasmanian devils show up, named Lucifer, Beelzebub, and-Dave! Yes, really. The fast-paced adventures seldom slows down. Chaz winds up catching the gang, but the conclusion should please most viewers.

The film is entertaining with a few content issues, including the use of the word “Da*n”. It also shows the importance of taking risks in life and that sometimes a person can become friends with an unlikely person. It has earned our Dove seal for Ages 12+. Parents should consult our content listings, so they can be fully informed.

Back to the Outback is a fun adventure to watch, fast-paced and character-rich.

Characters look out for one another and protect one another; A female crocodile attempts to rescue a boy who has fallen into the water; two toads are loyal to one another, as they are a “couple.”

It’s stated a woman was not faithful to her husband; a spider mentions being aroused a few times; two toads French kiss with their tongues.

A scorpion snaps at a character; a scorpion stings another character to put him to sleep; when some characters think P.B. might have rabies, they rave, “Kill him!”; a spider mentions she will be eating her husband; a few tranquilizer darts hit characters in the neck; kids burn ants with magnifying glass; kids give each other wedgies; a man cuts a doll with a knife; a knife is brandished a few times; a kid threatens to thump another kid; bats with fangs hiss; a snake is pushed out of a truck; a man is struck with a metal lid; a few other moments of physical comedy, played for laughs; a boulder knocks a truck off a cliff; a character kicks another character.

Tranquilizer darts are used on characters.

A man is seen from behind with torn boxers and part of his rear cheek is seen; shirtless character in a scene; a character says he grew up living near his aunt’s lingerie store.