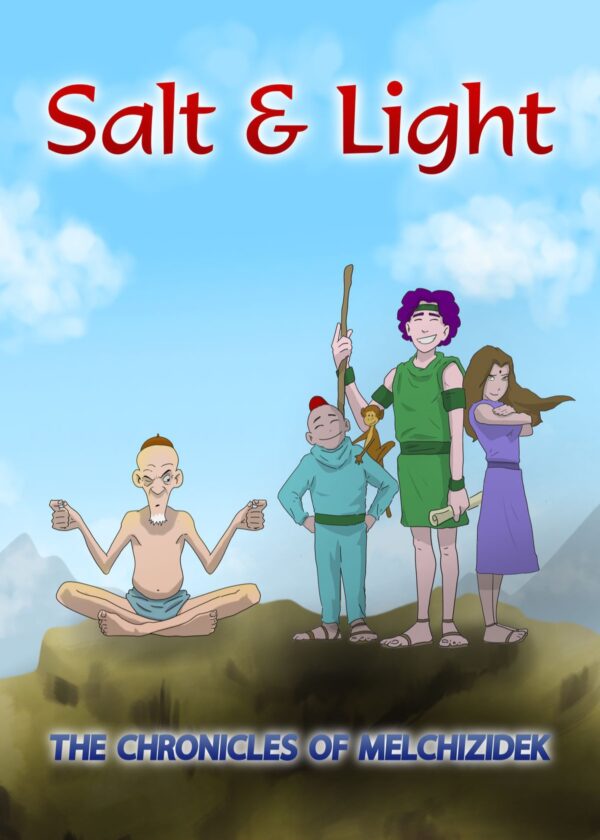 Salt and Light: The Chronicles of Melchizidek: Episodes 1 & 2

Salt and Light: The Chronicles of Melchizidek is an epic animated series, that chronicles the story of Melchizidek and his battle against an evil high priest who has placed a wicked king on the throne. Armed by the guidance of the holy man, Asher, Melchizidek is about to enter an adventure he never would have dreamed of.

This is an interesting, animated film, which seems to take place in India. A man named Asher, who is considered a holy man, has raised young Melchizidek, and Asher is a funny character, grumpy and yet comical. For example, when Melchizidek tells Asher he has a question, Asher says, “I knew this day would come!” But Melchizidek’s question is not about his adoption and where he came from, but “Actually, I was just wondering if we had any honey cakes!”

Yet after the subject is brought up, Melchizidek admits to being curious as to his background. He goes into great length, explaining that for many years they enjoyed peace and prosperity in the beautiful land of Nosic, until the king and queen were struck by a mysterious illness. The king was given medicine but did not survive for long. The elder son, Bounder, assumed the throne with his brother, Vespidi, at his side. But Golick, the high priest, had plans of his own.

In another humorous scene featuring Asher, Melchizidek asks, “Golick? Golick?” “Yes, of course, Golick, Golick! Now pay attention!” responds Asher impatiently. Asher had mentioned to Golick that “treachery is always paid in full,” but Golick did not heed the warning. The land was struck with a merciless famine and Golick blames Asher for it. King Bounder asks about this, as he says “Asher has been loved by the people, and he has fed the poor.” But Golick convinces Vespidi to usurp the throne from his brother Bounder. Together they drive Bounder from the kingdom. The new king’s taxes are high, and the people suffer for it. A young woman named Tianara gives alms to a poor man until her mother slaps the money from her hand. Her mother soon plots with Golick to have Tianara marry the evil King Vespidi.

Due to the over-taxation, many landowners lose their land, and Asher comments that, “Wealth that is stolen is no wealth at all.” Golick is livid with Asher and tells him he may return to the court at his “own peril.” King Vespidi banishes Asher from the court “until the rains come.” Despite her mother’s insistence, Tianara knows her father would not want her to marry the wicked King Vespidi. Golick has her fettered by chains and tells her to “get over it!” In another humorous scene, Farla, who waits on Tianara, tells her that one day as queen that Tianara would fix the ills of the kingdom. “No thank you!” says Tianara, who wants no part of marrying Vespidi.

The episode concludes with Asher giving a secret message to Melchizidek to carry to someone who can help. In Episode 2, titled, “Chaos,” some more comedic moments occur when a monkey steals the letter! “Blasted monkey!” raves Melchizidek. “It gets stolen by a monkey!” says Melchizidek. “It’s like there’s no way you can mess this up!” In the lower left screen of the picture, we see the monkey holding up a sign that says, “I know! Right?” It’s a chuckle moment for sure.

The feisty Tianara tells Vespidi that he looks ridiculous in his robes. The king leaves the tent and Melchizidek says, “Ouch!” as he was listening in near the tent. When it finally rains after the long dry spell, the king tries to take the credit, but the people still complain about the outrageously high taxes. And when Tianara comes up missing, Golick blames Asher, and says, “He’ll pay with his head!” In the end, Luka, a loyal friend, sticks with Tianara, Melchizidek, and the monkey! What will the conclusion be? The content includes the belief in good in the world, but Asher is not mentioned as being a biblical believer, but a “holy” man. What motivates him is unclear. There are a couple of scenes where a knife is being held on a character, but nothing comes from it, and no one is harmed.

THINK ABOUT IT: There are some good discussion points in the film, such as marrying for love and not a position, and how one should not let the promise of power poison a close relationship. A good discussion could be had with parents and kids about the choices they make and the consequences of those choices. And how the Bible helps them to understand what is right and wrong. This film has earned our Dove seal for All Ages.

THE DOVE TAKE: This is a nicely animated film that shows that doing what is right for the right reasons is always the best course of action.

A few characters want to stop the over-taxation, and a few make good choices, such as Tianara, who does not want to marry an evil king just to become queen; Asher stands up to the wicked high priest Golick.

A knife is held on a couple of characters, but no harm comes to them.

Tension between characters; a priest works to get a good king out of power and to place his evil brother on the throne; a character is called a holy man, but no scripture is used.