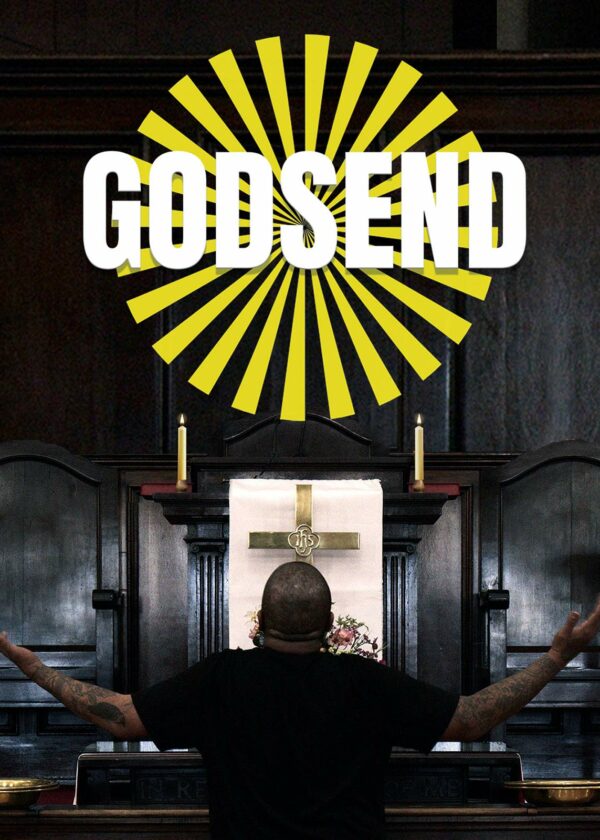 When a man (Michael Ochotorena) wakes up under a bridge to discover he no longer knows who he is or how he got there, his life brutally unfolds as a homeless person. Enduring the scorn of random people, the elements, and coping with a terrible head injury, he finds hope in the unlikeliest of friends: a dog and a pastor (Greg Mason). Together, they explore kindness, compassion, and what it means to live — and to become a Godsend to others.

In this Job-meets-The Good Samaritan parabolic film, an injured man awakes under a bridge to find he has forgotten who he is. Robbed, confused, and injured, “John Doe” seeks help from those around him, only to be rejected, ridiculed, and abused at every turn. John’s anger and understandable frustration are palpable in every step as he tries to find someone, anyone, who will show him kindness. This kindness is ultimately found in an unlikely form — a dog. The furry friend leads John to the local Mission, where he befriends the pastor, who tells him about salvation in Christ. Still unsure of his identity, John resolves to be a man of integrity and gentleness, despite the numerous challenges he’s facing.
Godsend is a film with good intentions. While it certainly doesn’t have the production quality or acting chops of a blockbuster, the film is stirring in a sense, and Michael Ochotorena provides a desperate and emotional performance as John. Although the basic idea and plot of the film are great, the storytelling and confusing cinematography were, in my opinion, disappointing. Godsend tries very hard to be gritty, but ultimately relies on a lot of cliches, candy-coated Christian lingo, and carefully tied plot ‘bows’ (like all the people who wronged John suddenly apologizing to him), while neglecting important and meatier details (like why John was in that neighborhood in the first place). It’s obvious that the filmmakers and actors poured their hearts into this piece, and while it truly is a wonderful idea, the execution left a lot to be desired.
However, to the film’s credit, watching Jesus’ parable of the Good Samaritan played out so colorfully on film is jarring. As I watched, I couldn’t help but think that the reactions the townspeople were having to John’s requests for help were over-exaggerated … nobody could possibly be that mean and cold … could they? Yet that is exactly the scene Jesus described in Luke chapter 10 — a man completely overlooked, abandoned, and despised. And it’s not too far off from what occurs to many people every day in the real world. It is no secret that in the U.S., those experiencing homelessness, mental illness, and the like, are often treated poorly and in some cases, abused. Godsend shines a light in a dark corner of our society’s consciousness — how are we treating those who need our help the most? Even those John approached who claimed to be healers and helpers were of little comfort to him; instead of listening with grace and a posture to serve, they were dismissive and unaffected. This attitude flies in the face of everything we’re taught as believers, with Christ himself instructing us to “do unto others as you would have them do unto you” (Luke 6:31). John stumbles around injured and ill for days without being shown any mercy, begging the question, “Who is his neighbor?”
Another startling and important truth that Godsend reveals is found in John’s quest for the truth of who he is. He’s faced with the man in the mirror, both literally and figuratively. On the outside, John looks like a common gang member, a threat to society, a “bad guy” — a guy that many of us would lock our car doors upon seeing out and about. He has trouble reconciling this with his feelings toward others and himself, including those who have wronged him; he feels frustration, and anger, but does not seek retaliation. Through the pastor’s help, John realizes he is not the person people think he is — he’s not a “bad guy,” but a gentle, kind man. John’s story proves that humans are terrible judges, and that looks can be deceiving. John steps up and shows Christlike integrity when those around him do not, which impacts the lives of those he meets.
Like any of us in his position would, John bounces back and forth between serene faith and incredible discouragement; his greatest comfort and companion (apart from the pastor) is the street dog that saved his life. Things start to look up for John when he is blessed with a job and a place to sleep, but he is still unaware of his true identity, clueless as to how he became injured, and unsure of how to proceed. He relies on his faith in God, completely in the dark about what He is doing in his life. A predictable but happy ending closes out John’s story without offering a solid takeaway or clear message, but providing multitudinous opportunities for self-reflection.
I’m not sure what overarching theme Godsend was hoping to deliver, but the lesson I see is this: radical, unconditional kindness. To fulfill the directive of Christ to love others as He has loved us, to treat others how we’d want to be treated, to extend mercy to others regardless if they “deserve” it or not. Due to some mildly violent scenes, Godsend is awarded the Dove Seal of Approval for Ages 12+.
The Dove Take
Godsend shines a light in a dark corner of our society’s consciousness — how are we treating those who need our help the most?