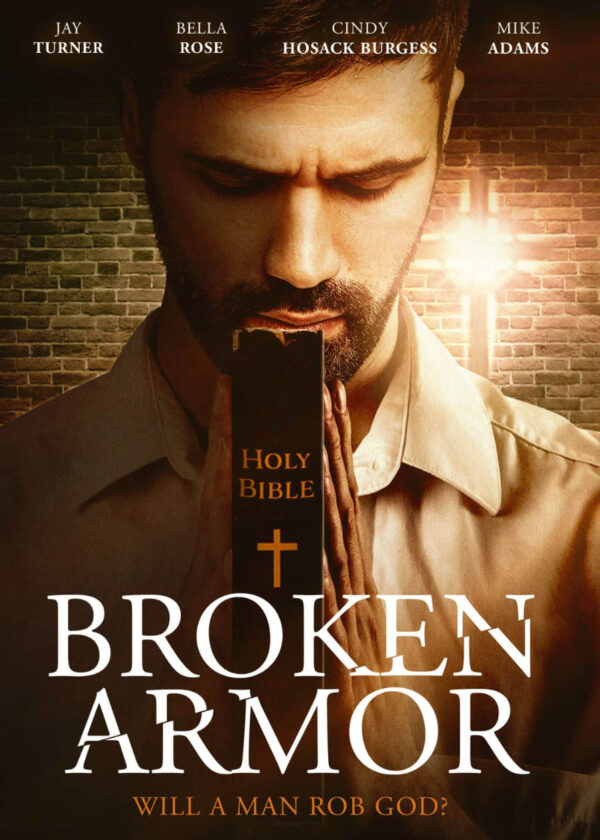 Diverging from his faith to borrow money for his daughter’s surgery, Tristian’s lender orders him to rob a church to test his loyalty.

Editor’s Note: This movie’s original title was The Forgiven.

This movie is a contrast in many ways-it uses scripture and is about a Christian man’s journey to the dark side of life, but even in it showing his return to his family, the Lord’s name is taken in vain in the film. And at one point he robs a church to satisfy a crime lord’s wish and then, later, the church board and pastor have a strong disagreement over whether the man, Tristin Harris (J.G. Turner), should be forgiven.

Tristin’s 10-year-old daughter, Maggie (Bella Rose), is suffering from a rare brain tumor and a very costly surgery is required. The strain places tension between Tristin and his wife, Alexis (Cindy Burgess).  Tristin tells Alexis he feels as if he’s failing Maggie and her. “This is not easy,” replies Alexis. “It’s hard on me too. We cannot lose our faith.” Tristin admits to losing his faith. “Honey, without faith we don’t have hope,” replies Alexis. “Maggie is in the hands of the Great Physician.” She reminds Tristin that he is the man of the house. “I can’t fight death!” he says in frustration.

In the mean-time Maggie continues attending school until things can be figured out. Enter a Russian gangster, Val Drexel (Mike Adams), who gives Tristin a ton of money for Maggie’s operation, but with a catch: Tristin has to commit crimes for him. Tristin agrees, saying, “This is my daughter’s second chance.” “Wrong,” says Drexel. “This is slavery.” He tells Tristin, “Mr. Harris, if you take the money, I own you.” He adds that if Tristin backs out of their agreement later, that he will kill his daughter, his wife, and even the family dog! “This is not a one and done situation,” Drexel tells Tristin.

Later, Alexis tells Tristin that Maggie was too ill to attend school that day, but they watched movies all day and then, after she ate, she threw up.  Tristin shows Maggie a check for $250,000 he had converted from the cash. “Where did you get that?” she asks. He tells her it was a check from an anonymous person at church. Maggie indeed has the operation, but the money doesn’t solve all their problems. Feeling guilty, Tristin doesn’t want his wife in the same room with him, urging her to go to bed and read. She wants to be with him, and this causes a strain on their marriage. Tristin begins to drink. After a while Alexis tells him, after slapping him, “Snap out of it! I’ve had it with you. I’ve had it with your drinking and your sarcasm.”

A young assistant to Drexel keeps an eye on Tristin as he continues to do whatever Drexel asks. And, ultimately, Tristin is asked to rob the church he had attended! And the robbery takes place during a Sunday morning service.

Eventually a showdown takes place between Drexel and Tristin, with some violent results. And there is a twist thrown into the plot regarding Drexel’s young assistant. Also, a twist involving Drexel is revealed. And, later when it’s learned that Tristin robbed the church, the pastor and board argue over forgiving him or pressing charges. The pastor’s wish to forgive him is not a popular one.

The movie features scripture and the importance of family. But it also features some bloody violence and the use of our Lord’s name in vain. Therefore, it falls short of earning our Dove seal.

This movie shows a turnaround in life is possible, but it does so by featuring strong language and violence and falls short of being a family-friendly film.

Colossians 3:13 is seen on screen, about forgiving one another; church scenes; a man is torn between his faith and following a dark path and he must eventually make a decision.

A wife encourages her husband to keep the faith despite their tests and trials; the theme of fighting for family is one of the themes; characters are shown who are willing to forgive a man’s grievous mistakes.

Some bloody violence including men that are shot and one dies; bloody wounds; a man shoots a long-time employee just to show another man he has no problem in killing; a church is robbed; guns held on people; a wife slaps her husband.

A man turns to a gangster for help in securing money for his daughter’s operation; tension between characters including a few arguments.