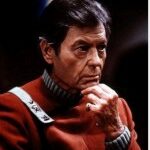 Borrowing its subtitle (and several lines of dialogue) from Shakespeare, the movie finds Admiral Kirk (William Shatner) and his fellow Enterprise crew members on a diplomatic mission to negotiate peace with the revered Klingon Chancellor Gorkon (David Warner). When the high-ranking Klingon and several officers are ruthlessly murdered, blame is placed on Kirk, whose subsequent investigation uncovers an assassination plot masterminded by the nefarious Klingon General Chang (Christopher Plummer) in an effort to disrupt a historic peace summit. As this political plot unfolds, Star Trek VI takes on a sharp-edged tone, with Kirk and Spock confronting their opposing views of diplomacy, and testing their bonds of loyalty when a Vulcan officer is revealed to be a traitor. With a dramatic depth befitting what was to be the final movie mission of the original Star Trek crew, this film took the veteran cast out in respectably high style.

“The Undiscovered Country” is referred to by Shakespeare in his play “Hamlet” and refers to death. It is an appropriate title for this sixth “Star Trek” film because not far into it a high-ranking Klingon official is assassinated. It happens at the beginning of negotiating a peace treaty between the Federation and the Klingons, and the dying official’s last words to Captain Kirk are, “Don’t let it end this way, Captain.”

There is a lot of action in this film with the use of a few Shakespeare quotes which match the situations nicely. Sulu is now the captain of his own ship, the Excelsior, and he moves in to help Kirk, Spock and McCoy, and the rest, at a critical time. Unfortunately, strong language including one character wishing that a certain group would go to “H” prevents us from awarding this picture our Dove “Family-Approved” Seal.

Sex: An alien kisses a character.
Language: J-1; G/OMG-5; FGS-1; D-5; Bloody-1; S*rew Up-1; H-3 (Including one "Go To H..."); A comment about genitals being on an alien's knee.
Violence: Several alien characters are shot and small capsules of blood leave their bodies and float in a gravity-free area of the ship; a severed arm; an assassination of a high ranking official; a few fights with aliens including thrown punches; blood on a captain's face from fight; explosions as ships attack each other; an alien is seen with flames surrounding him on ship.
Drugs: Smoking; alcohol consumption including Romulan ale.
Nudity: None
Other: An angry man whose son was killed by aliens says "Let them die!" when they are in trouble; the expulsion of Adam and Eve from paradise is referred to as an earth mythology although the event is not denied.