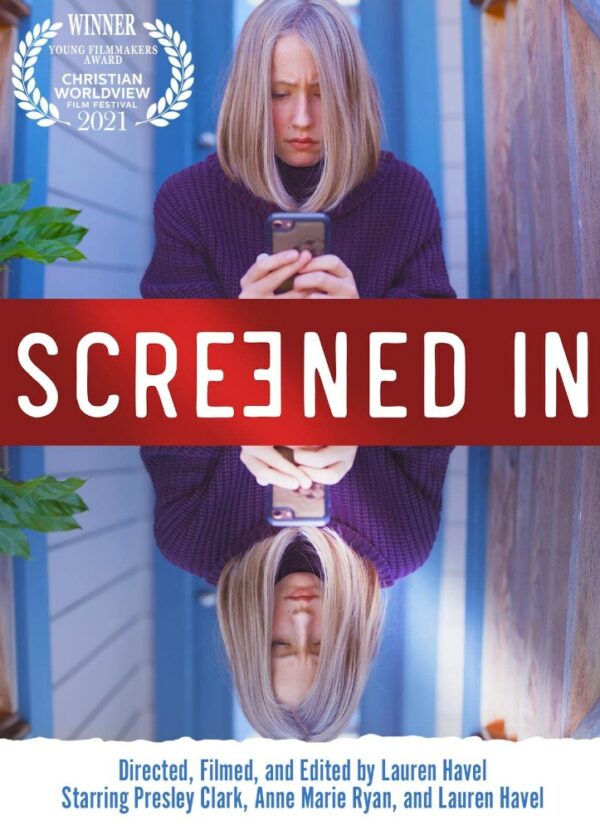 Peyton Hawthorne becomes disillusioned when she realizes her phone has taken over her life. She attempts to tackle her addiction but calamity ensues.

This is a movie with a message! It deals with the problems of too much use of social media, including Smartphones, in a powerful way and it uses several examples of misusing time and misplacing priorities.

Directed by Lauren Havel, who also co-wrote the screenplay and plays Skylar in the movie, the lesson is driven home hard, that Smartphones and too much screen time can cause as many problems as they can provide benefits. It’s up to the user to set limits and boundaries.

Several girls, including Peyton, Skylar, and Courtney, make a pact that they will put away their Smartphones for a time, and not even use computer screens. In fact, when Courtney needs a certain book for a project, she winds up going to the local library and she admits it was helpful to go there. Although, she brings a book home, which has a cover, and feels the book is a bit “antiquated.”

In one scenario, a girl named Morgan picks up her boyfriend’s phone, and sees that he (Tyler) has told another girl she has turned into a beautiful young woman. This doesn’t sit well with Morgan.

The potential problems of cell phone use is demonstrated, such as when a woman named Chloe uses a crutch to get around because she was texting while driving and got into an accident, which broke her pelvis and also caused bleeding on the brain for a time.

When the girls follow their promise to go through a “digital detox” from social media, they find they are talking and interacting more, and they enjoy it. The benefits of having a Smartphone are examined, including using GPS, Face Timing an aunt in Thailand, and taking selfies.

However, the consequences of not using social media correctly are plainly acted out. One girl is babysitting a few children, and she begins to look at her phone, ignoring the kids who are playing outside. One of them, Dylan, gets into her prescription pill bottle of Prozac, and he takes several pills. He winds up being taken by ambulance to the hospital. He goes into a coma and the question is if he will survive or not. Not only does this happen, but another young boy takes off down a sidewalk, and gets into his neighbor’s chicken coop!

One girl has put away her phone in a cupboard and ignores the ringing phone although it is obvious that she would like to answer it. Her friend leaves her a rather hateful message about ignoring her calls. And the girl receives a text, calling her a “loser”.

The girls had admitted to being “addicted” to their phones, with one admitting she slept with it under her pillow.  One girl admits to having checked her phone every five minutes. One says she stayed up, looking at it one night until 4 a.m. and then on another night she stayed up the entire night. In one humorous scene, one girl is talking to her friend who is on her phone and ignoring her. Finally, to get her attention the girl says, “Last night while I was sleeping my dog got abducted by aliens!” Her friend replies, “Yeah?” while still looking at her phone. Another girl says that not having her phone is like she’s missing an “appendage”!

One girl says she’s done research (it’s not stated where it came from) and says teen suicides have nearly tripled since the introduction of the Smart phone. If it is true, one can surmise that cyber bullying plays a part in it. Another comment is made that brains on Smartphones are similar in MRI’s to people who have used drugs. Again, no source is listed. But there’s no denying that many people, including the youth, are addicted to social media. And, in one other example of the over-usage of Smartphones, a lady walks into a store, and spills a Margarita mix from her purse onto the floor as she is staring at her phone.

The movie features a terrific song about going to God with everything in prayer. It mentions seeking Him even during painful times. And the blessing of attending a Bible camp is mentioned also. The music and score for this film is quite good.

This movie has earned our Dove seal for Ages 12+. Its message is clear and undeniable, that social media use can be abused.

This movie powerfully drives home the message that the use of social media can yield benefits, but boundaries must be set to avoid potential pitfalls.

A Christian song and the mention of a Bible camp; people pray for a little boy.

Several girls make an effort to stay away from social media for a time to better make use of their time; a girl learns a valuable lesson when being on her phone allows two boys she was babysitting to get into trouble; girls attempt to be accountable to one another.

A girl texts the word “loser” to another girl.

A young woman was injured in an accident while texting, but it is stated and not shown; a young woman slips in the woods and almost goes over a cliff, but she hangs on.

A young boy takes 3 or 4 pills of Prozac from a young woman’s prescription bottle, and she was on it for depression; a woman makes a comment about a Margarita mix.

A few girls seen in shorts.

Tension between various characters as girls struggle to keep a pact not to get on social media for a time; a young boy is rushed to the hospital after taking Prozac pills and he goes into a coma, but he survives; a young boy got into a man’s chicken coop.