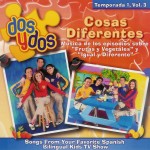 Dos y Dos – Cosas Diferentes is one of the musical soundtracks from the TV series Dos y Dos and features songs from the episodes “Fruits & Vegetables” and “Same & Different”. The music is fun for young children aged 2 through 7 and will be a favorite to sing over and over again. Each CD has every song in Spanish followed by an English version of the same song.

The songs in Cosas Diferentes are about eating healthy, very odd vegetables, and learning about all the different things in our world. Dos y Dos is currently televised on the LATV network throughout the country and broadcast only in Spanish. Dos y Dos is also one of the World’s only Spanish/English bilingual preschool television shows.

This is the CD with the wonderful music from the “Dos y Dos – Cosas Diferentes” show and containing all the delightful songs from the episodes in the DVD by the same name. This is the wonderful toe tapping music that the kids love to dance to just as they do when they watch the show. They will love to take it everywhere. We award this CD with the Dove ‘Family-Approved” Seal for all ages.

Sex: None
Language: None
Violence: None
Drugs: None
Nudity: None
Other: None