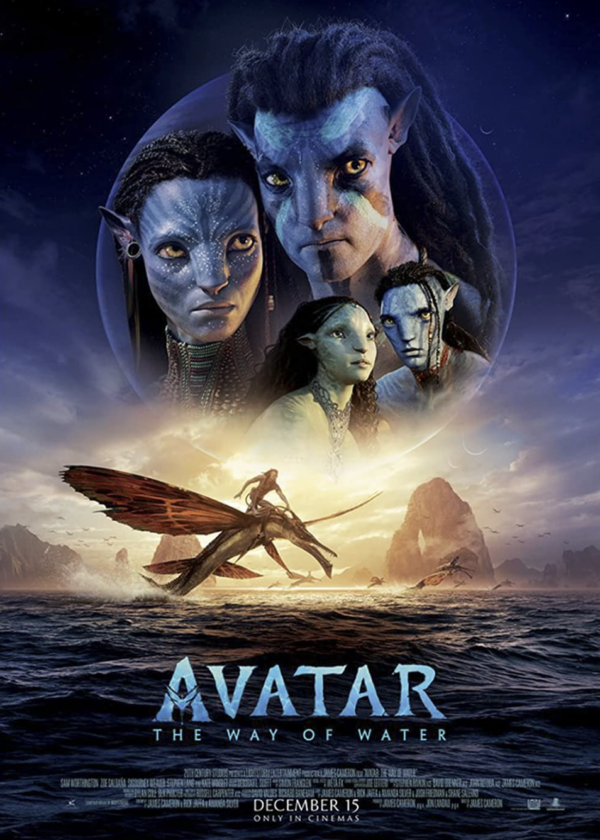 Avatar: The Way of Water

Thirteen years after the blockbuster release of Avatar, James Cameron takes viewers back to the planet of Pandora and the Na’vi people in Avatar: The Way of Water. Since the events of the first film, Jake Sully is now living fully as his avatar, along with his companion Neytiri and Neteyam, Lo’ak, Tuk, and adopted teenage daughter Kiri, the biological child of Dr. Grace Augustine. They live a quiet, peaceful life until the planet once again comes under siege from “The Sky People” who want to harvest its resources and trap the indigenous population, along with an elite resurrection squad of soldiers targeting Jake specifically. Jake and Neytiri now face the choice of protecting their family and their people or disappearing. Through their journey, they learn of new tribes, customs, and creatures, as well as learning how to function as a family. They prefer peace, but when war comes to their doorstep, they rally together to defend themselves, delivering a heartfelt and thrilling adventure for viewers.

In the years since the big battle where Jake surrendered his human form and took his place as a Na’vi, he has settled with Neytiri and their children in the forest among the Omatikaya clan. They are joined by friendly scientist Norm and Spider, a human child left behind who is close friends with the Sully children. The Resource Development Administration (RDA) once again targets the planet for its resources, forcing Jake to lead a resistance against it. But the RDA has a secret weapon, a resurrected, cloned to avatar version of Jake’s nemesis, Colonel Miles Quaritch, and his fighting men, intent to eradicate the Sully family. Faced with endangering their clan and family, Jake and Neytiri make a long journey to live among the Metkayina, a coastal, more amphibian clan living on a spread of islands. The children immediately have a rough time fitting in and learning the customs, while Jake and Neytiri just want to fit in and live peaceably. Their middle son, Lo’ak, in particular, faces intense struggles, sending him to the ocean to befriend a new whale-like tulkun creature, Payakan, who he communicates with.

Col. Quaritch and his team track the family to the islands and begin hunting them and the tulkun in hopes of drawing out the Metkayina tribe, who revere the creatures. Spider, who was captured in the forest, becomes a reluctant guide to help find the family, but his allegiances remain to the Na’vi over his own human counterparts. Jake and his family enlist their new friends in their efforts to defend their children and preserve their way of life.

Every frame of Avatar: The Way of Water is expertly crafted, intentionally made for high-definition 3D rendering. In fact, so much of it feels like peering in a window at a world beyond the viewers’ reach. It is a next-level accomplishment from a director who continues to challenge himself. Also, at more than three hours’ length, the film lets stories and characters breathe and not feel rushed. There is so much time devoted to the family fitting into their new surroundings and caring for each other that viewers may sometimes forget the eventual war that’s coming. When the time comes to fight, like the scenes of relationship building, it’s intense and memorable, guided by the man who gave audiences epic sequences in Titanic and Avatar.

Family is the theme of Avatar: The Way of Water, specifically how Jake earns his place among the Na’vi and how he and Neytiri raise their children to be leaders among their people. They lean on each and learn from each other and even in their rough patches, they always return to a place of respect and honor. They also ingratiate themselves with their new tribe by their innocence and humility. In a larger sense, the tribe also represents family and community, and it triumphs over those who would wish to usurp it.

The language of the film is very much in line with the original, with many PG-13 profanities thrown around, with an “F” word and others such as “a—hole,” “sh-t” and “b-tch.” Many characters and creatures are in peril and even killed, either by the soldiers or the elements, but they are not explicit or gory.

Even though Avatar was a landmark release, its sequel, The Way of Water builds on that and surpasses it in scope and story. It dives deeper into the mythology of Pandora and its inhabitants, giving more of a human connection for viewers. Because of that, the stakes feel much higher when the final, nail-biting battle arrives.

No overt Christian message. The religion on Pandora is integrated throughout nature, through plants that respond to human contact and animal type creatures the Na’vi can communicate with.

Jake and his family are positive role models, banding together when the time is right and looking out for those who can’t defend themselves. They are regarded as leaders for good reason.

Characters frequently engage in battle, with dire non-explicit consequences such as loss of life, and creatures being speared.

The Na’vi are CGI creatures but are dressed in tribal gear, such as loincloths and draped clothing. Spider, the human teen left behind, spends the film in a loincloth.