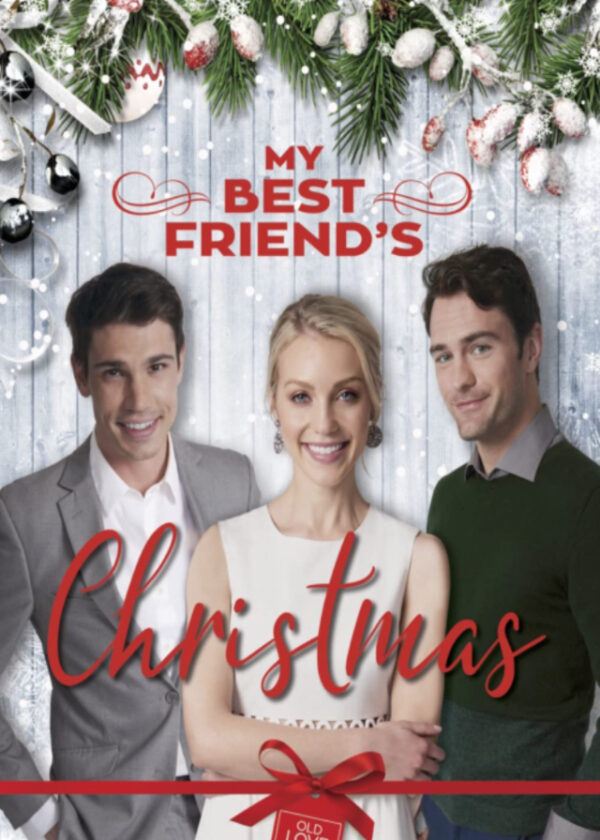 When a woman returns home to find her ex in a relationship, she enlists her best friend to act as her fake boyfriend.

The title of this romantic and festive movie is very apt, as it refers to the leading lady, named Ashley (Breanne Hill), and her close friendship with Liam Marsh (Colton Little). They are good friends who have a long-standing tradition of sharing gifts of Christmas ornaments each year, and this particular Christmas in this movie will be memorable for the two of them.

The movie is very scenic, and opens with festive shots of snow, a Santa, candy canes, baked goods, a red and white sleigh, little tin men, and little snowmen. Decorations are displayed throughout the city.

In a funny scene in the beginning Ashley’s supervisor, Deborah, is giving an inspirational speech at the Christmas party, and toasting to “residuals” which the employees will make! She likes Ashley’s co-worker, Liam, and Deborah stands under the mistletoe and eyes him! Liam heads for the exit!

Ashley sees a photo of her ex-boyfriend, Grant Hines (Tanner Novlan), on a friend’s phone. She comments that she’s acting like a creeper, looking at his photo. But her friend says, humorously, “It’s only creepy if they’re not cute!”

Ashley is also kidded about liking the guy and she shouldn’t be a weirdo by not reaching out to him. They live in different states, with Ashley residing in Los Angeles. “Can’t I just have my crush?” she asks. “You can, if it makes you happy,” her friend replies.

Ashley is going home for Christmas to see her parents and sister and brother-in-law, and when Liam helps her with her luggage, he teases her about the weight of the luggage. “Is that all just shoes?” he asks, knowing about her shoe fetish.

When Ashley arrives home, her mother asks how Liam is. “He’s fine,” she replies. “He certainly is!” replies her mother, and Ashley chokes on her drink for a second. Her mother has seen photos and likes Liam. She goes to fetch some club soda to help clean off Ashley’s sweater. It becomes apparent that Ashley’s mother, especially after meeting him when he too arrives for a visit, thinks Liam would be a good fit for her daughter.

Ashley’s ex, Grant, is dating a popular model named Bella. She is going to help Grant reopen his lodge for Christmas in Harmony, their old hometown. When Grant asks Ashley to meet him for dinner at the lodge, Ashely thinks it’s to rekindle their old flame. When Grant picks her up, Ashley’s family spies from the window to see who it is she’s with as they leave.

Ashley is excited as she and Grant sit across from one another at the table, and they discuss their dreams before they left home, and one of Ashley’s was to have a shoe station in her home! But the reunion goes south when Bella comes out of the kitchen and it’s a surprise to Ashley. Bella hilariously hugs Ashley about three or four times when she meets her. But Ashley, being both surprised and hurt at the revelation of Grant’s girlfriend, excuses herself quickly and leaves. Grant wants Ashley to help him throw a re-opening party for the lodge, but apparently that is all he wanted.

Ashley talks with her good friend, Liam, on the phone about it. She tells him she had bought Grant an edible flower arrangement and she thought they were about to rekindle the romance. She tells Liam that Bella is very pretty. “This is going to pass,” replies Liam. He tells her Grant is missing it by not picking her.

Grant and Bella stop by Ashley’s parents’ home to visit, to check on Ashley. While there, a postman is about to deliver a gift when Ashley grabs it and proclaims it’s from her boyfriend. She had planned to give it to Grant, but now she lies because of her embarrassment. And when Liam arrives for his visit, she grabs hold of him, and she claims Liam is her boyfriend. And when the two couples go to dance on the dance floor, Grant becomes jealous. One of the comedic scenes features Grant picking up two chairs at the same time to move them, like it’s nothing, and then Liam attempts to do the same thing, to show he’s strong too!

The movie features good acting and some terrific Christmas music, about Christmas carols, people putting up trees, and mistletoe. And, of course, some suspense, especially after Bella spots Grant kissing Ashley. How will it all end? Will Ashley wind up with Grant? Or does Liam step forward, as it becomes clear he thinks more of Ashely than just as a “friend.”

The movie wraps things up nicely, like a Christmas bow, and a catchy tune is played at the end, about Santa not taking “me off that list!” It speaks of a sweetheart too.

Included in the movie are a few drinking scenes and scenes of a toast, not to mention kissing and some angst by a few of the characters. Because it has earned it, we are awarding our Dove seal to the film for Ages 12+. The themes of finding true love, and showing forgiveness are commendable.

This holiday movie with its romantic twists can be enjoyed any old time of the year!

A man is a loyal friend to a woman, especially after she gets hurt; characters display forgiveness to one another; a woman helps a lady she had hurt.

A few drinking scenes of wine; a toast featuring wine and one with champagne.

Tension between characters; a woman lies to save herself from embarrassment, but the truth comes out a bit later.