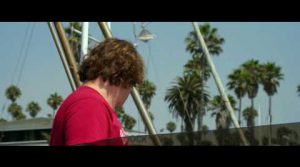 A big screen adaptation of "Gulliver's Travels," with Jack Black taking on the title role of Lemuel Gulliver, a free-spirited travel writer who, on an assignment to the Bermuda Triangle, suddenly finds himself a giant among men when he washes ashore on the hidden island of Lilliput, home to a population of industrious, yet tiny, people.
Watch Trailer
Watch Trailer
11
Negative Rating
12345
SexLanguageViolenceDrugsNudityOther
0
Positive Rating
12345
FaithIntegrity

This movie will make you show your teeth with laughter! Lemuel Gulliver (Jack Black) works in the mail room but longs for a more adventurous life which would include Darcy Silverman (Amanda Peet), a travel editor. When Gulliver works up enough courage to walk into her office to ask her out a misunderstanding leads to her thinking he is applying for a travel writer’s job. The free-spirited Gulliver winds up headed for the Bermuda Triangle and fate beaches him on the shores of Lilliliput where he is a giant compared to the little people who live there. They think he is an enemy but he begins to win them over, including a man who becomes his friend, Horatio (Jason Segel). Horatio is a commoner who longs to win the heart of Princess Mary (Emily Blunt) and Gulliver obliges with advice. He also stages his own shows for the people of Liliput and brings “Star Wars” and “Titanic” and “Avatar” to them for the first time!

Jack Black has his funny moments in this film, and we are approving it for ages twelve plus, but it may not be for everyone. There is a brief scene in which the little people drag Gulliver down with ropes and there is brief but complete rear nudity for a few seconds. Also, there is some language although not a great amount of it. Please consult the content listing below.

There were plenty of laughs at the screening I attended on Christmas day, and we are pleased to award the film our Dove “Family-Approved” Seal for ages twelve and above.

A large character is pelted with cannon balls but repels them; a woman slaps a man who insults her; a violent storm at sea; a fight between a man and a robotic creation with some hitting and punches thrown.

Kissing between two different couples; a woman asks a man what he loves about her and he points to her breasts and she replies that it is inappropriate; a giant girl uses a real human man and makes him kiss a doll.

A large character is pelted with cannon balls but repels them; a woman slaps a man who insults her; a violent storm at sea; a fight between a man and a robotic creation with some hitting and punches thrown.

A man holds a drink; a comment about going out for brews.

Little people drag character down with ropes including his pants and his rear is briefly but completely seen; cleavage; shirtless men; a Coppertone parody on a sign with a grown man and the dog tugging his swim wear down but it is difficult to see and is fleeting.

A character urinates on fire to put it out; a statue urinates and functions as a fountain; belching; a skull is seen.