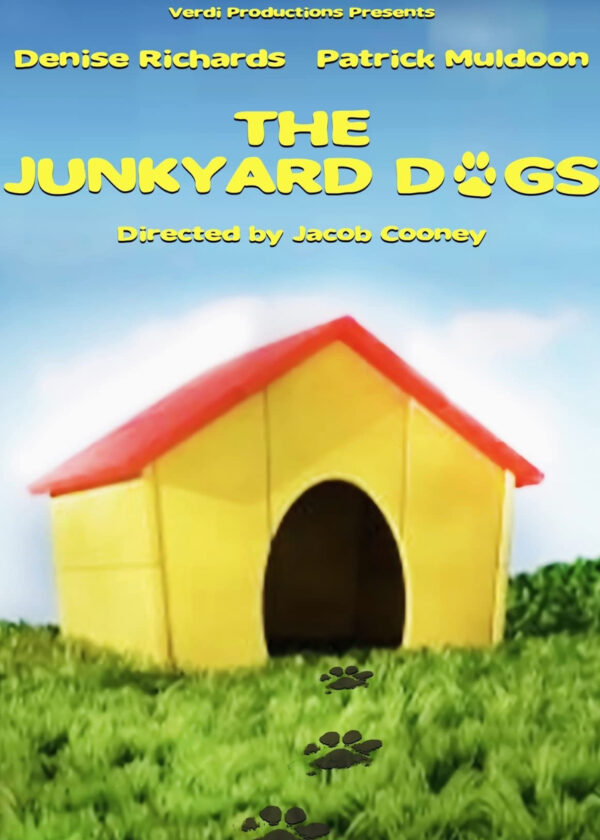 Follows a dog who is a master escape artist, who must team up with his puppy pals to prevent their block from being robbed.

There have been a lot of movie releases over the years with live-action dogs and cats speaking, but Junkyard Dogs is, actually, one of the funnier ones I have seen, featuring good acting and comic moments. In this case, it features only dogs, no cats, but the actors that play the humans are pretty good too! And the voices of the actors lip-sync very well with the dog characters they portray.

The story opens with a mailman, Crusher (Nick Principe), delivering Mrs. Hope’s mail at 5 p.m. instead of the usual 1 p.m.  And her dog barks at Crusher. “Pups will be pups,” Mrs. Hope says, and as he walks away Crusher mutters, “They should put a muzzle on that mutt!” But it would seem the dog had a good reason to bark at Crusher. Crusher is taking birthday money out of cards and stashing it in his pockets. And, when his old crime partner, Jimmy Dean (Sal Rendino), is released from prison, the two hatch a scheme to case the neighborhood of Crusher’s delivery route. When many of the people will be at a wedding of a neighbor lady, they plan to rob some homes. Looking for filled-up mailboxes, a sure sign the residents aren’t home, isn’t enough-but Crusher and Dean plan to cash in on a big night of robbery.

However, Monica Sullivan’s dog, Houdini (voiced by Taylor Vale) plans to protect both hearth and home. Monica is the one getting married, to a man named Shane DeSoto (Patrick Muldoon). She took matters into her own hands and proposed to him, getting down on one knee and showing him a ring. He accepted and so now the church is booked. Monica has two kids, Ava (Rhys Olivia Cote) and a son, Dominick (Andrew G. Bennett). The kids catch on way before Monica does that something is going on in the neighborhood, especially after Houdini tries to attack Dean. Little do the kids know that Dean used to date Monica back during their high school years.

Crusher and Dean spat back and forth, almost like an old married couple themselves. But they continue to plot to rob the neighborhood homes. One of the charms of the movie is the humor, which frequently features the two bumbling would-be crooks. In one scene Dean comments about one particular home which contains a remarkable flat-screen TV ad surround system, as well as other pricy items, Dean says it will be “Numero Uno” on their hit list. Crusher doesn’t understand the phrase. “Numero Uno?” he asks. “What does that mean? It’s like a card game?” In another scene Dean plots more robberies and gleefully asks Crusher, “Who’s going to stop us?” Crusher takes it literally and replies, “Superman?” “That was a rhetorical question” responds Dean.

The dogs have their comedic moments too. In one scene, Houdini is letting a lot of dog flatulence fly, and a female dog, Einstein, comments on his “release valve” working well!

In another humorous moment between the bumbling crooks, Dean, annoyed with Crusher, says, “Crusher, you truly are one in a million.” “Thanks, Boss,” Crusher replies happily. “It’s not a compliment,” replies Dean. There are a few similarities to the movie Home Alone but, as with that picture, this one has some genuine laugh-out-loud moments.

When the dogs unite to thwart the criminal plans, they all get involved including Houdini, Einstein, and Jackpot (voiced by Forest Quaglia). They plan to surprise the crooks and Monica will be surprised herself, when she is all prepared to marry Shane and has to come home to help stop the criminals. She also learns that the kids were smarter than she realized.

This a pretty wholesome movie, with some name-calling by, mostly, the crooks, such as “dummy” and “dunderhead.” It has procured our Dove seal for All Ages.

This funny movie can be laughed at and enjoyed by every family member, and there are laughs aplenty.

Images of Christ and his disciples are seen at the church during a wedding ceremony.

Both dogs and kids work to thwart the plans of would-be robbers; a mom and her fiancé look out for her kids.

Kissing by an engaged couple and then at their wedding.

Some physical violence played for laughs, of the dogs attacking the crooks.

Possible wine in one scene but it appears to be grape juice.

Tension between characters; in one scene a girl explains the dog went home to stop the crooks, and she says, “Duh, Mom, he went home to stop those guys,” but is the only scene in which some disrespect is shown, and the mother takes care of the situation; dog flatulence.