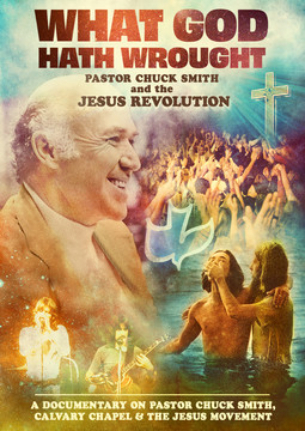 A documentary on the “Jesus Movement” of the late 60’s early 70’s. In the late 1960’s Calvary Chapel Costa Mesa was the epicenter of one of the greatest spiritual revivals in American History that would later be called the “Jesus Movement.” Its pastor Chuck Smith, by many considered “the Father of the Jesus Movement,” welcomed the hippie counterculture into his church and the rest is history …

This is a great DVD, which glorifies God and honors His servant, Pastor Chuck Smith. The documentary looks at Chuck’s involvement in the Jesus movement of the late sixties and early seventies. It spread out from California to the uttermost parts of the earth. This documentary looks at this instrument of God, Chuck Smith, and features comments by such prominent figures as Franklin Graham, Tim LaHaye, and his family including his wife Kay and their children.

In the DVD, we learn that Chuck accepted all people, long hair or not, and how God brought them out of drug use and drinking, to use them in the spread of the gospel via music and preaching. It is wonderful to see some of them now, still serving God, some 40 years later. They say it was always Chuck’s goal to simply teach the gospel, simply.

In the conclusion, we see how Calvary Chapel and other organizations planted churches worldwide, including churches in England, Asia, India and Russia. We are very pleased to award this DVD our Dove-approved Seal for Ages 12+. Watch this one soon and be prepared to be amazed at what God did and is doing.

A couple is seen kissing in a home video.

Talk of people having used drugs and alcohol.

Photos and videos of men in shorts and shirtless being baptized; a few girls in shorts.

Sophisticated themes of people being saved after using drugs and drinking; a lot of interviews which would prove to possibly be slow moving for young children.