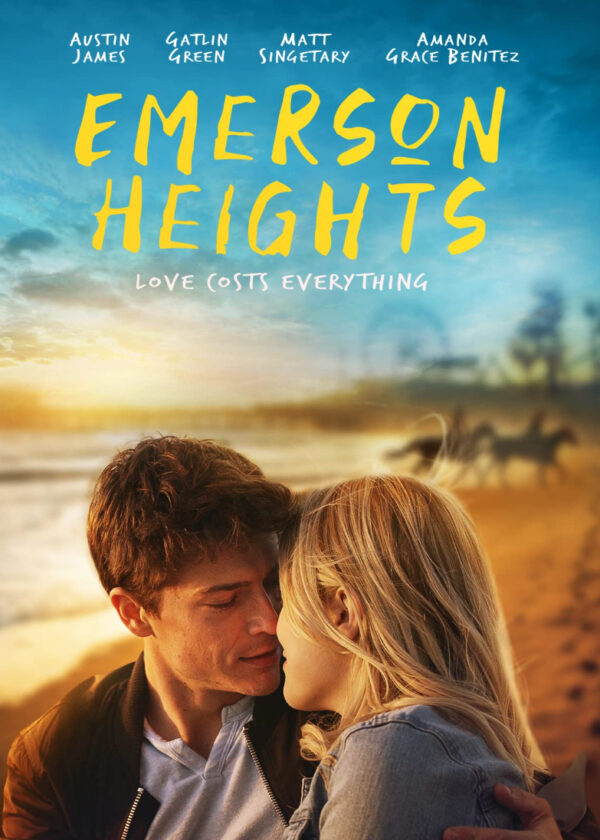 Emerson Heights is a story of love that seeks to answer the age-old question: Can you follow your passion, and still follow your heart? When Cody McClain (Austin James), an aspiring actor trying to make it in Los Angeles meets Briley Williams (Gatlin Kate James), he is immediately smitten. However, he soon learns that Briley is from New York and has to return home. Not one to let things get in his way, Cody pursues her anyway. They begin a long-term love affair, and attempt to beat the odds of long-distance relationships. However, when Cody’s career takes off and he is the lead of a blockbuster film, he struggles to juggle his newfound stardom and his feelings for Briley. His struggle intensifies when his co-star, Haley (Amanda Grace Benitez), reveals her feelings for him, and his manager, Vick (Matt Singletary), seeks to keep his career on track at all costs.

This is a fairly wholesome story about young love that is presented, in a lot of ways, in an old-fashioned manner. Cody McClain (Austin James), a young actor, falls for a fellow actor and singer, Briley Williams (played by Austin’s real-life wife, Gatlin Kate James).

In an early humorous scene, Cody has to sign for something and he tells a store owner, Wanda, to hold onto his signature, that it will be worth a lot one day. “I’ll frame it,” she dryly replies.

Cody is shopping and spots Briley when she walks in. They immediately make eye contact, and it is obvious that they are attracted to one another, especially when every time Briley glances over at Cody he is still staring at her! “Hello,” offers Briley, and they introduce themselves. Cody invites her to a pool party, an excuse to get to know her, because there is no planned pool party! He later tells his mom that he panicked but he is sure he can make it happen! Briley accepts and Cody kicks it into gear, inviting his friends to the pool party but they all have plans. His mom tells Cody not to propose on the first date! He believes he has met the woman he will marry. When Briley shows up at the pool, and it’s just Cody (plus an old couple in the pool), she realizes she’s been set up. “This place is really popping!” she says. But they hit it off and, despite the fact Briley lives in New York and Cody is in L.A. they plan to stay in touch with letter writing and an occasional visit.

As they talk Cody tells her he hopes to do more acting but that he was in a pretzel commercial. “I knew that was you!” she says. He learns that she loves to sing and is hoping to do a musical one day. They climb a fence to sit in beach sand and to talk at night. Cody asks her to sing a song for him. “Right now?” she exclaims. She begins singing Over the Rainbow and is doing a commendable job when she’s interrupted by someone yelling at them to get out, so they move on. When Cody returns home, practically floating on air, he tells his mom, “Mom, it’s official, I’m marrying that girl!”

Later, with Briley back in New York, they talk on the phone after Cody has landed a major role in a movie. She tells him his face is all over New York.  He says it’s everything he had hoped for. Later, when she returns to California, he takes her to Santa Monica Beach.  They run toward the tide, he lifts her up and spins her, and she sings more of Over the Rainbow for him. She meets his family and his sister Bryce immediately embarrasses him, telling Briley he has not shut up about her for 10 months. She also tells Briley that Cody is right, Briley does have beautiful eyes. His mom adds that Cody speaks highly of her! “I think it’s sweet,” she says, and she pinches his cheeks.

Another sub plot involves Briley’s younger sister, Emerson, who puts her dog in a pink tu-tu! Emerson begins to read the story of her sister’s love affair with Cody, and she asks her grandmother if it will have a happy ending. “It’s not always about a happy ending,” says her grandmother. “Sometimes it’s just about the journey.”

During another trip to L.A. Cody and his mom and sister, with Briley in tow, visit the sights including the Hollywood Walk of Fame with the various stars. Cody has to stop a few times to sign an autograph or pose with an adoring fan.

Later, back in New York, Briley winds up playing Dorothy in a Broadway musical, The Wonderful Wizard of Oz. She is a big hit, and she hopes Cody can visit and see the show. We see a Reserved sign in a seat for much of the play, reserved for Cody, and Cody makes it at the very end. This causes some tension between the two but he tries to make it up to her by getting them a stylish hotel room with a great view and a candelight dinner.

It needs to be noted that in an early scene at his home, Briley comes downstairs to the couch where Cody has been sleeping, having slept in his room. She snuggles up next to him but nothing else happens at this point. Later, in New York, he-fully clothed-lies on top of her and they kiss and then the scene cuts away to the next morning when he is gone, having had to catch an early flight back to L.A. to be on a movie set. Although he is faithful to Briley, even refusing his co-star Hayley’s advances, his work begins to interfere with Cody staying in touch with Briley. They are devoted to one another in an old-fashioned kind of way. Yet, she learns she is pregnant with his child and sends him a letter, which Cody’s agent hides from him. How will it end? Will they eventually get back together? Does Briley have a boy or girl?

Due to their commitment to one another in the movie, and the fact that their one-night stand is mainly teased, and that they have, otherwise, a wholesome relationship, the movie has earned our Dove seal for Ages 12+, but parents should consult the content listing and make their own informed decisions. The film is, overall, a wholesome story of young love.

This story of a modern old-fashioned love is nicely portrayed by the young leads, and it clearly shows that the storms of love can be weathered if there is a true commitment.

A man is loyal to his girlfriend despite pressure from a co-star; a couple works at maintaining a long-distance relationship.

A couple kisses a few times; one older couple kisses in a pool; a man, clothed, lies on top of a clothed woman and begins to kiss her; we later learn the woman is pregnant and she intends to have the baby, although her doctor had told her “termination” was an option.

Drinking in a couple of scenes, including champagne and the girl is just under-age.

Swimwear including a girl in a bikini; shirtless men.

Tension between characters; an actress attempts an affair with a man who is already in a relationship, but he turns her down.